Guillermo Rigondeaux vs. Liborio Solis on Feb.8 on Russell Jr. vs. Nyambayar in Allentown, Pa

By Robert Addams: Former WBA/WBO super bantamweight champion Guillermo ‘The Jackal’ Rigondeaux (19-1, 13 KOs) will be facing Liborio Solis (30-5-1, 14 KOs) in a rescheduled match on February 8th on the undercard of Gary Russell Jr. vs. Tugstsogt Nyambayar in Allentown, PA. Rigondeaux vs. Solis still isn’t official yet, but it’s expected to take place on the card, according to Dan Rafael.

Rigondeaux and Solis were supposed to fight last December

They were supposed to fight last month on December 21 on the undercard of Tony Harrison vs. Jermell Charlo 2 rematch in Ontario, California, but Solis had issues with his visa, and couldn’t make the fight.

After 10 years of fighting at 122 and being out-sized frequently by bigger fighters, Rigondeaux, 39, is moving down to 118 to compete against fighters the same size as him.

Since losing to Vasiliy Lomachenko in 2017, Rigondeaux has bounced back nicely to defeat Giovanni Delgado and Julio Ceja by knockout wins. Rigondeaux looked impressive in both fights.

Solis has had bad luck

For his part, Solis, 37, has won his last five fights. He lost to former WBA World bantamweight champion Jamie McDonnell by a controversial 12 round decision in 2016. A lot of boxing fans felt that Solis was robbed in his loss to the British fighter McDonnell in their first fight. As a result, the two of them fought a rematch in November 2017, McDonnell suffered a cut in the 3rd, and fight was subsequently halted and ruled a no contest.

There was no third fight between them. McDonnell kept his WBA title, and dodged a bullet in escaping the Solis threat without losing his title. However, six months later, McDonnell’s 4-year title reign came to an abrupt halt with Naoya ‘Monster’ Inoue detroying in a 1st round knockout in May 2017. The judges couldn’t save the day for McDonnell like they had in his controversial win over Solis in 2016.

The talented former Cuban amateur star in looking to reinvent himself at bantamweight, but he’s going to have a tough time in the weight class. Rigondeaux, who finished his amateur career with an incredible 463-12 record, could wind up facing WBA Super World bantamweight champion Naoya Inoue in the near future if he beats Solis on February 8.

If Rigondeaux were still in his prime, Inoue would have a lot of problems with his defensive skills, and his powerful left hand. But with Rigondeaux almost 40, Inoue would be a heavy favorite if the to were to face each other in 2020. 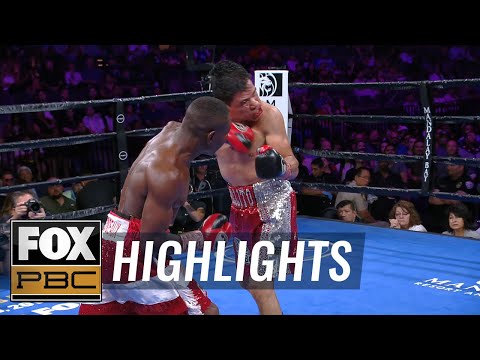 Gary Russell Jr. (30-1, 18 KOs) will be defending his WBC World featherweight title against undefeated #1 WBC Tugstsogt Nyambayar (11-0, 9 KOs) in should be an exciting fight. Nyambayar, 27, is a 2012 Olympic silver medalist from Mongolia. The 5-year pro Nyambayar has been given a quick push up the rankings in part due to his outstanding amateur career, and his wins over Claudio Marrero and Oscar Escandon as a professional.

The 31-year-old Russell Jr. will be making his 5th defense of his World Boxing Association title that he won five years ago in 2015 in stopping Jhonny Gonzalez in the 4th round. Fighting just once a year on average, Russell Jr. has failed to take full advantage of his time as the WBC 126-lb champion by doing the minimum to hold onto his title.

Russell Jr. has been satisfied with fighting just once a year, but it’s not helped his popularity. By fighting only once a year, it’s clearly kept Russell out of view of a lot of boxing fans. So instead of Russell Jr. getting a lot of attention at 126, Leo Santa Cruz, Shakur Stevenson and Josh Warrington are the guys that get talked about a lot.