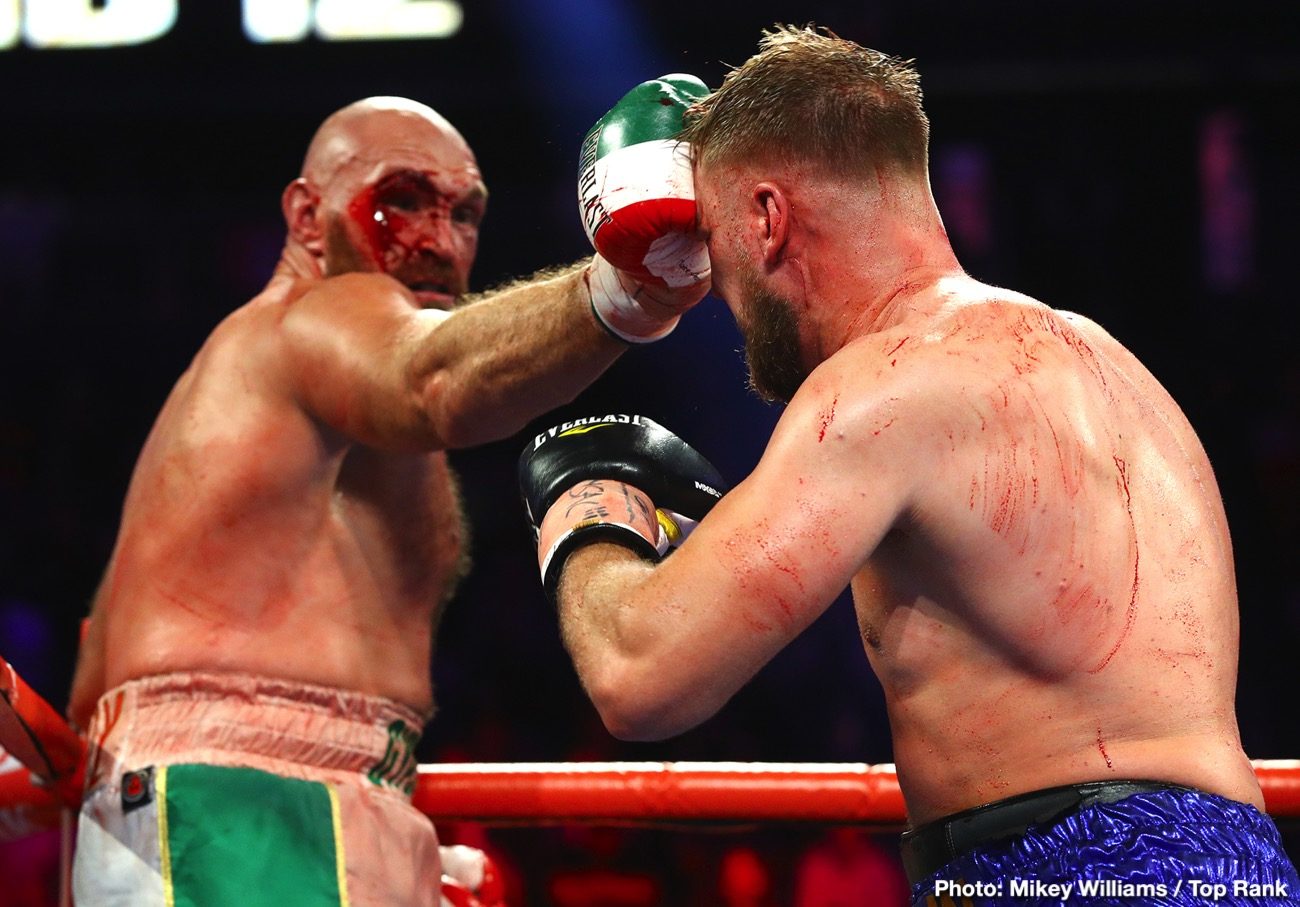 By Scott Gilfoid: Eddie Hearn has mixed feelings about Matchroom fighter Anthony Joshua showing up to assist Tyson Fury with sparring to try and help him prepare for his rematch with Deontay Wilder on February 22. Hearn worries that Fury (29-0-1, 20 KOs) could cut again if he spars with Joshua.

Fury suffered a bad cut in his last contest against Otto Wallin (20-1, 13 KOs) on September 14, and the MASSIVE gash required an insane 47 stitches to close. There’s been a lot of second guessing about the ringside doctor’s decision to let Fury fight the entire match without him stepping in to have the fight stopped.

Since Hearn WANTS Fury to beat Wilder (42-0-1, 41 KOs), he’s apprehensive about Joshua (23-1, 21 KOs) lending him a hand in sparring. Joshua can punch, and if Fury gets hit on his still healing right eye, the cut could pop open. That would lead to a delay of Fury’s scheduled rematch with Deontay on the 22nd of February. Hearn has hopes that Fury will fight Joshua in a unification fight at some point.

“I wouldn’t be surprised if he went out there,’ said Hearn to iFL TV about Joshua going out to spar with Fury. “It’s a bit weird because he might fight the winner. Josh is his own boss, if he fancies it, he’ll just go. Doesn’t matter what I or [Joshua’s trainer [Rob [McCracken] will say, he’ll just go. I wouldn’t want to open up that cut.”

With a cut the size that Fury has, it doesn’t require a big puncher to open it. You can argue that a child would reopen Fury’s cut if they popped him on that eye. That’s why it was odd that the ringside doctor didn’t call a halt to the Fury-Wallin fight once Fury was BADLY cut in the 3rd.

If the fight had been stopped, Fury would have lost, and that would have potentially messed up his rematch with Wilder. Let’s be real. The Wilder vs. Fury rematch would still happen, but ‘The Gypsy King’ would no longer have his unbeaten record.

“That fight [with Wallin] was supposed to be stopped. Everybody knows that,” Wilder told ESPN.com. “But, of course, they don’t want this man to lose because of me. They want the big fight. We understand that. People are not dumb. They were supposed to stop that s— and Wallin would have won.”

If the ringside doctor had stopped it, Fury would have lost. It’s hard to believe that that fight wasn’t stopped. That cut was massive, and bleeding all over the place.

In hindsight, Fury would have likely been better off if the contest was stopped, because now he’s going to take on Wilder and the cut is likely going to be reopened almost immediately. Heck, Wilder is already vowing to open up Fury’s cut, and have him bleeding on the night.

Fury reportedly did get plastic surgery, but it probably won’t matter. With a cut that required 47 stitches to close, there’s likely going to be a lot of scar tissue over that eye. Moreover, Fury only has 5 months for his cut to heal.

That’s not very much time for a cut that you can drive a Mack truck through to heal. You can argue that that the Wilder vs. Fury rematch should be postponed until June or July so that Fury’s cut has more time to heal. That’s not going to happen though.

It’ll be surprising if Fury makes it through training camp without his cut reopening. For him to get anything out of sparring sessions, they’re going to need to bring in big guys with punching power. Having a big heavyweight around the same height as the 6’7″ Wilder hitting Fury in training camp is going to be perilous.

If they choose to not allow Fury to be hit in the head during his sparring sessions, then that won’t help him prepare for Deontay. He might as well not spar at all, because he’ll be in shock when he gets inside the ring with Wilder.