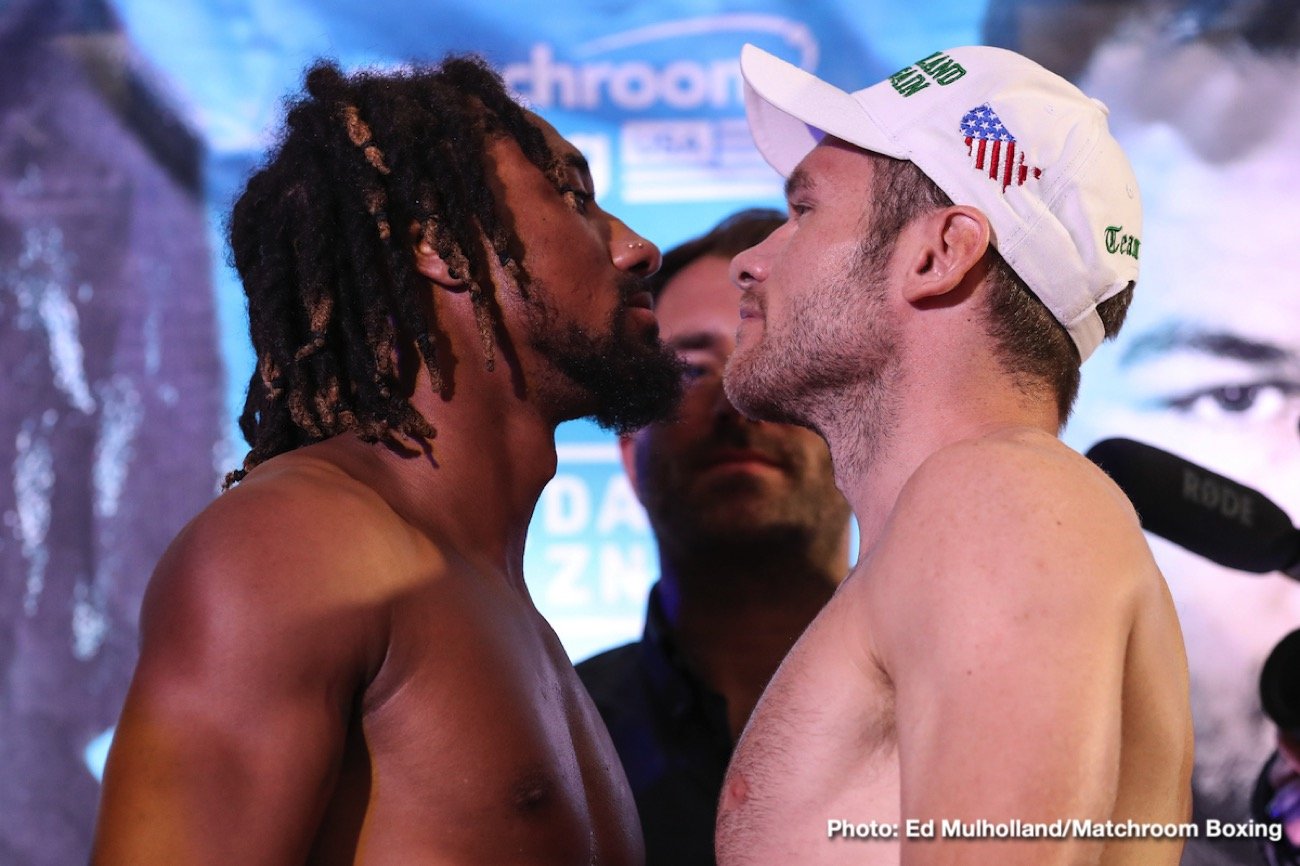 By Kenneth Friedman: WBO middleweight champion Demetrius Andrade weighed in at 159.6 lbs for his title defense against Luke Keeler on Thursday night on DAZN at the Meridian at Island Gardens in Miami, Florida. Keeler (17-2-1, 5 KOs) weighed in at 159.4 lbs.

This is a BIG step up in class for Keeler, who has mostly been fighting at the British level during his career. You can argue that the only reason Andrade is fighting Keeler is because his promoter Eddie Hearn is British, and this is a fight that will have some interest in the UK by fans. However, Keeler isn’t a big name even in the UK, but there will be some fans that will want to watch it.

Demetrius wants to put pressure on Canelo and GGG

Andrade, 31, says he wants to put pressure on Canelo Alvarez and Gennadiy Golovkin to fight him, but he’s going to fail in doing that if he continues to fight guys like Keeler. To put pressure on GGG and Alvarez, Demetrius needs to be fighting the better middleweights. If he can’t get them to fight him, he needs to move up to 168 to fight some of the talented fighters in that division.

Hearn says he’s going to renew his offer to WBC middleweight champion Jermall Charlo to get him to fight Andrade (28-0, 17 KOs). It’ll be interesting to see if Hearn has any luck at doing that.

Considering the level of opposition that Charlo (30-0, 22 KOs) is facing right now, you’d have to say that Hearn is wasting his time. Charlo seems satisfied in defending his WBC title against the likes of Dennis Hogan and Brandon Adams.

IBF super featherweight champion Tevin Farmer (30-4-1, 6 KOs) looked solid in coming in right at the 130lb weight limit for his title defense against the talented Joseph Diaz Jr. (30-1, 15 KOs). This is one of two fights that Philadelphia native Farmer, 29, intends on taking at super featherweight before he moves up to lightweight in search of greener pastures.

There’s not much for Farmer at 130 right now, as the best fighters are with Top Rank Boxing, and they fight on a different network.

At least with Farmer moving up to lightweight, he’ll have the chance to fight the likes of Devin Haney, Ryan Garcia, Luke Campbell and Gervonta ‘Tank’ Davis. With those kinds of fighters in the division, it’s a wonder why Farmer is bothering to stay at 130 beyond this fight with Diaz Jr. on Thursday.

This will be Farmer’s fifth defense of his International Boxing Federation super featherweight title he won in 2018 in beating Billy Dib. Sadly, Farmer hasn’t taken advantage of his 2 years as a world champion in holding down the IBF title.

Farmer’s 4 defenses have come against these fighters:

Some fans believe that Farmer has been milking his title since he won the strap, and they may be right. But after Thursday night, they won’t be able to say that because Diaz Jr. can actually fight. His only career defeat came against WBC featherweight champion Gary Russell Jr. in 2018. Diaz has beaten some really good fighters during his eight-year pro career.

These are the best guys Diaz has beaten:

Diaz’s resume is so much better than Farmer’s that it’s hard to compare them. With the level of guys that Diaz has beaten, he should be the favorite to win this fight.

Akhmadaliev, 25, is a 2016 Olympic bronze medalist from Uzbekistan. He should push Roman a little, but he’s not expected to win. Akhmadaliev is going up against a very good champion in Roman, and he doesn’t have the professional experience after 7 fights to deal with what he’s going to be seeing. Akhmadaliev has heavy hands, and he’s dangerous if you stand in front of him and slug. But he struggles against fighters that use movement, and are crafty.

Cuban two-time Olympic gold medalist Robeisy Ramirez schooled Akhmadaliev in the 2016 Olympics. The difference in talent between the two fighters was huge. Akhmadaliev was out of his league in that fight, and ended up losing by a 3-0 nothing score.

Since turning pro, Akhmadaliev has wins over these fighters:

Other weights on Thursday’s Andrade vs. Keeler card: 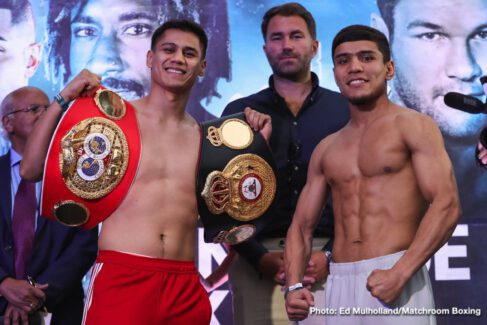 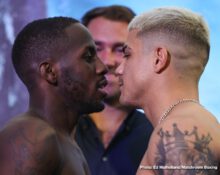 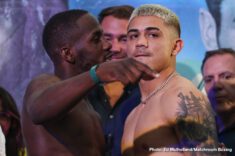 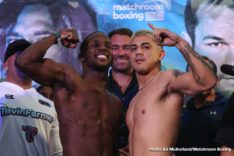 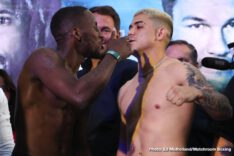 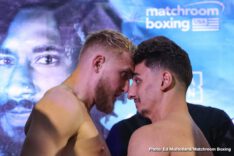 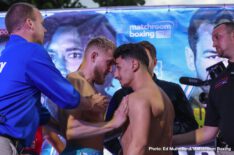 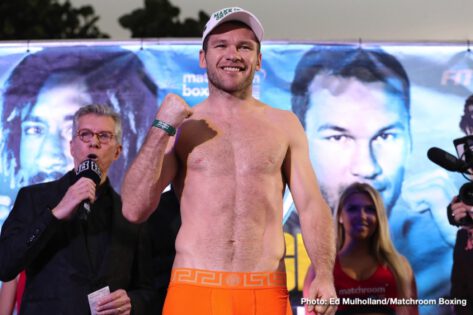 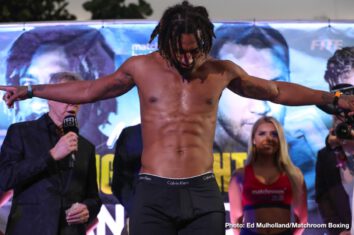 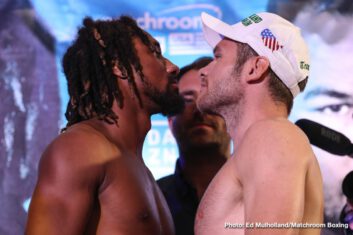 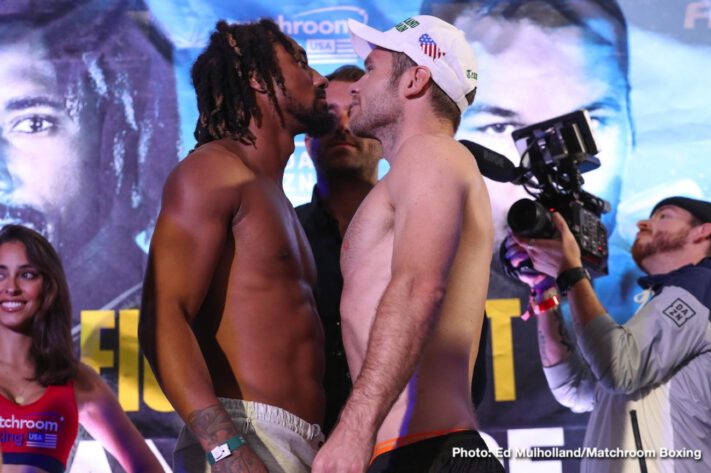