Tyson Fury: ‘I’m going to take it out of the judges hands’

By Scott Gilfoid: Tyson Fury shockingly predicting he’s going to ‘take it out of the judges’ hands and knockout Deontay Wilder in their rematch on February 22. Fury’s lack of power could make it all but impossible for him to achieve his knockout prediction against Wilder.

Fury is still bellyaching about not getting the decision in his fight last year against the powerful 6’7″ Deontay (42-0-1, 41 KOs) on December 1 in Los Angeles, and he now feels he’s got to knock him out in order to get the win.

Tyson still complaining about his draw with Deontay

Fury thinks he deserved a one-sided victory over Deontay last time they fought, and he believes he as up 10 rounds to 2. The judges saw a different story with them scoring it a 12 round draw. All the running, slapping and holding Fury did to nullify Wilder’s offense prevented him from impressing the judges.

You hate to break this to Fury, but in boxing, judges have the say so when scoring the fights. It’s not up to the fighters to say, ‘I won 10 rounds to 2, now give me the belt.’  If the sport ever sinks down to the level where the fighters are able to score their own fights, then Fury can crown himself the champion when he faces talented champions like Deontay.

“I’m looking forward to setting the record straight. I beat him last time 10-2,” said Fury to @CollegeGameDay in still bellyaching about not winning. “Got a draw, very controversial. This time’s going to be different, I’m going to take him out, take it out of the judges’ hands,” said Fury in predicting he’s going to knockout Deontay.

Oh my, Fury’s wins over Tom Schwarz and Otto Wallin has really gone to his head. He now fancies himself as a knockout artist.

If Fury tries to take the fight to Wilder, he’s going to be asking for it. The last time the two fighters fought each other, Fury got dropped twice when he attempted to stop Wilder in the last 4 rounds. Fury was lamenting afterwards his decision to try and KO Wilder. He was wishing that he kept boxing him. Now 12 months later, Fury has forgotten the lesson Wilder taught him last time. It looks like Fury didn’t learn his lesson proper.

Gilfoid was hoping Fury would take the high road by giving Wilder credit for knocking him down twice, and rallying to tie up at the end. Regrettably, Fury isn’t willing to do that. 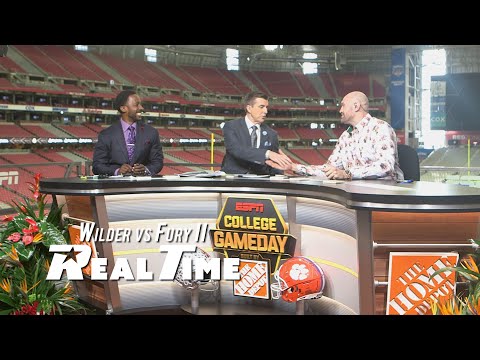 Spoiling for 12 rounds is no way to try to unseat the WBC champion. That might work for Fury against most of his other opponents, but against world champions, you have to actually fight them.

In his last fight, Fury couldn’t even knockout Otto Wallin. Indeed, Fury was the one that was hurt in that fight, and he was lucky the ringside doctor didn’t halt the affair after he suffered 2 MASSIVE cuts his his right eye in round 3.

“We’re going to go back to basics. I trained with SugarHill Steward back in 2010, we got on like a house on fire,” said Fury about his new coach. “And I was going a little bit stale, repetitive, doing the same things day in, day out for years. I needed a change.”

In a lot of cases having a new trainer changes zero. We saw that with Gennadiy Golovkin switching out Abel Sanchez for Johnathon Banks, and it didn’t help him one bit. Fury recently swapped out Ben Davison for Javan ‘Sugarhill’ Steward and Andy Lee. It’s unlikely this new team will change things for the better for Fury, because he didn’t change when he moved from Peter Fury to Davison. There’s no difference at all.

At 31, Fury’s fighting style is stuck in position beyond change, in Gilfoid’s view. What you see is what you get with Fury. He can play musical chairs all he wants with his training team, but it’s not going to help him take Wilder’s right hands any better. If Fury couldn’t handle Wilder’s immense power last December, he sure as heck won’t be able to take it now a year later.

You can argue that Fury’s punch resistance has decreased since Deontay knocked him out in the 12th round last year. Top Rank fed Fury a couple of soft opponents hoping to increase his popularity in America, and boost his confidence. It didn’t help. Wallin had Fury on Bambi legs in the 12th round in their fight last September in Las Vegas, and probably would have finished him he’d hurt him earlier.

Frank Warren to Shakur Stevenson on Josh Warrington fight: ‘Our man wants it. Where are you?’  »