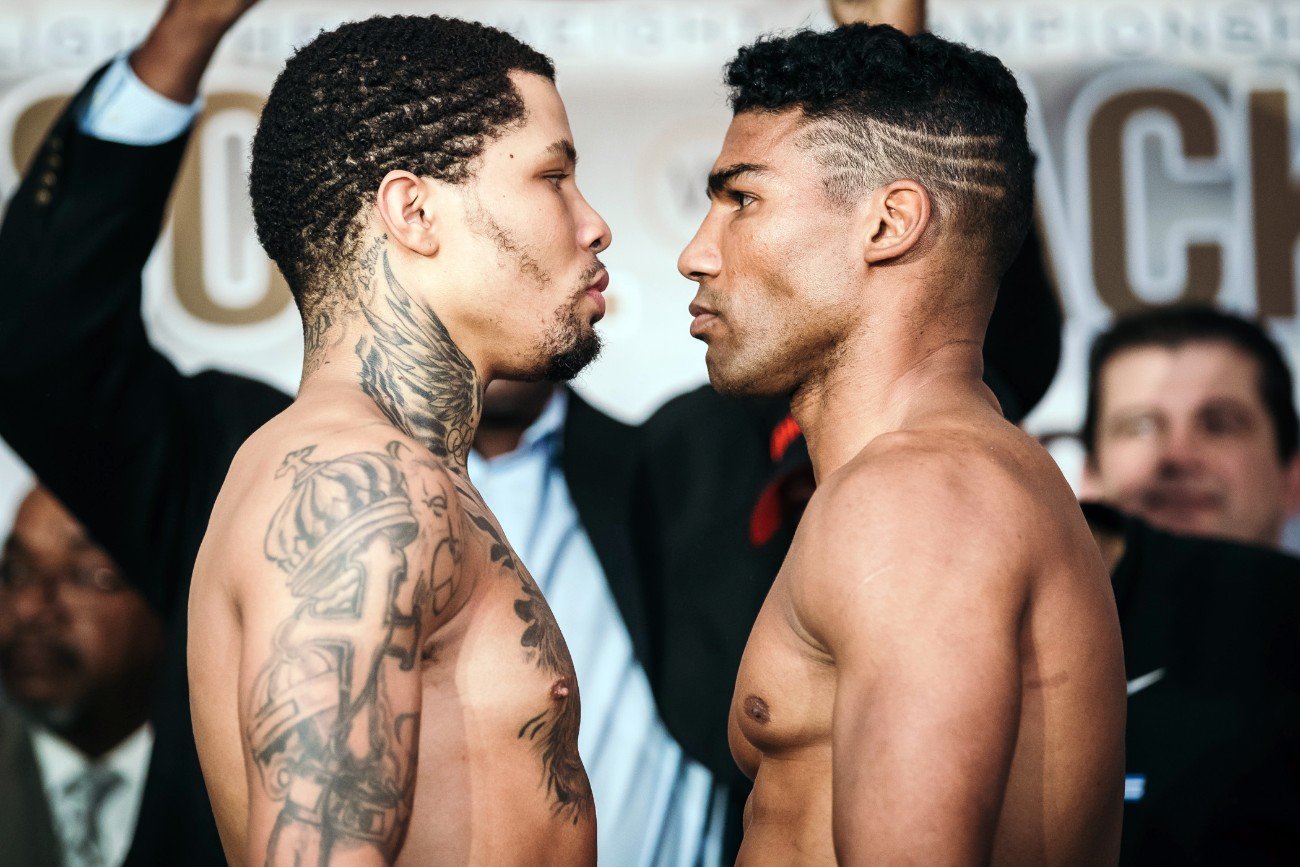 By Dan Ambrose: Mikey Garcia isn’t impressed with Gervonta ‘Tank’ Davis’ fight tonight against Yuriorkis Gamboa on Showtime in Atlanta, as he views it as another mismatch Davis. Mikey views it as a garbage fight, and a likely easy victory for the 25-year-old former IBF/WBA super featherweight champion Tank Davis (22-0, 21 KOs).

The former four division world champion Garcia rates Davis highly as a fighter, but he’d like to see him in against better opposition like Vasiliy Lomachenko, but he doubts that fight will ever take place

“S— fight. An easy fight for Tank,” said Mikey to Fighthype on the Gervonta Davis vs. Yuriorkis Gamboa fight. “Tank hasn’t been fighting anything. Honestly, who has he fought? Nothing but a bunch of f— nobodies, really. That’s a challenge? No. Gamboa is 39 or 40-years-old. That’s how old he is. No,” said Mikey when asked if Gamboa is a young 39-40 like Manny Pacquiao.

“He hasn’t been active. Anybody would tell you that,” said Mikey about Gamboa. “I’m not talking s— on Tank. I’m just saying his opponents are nothing. It’s a nobody, and it’s not a challenge. Tank is way better than the guys he’s been facing, but that’s what they face him against,” said Garcia.

Davis has fought one good fighter during his career in Jose Pedraza, but Mikey is accurate in saying he’s fought nobodies. However, Mikey hasn’t fought great opposition. Apart from Mikey’s fights against Orlando Salido and Errol Spence Jr., he’s fought no one special.

Mikey’s brother Robert Garcia pulled him out of his fight against Orlando Salido in the 8th after he broke his nose. It was a situation as Julio Cesar Chavez Jr’s recent fight against Danny Jacobs. The fight had turned around with Salido coming on, and starting to work Mikey over.

It was interesting to learn that Mikey thought Chavez Jr. had made a mistake in quitting against Jacobs, because he basically did the same thing in his own fight with Salido.

As soon as Mikey suffered a broken nose, Robert pulled him out of the fight. It looked like a weak move done to save Mikey from getting knocked out, because Salido was coming on. Mikey had shot all his fireworks off in the first six rounds, and he was tired when the fight was stopped.

Gervonta will take care of business against Gamboa

“He’s going to go in there and take care of business, and knock him out just like he’s knocked out the last two guys in the 1st round,” said Mikey on Tank Davis’ last two opponents. “That’s the type of quality opponents they’ve been putting him in against.

“Do you even remember the names? No,” said Mikey of Davis’ recent opponents. “Nobody remembers because they’re not meaningful. That’s who they put in front of him, and he’s going to go in there and take care of business,” said Mikey about Gervonta.

This fight could be a lot more competitive than Mikey expects it to be, given that Davis had to lose 1.2 lbs after coming in overweight for his weigh-in with Gamboa last Friday. Who knows how much weight the plump Davis had to lose to get close to the 135 lb limit during training camp. At the weigh-in, Davis weighed in at 136.2 lbs, which was 1.2 lbs over the contract weight of 135 lbs.

With Mikey fighting on DAZN, you have to wonder whether his comments made about Davis is him being a team player in talking negatively about a fighter from a rival network.

Mikey’s best fights in his career have been against these guys:

“That’s his job, to go in there and knock these guys out,” said Garcia bout Tank Davis. “But these guys are not challenges, they’re not a threat, and they’re not nobody. It could happen, but it’s not something that’s likely going to happen. Gamboa is experienced, and was a champion before, but that was a long time ago.

“He’s probably had two or three fights in the last five years,” Mikey said on Gamboa. “It’s just a nobody. I think it’s a former name, that’s all it is. But Tank is going to go in there and knock him out. That’s what he’s supposed to do. If he doesn’t knock him out, then we talk s— on Tank for not knocking him out, because he’s expected to knock him out. I think he’s going to knock him out in three rounds or less. It should be.

“The fight itself is not attractive for that reason, because the opponent is not there,” Mikey said in further downgrading the Davis-Gamboa fight. “Tank is a great fighter, and he’s got skills. He’s f— strong, he’s fast, and he’s got skills. He’s shown it in the past, but the challenges that he’s been fighting lately have not been challenges. That’s not his fault, and that’s who’s available or who they’ve matched him up against. He’s got to go in there and take care of business,” said Mikey.

After just 6 years as a professional, Tank Davis has fought almost the same amount of quality guys as Mikey has in his 13-year pro career. Mikey has fought only 2 good fighters in Spence and Salido, and the rest decent but not great. Davis could easily wind up with a better resume than Mikey when he’s done with his career.

“That’s a good fight,” said Mikey when asked about Gervonta fighting Vasiliy Lomachenko. “Of course, everybody would find that fight exciting. That would be a good fight with both fighters primetime, and they’re both at the top of their game. That’s a good fight, but I doubt that’ll ever happen. So why even talk about it.

“There’s a lot of fights that will never happen,” said Mikey. “I know the media and reporters always ask and ask, but it’s a waste of time, because you’re never going to see a lot of these fights. If you’re lucky to see them, then we talk about it. One they’re on the bill, set and paperwork and all that, then we’ll talk about it,” said Mikey.

Lomachenko vs. Davis would be a good fight, but it’s not likely to happen. Davis’ promoters at Mayweather promotions aren’t expected to agree to a fight with Loma until he’s older, and no longer in his prime. Right now, that fight clearly isn’t going to happen.


« Hearn talks strategy for Canelo to fight Golovkin in September

Tyson Fury: ‘I’m going to take it out of the judges hands’ »