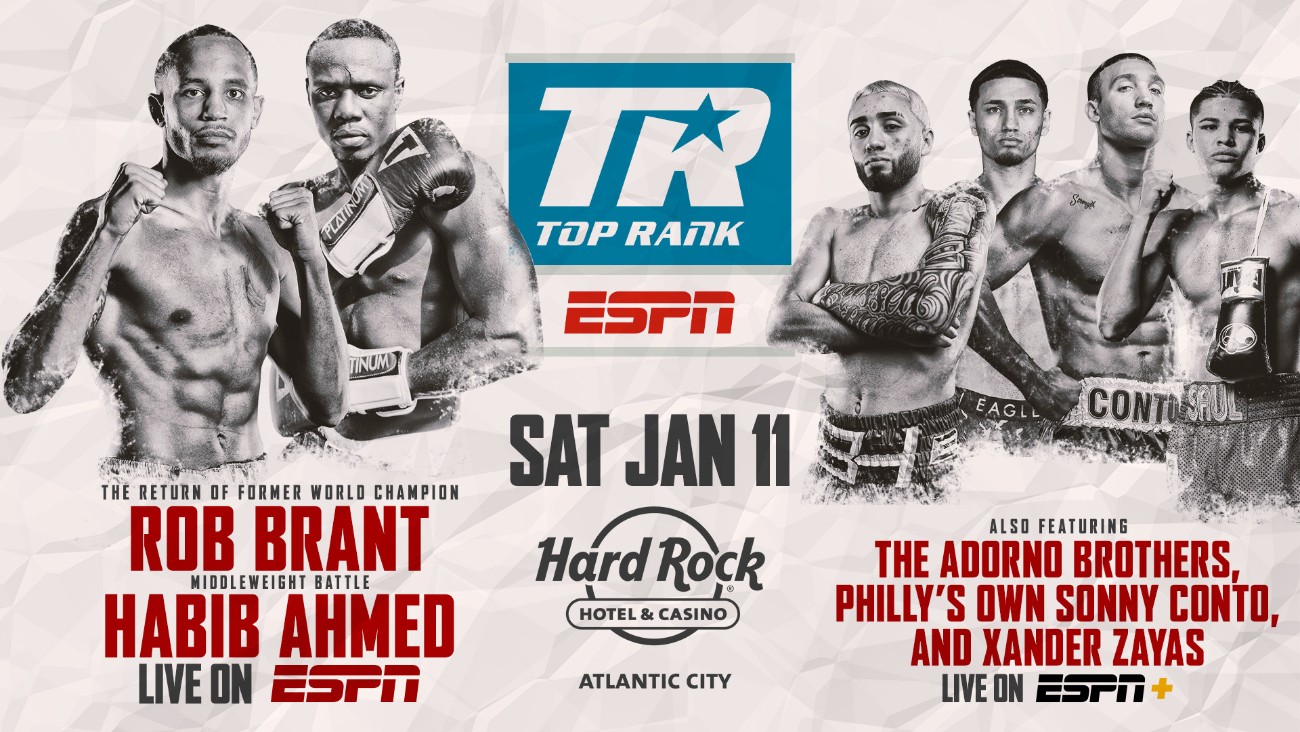 “I am excited to be back fighting under the Top Rank banner with a new team,” Brant said. “Training in Colorado Springs has shown me what it’s like to work with a coaching staff that have mastered their craft. I am expecting a tough fight with Ahmed, as he has proven to be a dangerous Ghanaian fighter. I’m confident my team will train me to showcase my talent. There hasn’t been a day that has gone by that I haven’t thought about regaining my title. None of that happens until I conquer the task at hand. I will reign again as a world champion.”

“This is a great opportunity to prove I am a middleweight to watch,” Ahmed said. “Super middleweight was not my natural weight, and I feel fresher and more powerful since moving down in weight. Rob Brant and his team made the wrong choice for a comeback opponent. I am coming to shock the boxing world and earn another world title shot.”

Brant (25-2, 17 KOs), from St. Paul, Minn., authored one of the biggest upsets of 2018 when he bested Murata over 12 scintillating rounds in Las Vegas. He threw 1,262 punches that evening and followed up his title-winning effort with a dominant 11th-round TKO over Khasan Baysangurov in Hinckley, Minn. In July, he traveled to Osaka, Japan, and Murata flipped the script, engaging in a toe-to-toe battle that lasted 5 minutes, 34 seconds. Murata landed 64 power punches in the second round before referee Luis Pabon stopped the bout.

Ahmed (27-1-1, 18 KOs), from Accra, Ghana, is best known for his February 2018 title challenge against Gilberto “Zurdo” Ramirez, which ended via sixth-round TKO defeat. He moved down to middleweight in May, notching a shutout eight-round decision over Juan De Angel in Biloxi, Miss. Ahmed has been training in Miami recently and has sparred with the likes of former world champion Andre Dirrell.

The ESPN+ undercard stream, which begins at 7 p.m. ET/4 p.m. PT, will include the following bouts:
The fighting Adorno brothers will once again appear on the same undercard. Older brother Joseph “Blessed Hands” Adorno (14-0, 12 KOs) will face Hector Garcia (14-7-3, 8 KOs) in an eight-round lightweight bout, while 18-year-old Jeremy “Magic Hands” Adorno (3-0, 1 KO) will battle Artrimus Sartor (4-3, 1 KO) in a four-rounder at super bantamweight.

Heavyweight prospect Sonny “The Bronco” Conto (5-0, 4 KOs), who hails from South Philadelphia, will make his Atlantic City debut in a four-rounder against an opponent to be named.

Xander Zayas (2-0, 2 KOs), the 17-year-old welterweight fresh off a first-round TKO Nov. 30 in Las Vegas, will see action in a four-rounder against Antonio Duarte (2-2, 0 KOs). Zayas, a native of San Juan, Puerto Rico, won 11 national amateur titles before signing a pro contract with Top Rank at the age of 16.