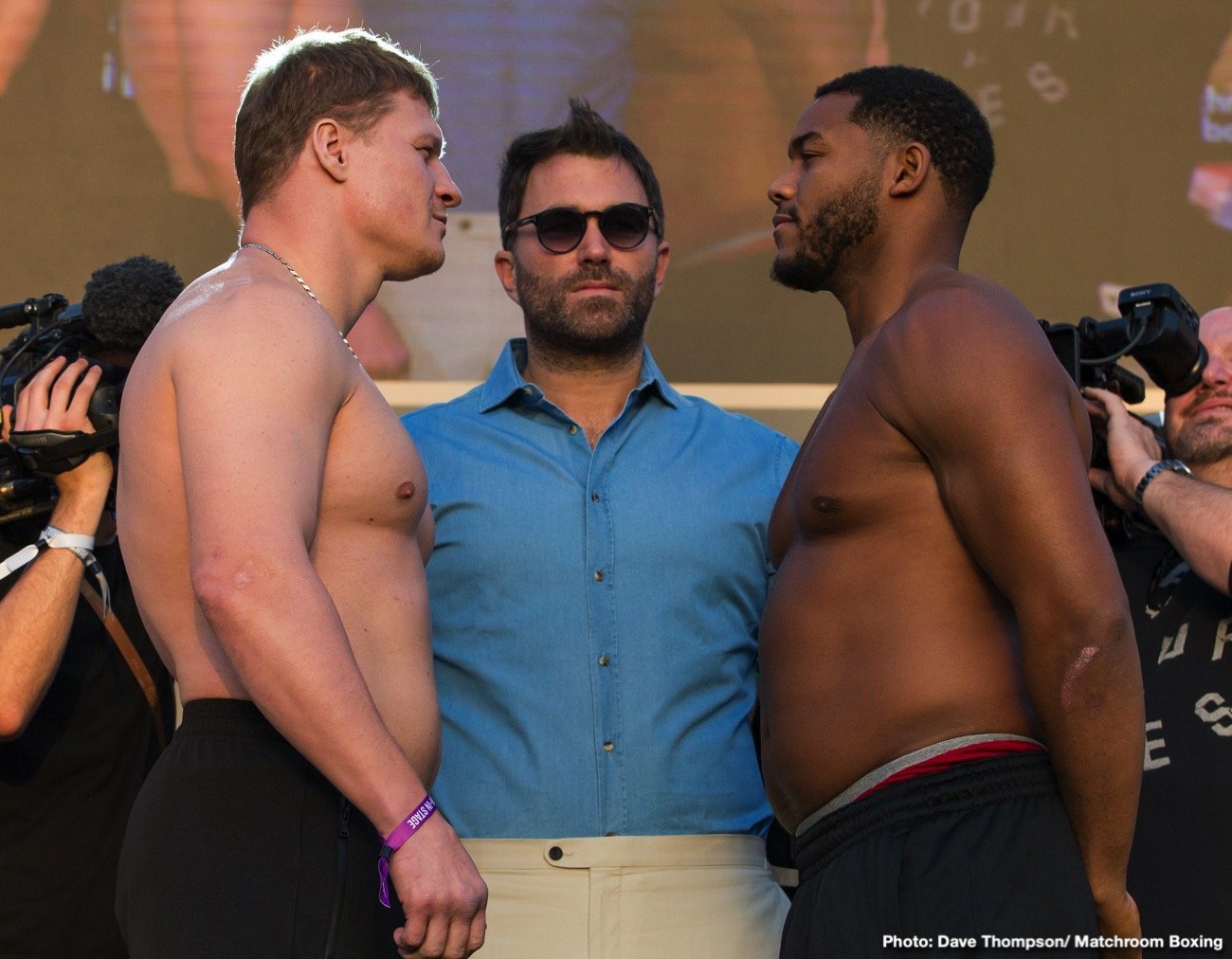 By Charles Brun: Michael Hunter (18-1, 12 KOs) understands he’s got a hard fight in front of him in Alexander Povetkin (35-2, 24 KOs) this Saturday night in their co-feature bout on the Anthony Joshua vs. Andy Ruiz Jr. card at the Diriyah Arena, in Diriyah, Saudi Arabia.

Like in his recent fight against Martin Bakole (15-1, 12 KOs), Hunter is the underdog in the view of a lot of boxing fans. He’s taking on a highly experienced fighter in former WBA heavyweight champion Povetkin (35-2, 24 KOs), and it could be the toughest fight for him since his loss to Oleksandr Usyk last year. However, Povetkin doesn’t possess the wheels that Usyk used in defeat Hunter, and that’s going to make it hard for him to get the better of him.

Usyk was getting outworked by Hunter when he tried to slug with him, and he was forced to get on his bike and box in order to win.

“This is a big test for me. Povetkin has been at the top for a decade now,” said Hunter to IFL TV. “I plan on showing my skills, and who I really am come Saturday. And I was the underdog, a 7-1 underdog. I felt kind of disrespected for them to do what they did, and try to make me as the opponent, and m being the underdog.

“They didn’t know who I was, and they had overlooked the situation. They had a high toll to pay for it, and they did. That was a great fight,” said Hunter about Sergey Kuzmin. “He was a young, strong bull, and I wanted to get him out of there. I was fortunate to drop him, but he wasn’t as hurt as I would like him to be.

“I couldn’t just jump on him, and he was just a strong opponent. In the Kuzmin fight, I called him [Povetkin] out, because I knew this would be a fan friendly fight. I like to please the fans, and I like to attend to the crowd,” said Hunter.

At this point in 40-year-old Povetkin’s career, he’s performing below the levels of Kuzmin and Bakole. Povetkin was a good fighter during his prime, but he’s dropped off considerably from the fighter he three years ago. Although Povetkin has only lost 2 times since 2014, those were the only two talented fighters he’s faced. Hunter is going to be a real problem for Povetkin on Saturday night, and we could see a minor upset.

Fighting Povetkin overseas is a dream come true for Hunter

“It brings excitement to the sport. I’m not the type of fighter who has to get prepared for this person or has to fight only this style or that style,” said Hunter. “I’m a purebred fighter. My dad was a fighter, and my brother. It’s in my blood. Anybody the fans want me to see, I’m down for it. I’m looking to perform on Saturday night, and after that, we’ll go from there.

“I just want to please the fans, and give them what they want. If a title shot isn’t what they’re asking for just yet, we’ll probably go another way. We just want to shock the world.

This is a dream come true for me. I’ve always wanted to fight across the world and go to different countries, and perform at my best, and watch the people and be the people’s champ. This is another opportunity for me to do that here in Riyadh. I know I have a very tough task in front of me. He’s a gold medalist, a champion kick boxer,” said Hunter.

The boxing public wants to see the 31-year-old Hunter tested against the best heavyweights in the division. They want to see Hunter fight these guy:

Those are the Big Four when it comes to the top heavyweights in the division. Povetkin is not one of the elite heavyweights anymore due to age, and he looked poor in his last two fights against Joshua and Hughie Fury. Povetkin beat Fury, but he didn’t dominate the way he should have.

“He has a ton of experience when it comes to this fight game. He’s going to be poised, because he’s a vet,” said Hunter. “There are different things that I’m going to have to overcome, and I might not even see until I get in there, because of him being a veteran.

“Come Saturday night, you’re going to see me do my very best when it comes to stopping him, and winning. We’ll see what happens,” said Hunter.

For Hunter to knockout Povetkin, he’s going to need to attack him and throw a lot of punches. That’s normally how Hunter knocks out his opponent. In his last fight against the 6’4″, 258 lb. Sergey Kuzmin on September 13, Hunter failed to let his hands go enough to knock him out.

While Hunter did drop the 32-year-old Kuzmin in the 5th round, he didn’t have the firepower to finish him. Hunter came into the fight weighing 221 lbs, and he lacked the size and the strength to do the job.

For Hunter knockout Povetkin, he’s going to need to throw a lot of shots consecutively, because he doesn’t hit hard enough to KO him the way Joshua did last year in September in stopping him in the 7th round at Wembley Stadium.

“I can’t pick a winner,” said Hunter when asked who wins the Andy Ruiz Jr. vs. Anthony Joshua rematch. “I would be biased to go with Andy Ruiz, because I trained with him. But there’s a lot of different things that I see.

“He’s [Ruiz] cool, calm and collected. They gave him time to get ready for this fight. When he beat him [Joshua], they [Matchroom Boxing] didn’t give him any time.

“We don’t know how Anthony Joshua is going to hold up, and have all the pressure on him. This is something really new to him. I’m not sure who will win, but I think Anthony Joshua needs to keep his mentality, and be as cool as he can be,” said Hunter.

As you can see, Hunter doesn’t want to show bias by picking Ruiz, since the two of them sparred together for his career. It would be interesting to know how Hunter held up with the sparring from Ruiz. That had to have been tough on Hunter due to Ruiz’s hand speed, combination punching and power.

Hunter is a good fighter, but he’s still essentially a pumped up cruiserweight. Him and Oleksandr Usyk have failed to bring what little power they had at cruiserweight up to heavyweight.

Ruiz is a better fighter than Joshua throwing punches

“Even in the way he speaks, he’s talking about wanting to try to hurt him [Ruiz] in a bad way,” said Hunter. “But like I say, it depends on his mentality. His nature is to fight. I don’t think Anthony Joshua, when it comes to throwing punches in the terrain, I think Andy is much better when it comes to that.

“I think he [Joshua] would have to get him on the outside, and then try to take him over and destroy him, and come from a longer distance, which I think he has the ability to do that. But will he is the question?” said Hunter about Joshua. 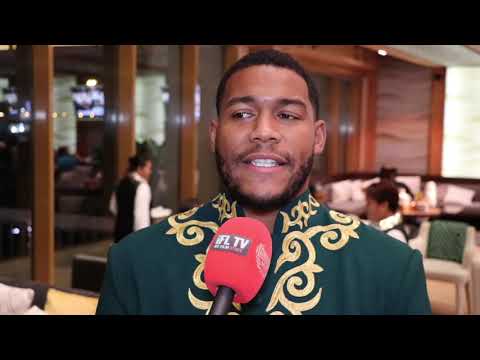