My take on Ruiz vs Joshua II 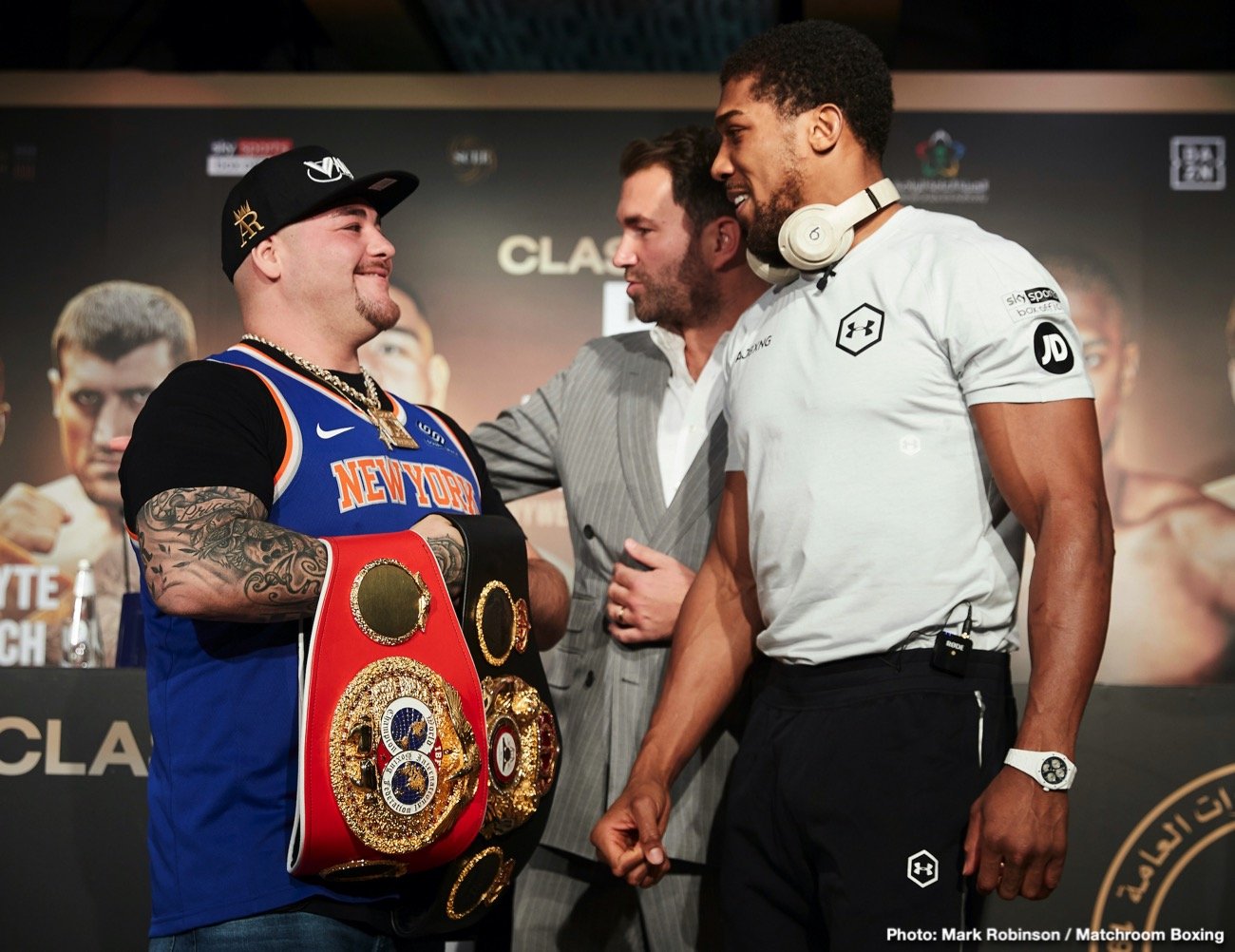 By Ronan Mcilhennon: That’s look at the first fight. Six weeks before, Anthony Joshua was set to make his American debut against the big talking Jarrell ‘Big Baby’ Miller, in his mind he was making a big world statement. Who better to make your American debut against than a loud talking New Yorker, whose linguistic skills could really help the Pay-Per-View numbers. Fast forward and in stepped this soft spoken round Mexican Andy Ruiz Jr. who most give no chance.

Could he fight? Yes, but AJ would walk through him, well how wrong could we be. Not only did Ruiz have the skills, he also had the heart and shocked the world,. They both would have entered the first fight with a game plan and 1min into round three both them game plans went out the window. As soon as Ruiz got hit that fight completely changed from a tactical battle to a slug fest.

What was wrong with Joshua? He did not look his usual relaxed self, rumours circulated that he was concussed from a knock out in sparring weeks before although they were put to bed as simply that, rumours. Although something was clearly different with Joshua’s demeanour, he had made the oldest mistake in boxing and overlooked his opponent. He had listened to and read the criticisms about the choice of Ruiz. He maybe even felt a little embarrassed by the difference physically, yes some inside of boxing give Ruiz a good chance but most the fans and pundits seen this fight ending whenever Joshua wanted it to end. Joshua’s mind, as Cus D’Amato (trainer of Mike Tyson) used to say of his young prodigy, was not on his work. He put the work in in the gym, he trained as hard as he had done in previous camps but his main focus was on distractions outside of the ring. From A list celebrities to old school rap artists , Joshua was feeling the love from all sides and that drew his attention away from the task at hand.

Rob McCracken’s instructions although basic , were correct. Keep your hands up, use your height and throw straight shots. It was Joshua who would not or could not implement those tactics, choosing to keep his left hand dangerously low and look for power shots. He believed that once he landed Ruiz was collapse and that’s exactly what happened, problem was as soon as Ruiz’ back side touched the canvas the fight had changed and was time for him to adjust. While Ruiz was adjusting Joshua was back in the locker room celebrating with all them A list stars and old school rap artists. It was not in Joshua’s mentality that he would have to adjust in this fight. He did not think he would need to, his amateurish conversations with McCracken only added to the confusion, as Joshua could not apprehend that he was in a real fight.

On that night in New York, Ruiz not only took Joshua’s belts, he took all his self belief and confidence also. He knows now he can hurt Joshua, he knows now he is faster than Joshua, he knows now that he can out fight Joshua and he knows now that he can make Joshua quit, and that is crucial, because on June 1st that is exactly what Joshua done, he quit. He was not mentally prepared that night and Ruiz Showed the world this major flaw. This is a great obstacle that Joshua is going to have to overcome if he is going to take those belts home again.

Both men will start the second flight with a game plan but as the fight plays out, the fighter who is able to adjust his game plan will be victorious. Coming into this second bout lighter, Joshua will look to use his natural advantages and keep Ruiz at length, Ruiz will try and slip that jab and attack head and body with combinations, but at one stage in this fight both fighters will have to adjust.

Ruiz will look to get closer and turn it into another slug fest, but what can Joshua do? If his plan A is not working does he have a plan B or C to fall back on? Well in his previous fights his plan B had been to become the aggressor and go toe to toe relying on his power to get him out of trouble and until he faced Ruiz it had. Problem is now that Joshua’s plan B is the same as Ruiz’ plan B and the Mexican is better at it. It’s not advisable to have a slug fest with a Mexican especially in the heat of a desert, and it’s of this writers opinion that it will turn out that way. Some say that Joshua and Matchroom are cashing in by staging this fight in Saudi Arabia and maybe they are. If Eddie Hearn was correct when he said Joshua would have the final say in location, it’s an odd choice to say the least for such a crucial career defining fight, although the £60 million Joshua is reportedly receiving will soften the blow if he does have to enter into he who needs him club.

Repeat or revenge? At one stage this fight will turn into a slug fest, its at that point that it comes down to heart and determination something that both men have had to show in the past although a slug fest will always favour Ruiz and it’s this writers opinion that we will see a repeat knock out victory for Andy Ruiz on Saturday night.

Boxing » Anthony Joshua » My take on Ruiz vs Joshua II