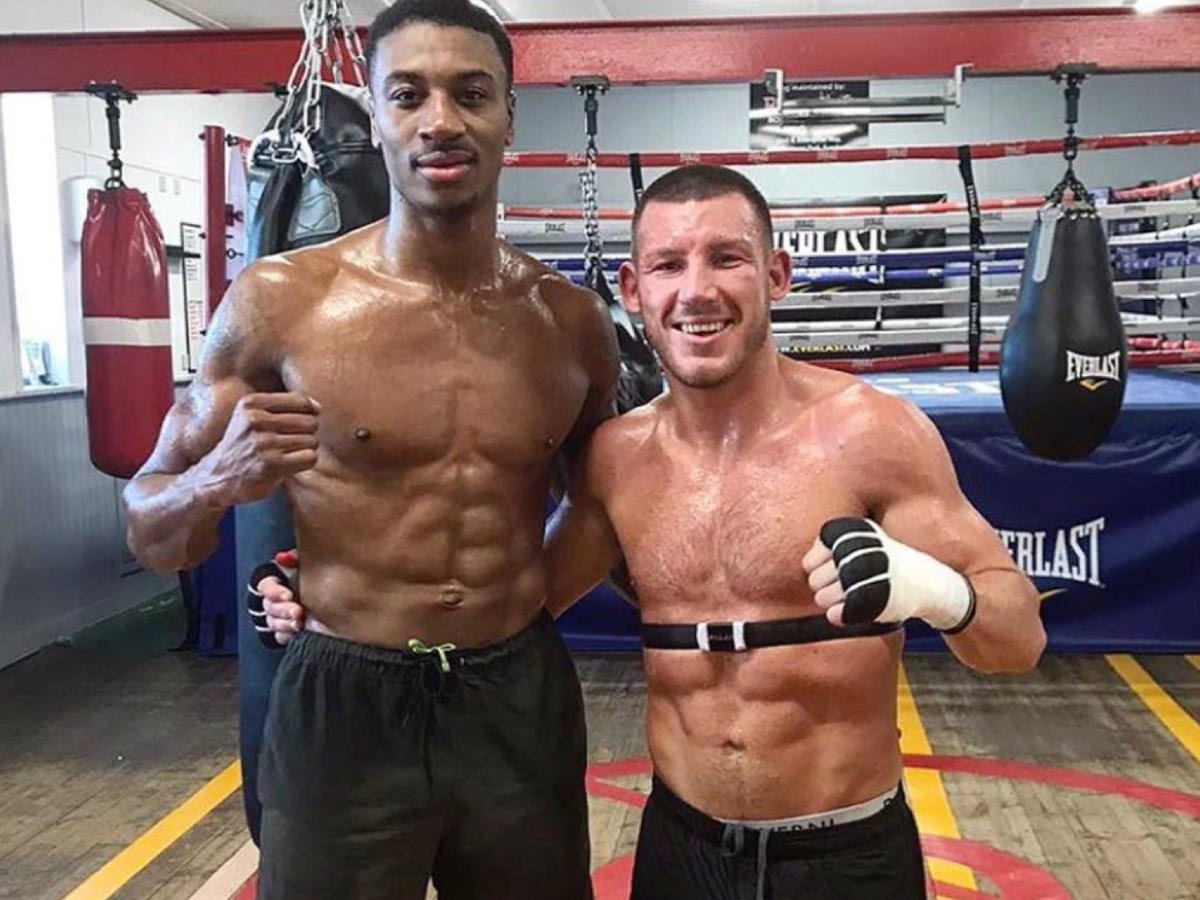 PREPARATIONS HAVE BEGUN in earnest for Liam Williams’ December 21st eliminator against 6’5” Alantez Fox as pictures emerged of him sparring with Light Heavyweight Shakan Pitters.

Explaining the decision to seek out the 6’6” Brummie, Williams said: “He’s two weights above me, a good two stone heavier than me and he’s taller than my opponent.”

He added: “You’ve got to train for worse than what you’re going to get, it makes it easier on fight night.”

Asked how he found sparring someone so much bigger, he confidently declared himself “comfortable with it”.

“It can be difficult,” he admitted, “you can think you’re out of range and then get pinged with silly shots but for my first spar with a guy that size? It went very well!”

The bout with the WBOs #1 ranked Middleweight Fox was only announced yesterday and already the war of words between the two world class fighters has begun.

When questioned as to why he had referred to Fox as a ‘rat’ on social media, the Welsh banger quipped: “he’s just a skinny little rat, isn’t he?”

“When I say things I mean business. I’m willing to back it up. He’s just one of those who chats sh*t to build buzz for a fight. When I say I’m going to smash him up I really mean it.”

Liam, 21-2-1 with 16 KO’s, is on a five fight finishing spree and is convinced that he can add another knockout to his record come December 21st.

“All he has is height and reach. It’ll be a difficult fight but as long as I come fully prepared, and stick to my game plan, I believe I’ll walk away with an easy victory.”

And his prediction for how it’ll end?

“I always enter the ring with bad intentions. I want to stop him inside the distance.”

With a #1 ranking with the WBO up for grabs it’s difficult not to ask ‘The Machine’ his thoughts about a potential 2020 battle with World Champion Demetrius Andrade.

Williams is a fan of the champs skill in the ring, saying: “He’s very good – He’s an awkward, tall southpaw.”

Never failing to get a dig in on his next opponent, though, he’s quick to point out that he believes Andrade “brings a lot more to the table than Fox” and is a “two weight world champion for a reason.”

But Williams also sees holes in Andrade’s game that he believes will give him a chance when they finally meet: “He usually looks good for the first couple of rounds, but then he goes to sleep for a bit.”

Before he can tackle the “boring” Demetrius Andrade and reach his goal of being World Champion, however, he must first tackle the tall order that is Alantez Fox.

And with tough sparring in the shape of 6’6” Light Heavyweights like Shakan Pitters on-hand, Williams and his team are confident he won’t fall short come December 21st.

ALANTEZ FOX has warned Middleweight banger Liam Williams that the “doctor is going to have to save him from himself” come December 21st.

The American boxer, ranked #1 by the WBO, was responding to a wild interview by Williams where he referred to Fox as a “skinny little rat” and predicted he’d bank an “easy victory” for British boxing.

The pair do battle on Queensberry Promotions’ ‘The Fight Before Christmas’ card at the Copper Box Arena, which will see Heavyweight prospect Daniel Dubois headline against Kyotaro Fujimoto.

But the fight with the most immediate World Title permutations is the one between Williams and Fox, with the winner perfectly poised to challenge Demetrius Andrade.

Asked about his championship ambitions Fox said: “I don’t know if Liam is world level but I know he won’t be the man to stop my rise to a world title.”

Williams raised eyebrows earlier this week when it was revealed he had brought in the giant 6’6” Light Heavyweight Shakan Pitters to mimic the equally lofty Fox in sparring.

His opponent, though, doesn’t believe there is anything the Welshman can do to improve his chances come fight night.

When questioned as to what sort of sparring partners he’d brought in to prepare for the December 21st bout, Fox simply said: “Better, sharper fighters than Liam Williams.”

Fans’ mouths were watering already at the idea of the two squaring off but the anticipation has reached new heights since Williams’ began branding ‘lanky’ Alantez a “skinny little rat”.

Fox, however, thinks this is just a trick Liam is using to psyche himself up for war.

“I think he needs to not like me in order to talk himself into this fight” he said, before joking “I told him to call me Master Splinter, I am the sharpest rat he has ever seen!”

Fighting for the first time in the UK can be intimidating for any fighter, with British fans famed for creating a raucous atmosphere, but Fox insists he’s up to the task.

“I’m very excited to travel to the UK. UK fans are amazing and incredibly supportive of their fighters. I am looking forward to putting on a great show and not only beating Liam Williams but taking all his fans as well.”

And when asked for a prediction of his own he was quick to channel his inner Brit.

“I believe his coaches, doctor or the ref are going to have to save him from himself because as you Brits say, I’m going to beat the stuffing out of him.”

Having lost only one fight in his professional career, Fox has every reason to feel confident and his manager, Mike Borao, believes his man is going to bring a few surprises to East London too.

He said: “I think Williams is going to be shocked and overwhelmed by the fighter he is facing on the 21st. On the night, Alantez Fox will show why he is the WBOs number one ranked middleweight contender.”

With the WBO Champion Andrade waiting just around the corner for the victor, both men are adamant they are the one to step up and wrest the title from his control.

And if Fox is right, Williams may yet need to be saved from himself but the fans can certainly be safe in the knowledge they’re guaranteed a Christmas cracker of a fight come December 21st.

ALSO ON THE SHOW

Sunny Edwards (13-0) fights for the vacant British super flyweight title against former amateur teammate Marcel Braithwaite (9-1), with Light Heavyweight prospect and Love Island star Tommy Fury (2-0) making his long awaited return to the boxing ring after winning the hearts of the nation on the popular ITV reality television show over the summer.