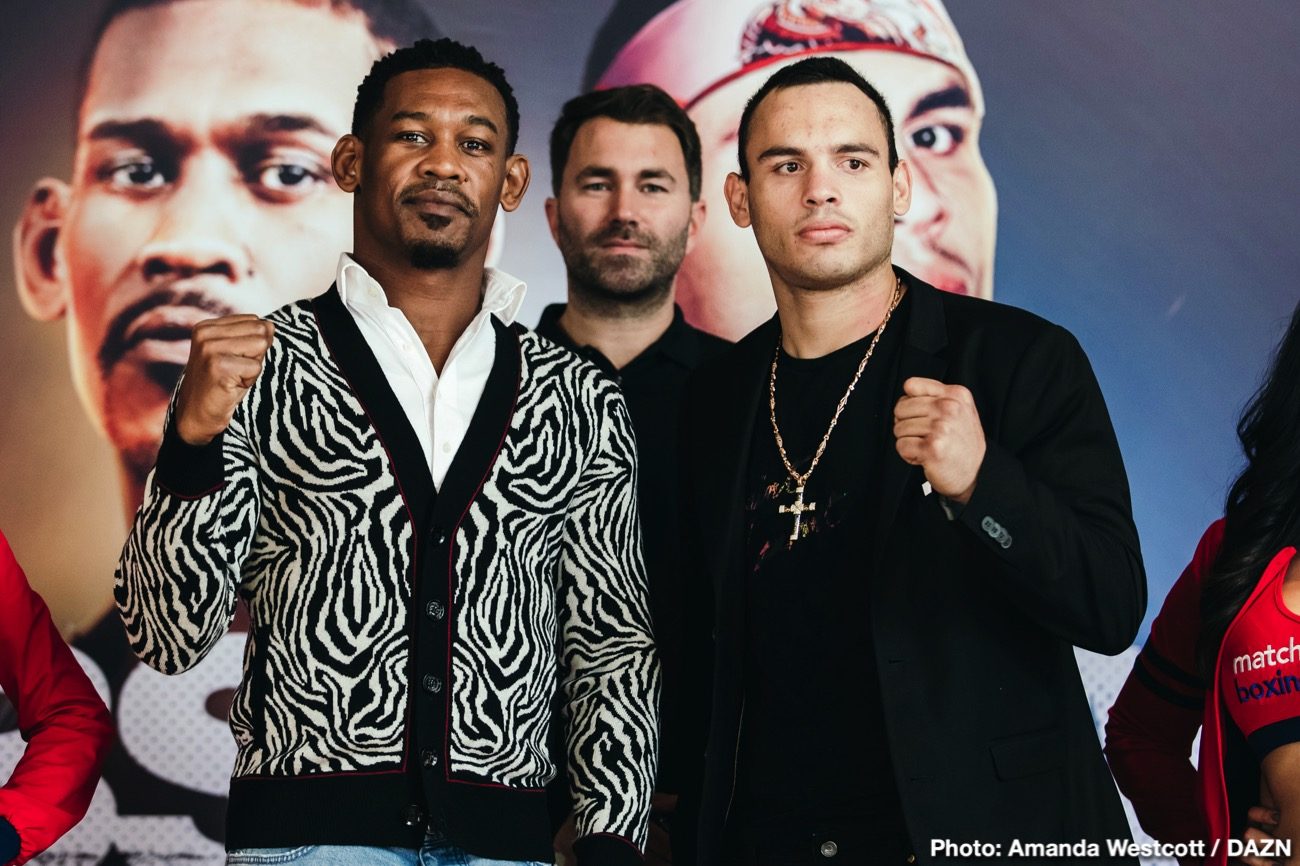 Daniel Jacobs enters a new chapter in his career tomorrow night and in the latest episode of ‘Born Fighter’ says his early sacrifices as a teenager led to him becoming a two-time World champion hunting two-weight glory, starting with his debut at 168lbs against Julio Cesar Chavez Jr at the Talking Stick Resort Arena in Phoenix, Arizona on Friday night, live on DAZN on US and Sky Sports in the UK.

Jacobs (35-3 29 KOs) closed the book on his time at Middleweight in May with a unification clash with Canelo Alvarez in Las Vegas, and the two-time World ruler now embarks on his quest to become a two-weight World champion.

The ‘Miracle Man’ faces Chavez Jr (51-3-1 33 KOs) with the Mexican star also hunting two-weight World honors, but a relaxed Jacobs told Lauren Gardner that he’s in a great place mentally for the fight as his career moves to a new stage after over 18 years in the game.

“Life is blissful,” said Jacobs. “I’m so fortunate to have made the early sacrifices in my life to be in this position now, to see my son thrive, be in an excellent school and be doing so well in school, that’s all I can ask for as a family man.

“Any time you have inner city kids that don’t have a lot, they look at sports or entertainment as an outlet. For me, boxing found me and I was able to take boxing as my outlet and be the best that I can be. But anyone that is from a place like Brooklyn can vouch for the mindset and mentality that if things aren’t given to you and you have to work for it, you say to yourself that you are going to go out there and get it or stay content with what I have.

“I was afraid of the streets, I was a Momma’s boy, I didn’t want to be in harms way. I had no teenage life, I have been dedicated to the gym since I was 14. I never partied or hung out with friends, nothing that a normal teenager did. I think that now I make up for that with my friends and family now.

“I look at the friends I grew up with or people that came from the same neighborhood who didn’t make those early sacrifices, and a lot of them aren’t where they wanted to be, they are on the streets or are dead. I made a conscious decision to stay away from that when I was very young and I am proof that if you make sacrifices early for a goal and keep that goal sacred, you can succeed and live forever like a king later in life.

“My spirits are high. When you are mentally in the best shape possible going into a fight it will definitely show and now that we don’t have any weight issues going into a fight like we did before, I think the fans are going see the Daniel Jacobs people saw in the amateurs and the early days as a pro.”

Jacobs is the latest fighter featured on season two of ‘Born Fighter’ following the likes of Devin Haney, Billy Joe Saunders and Michael Hunter as the second series focuses on the stable at Matchroom Boxing USA after 11 episodes from the British and Irish stable featuring Katie Taylor, Luke Campbell, Dillian Whyte, Joshua Buatsi and more.

Daniel Jacobs says he’s a happy fighter now he’s campaigning at Super-Middleweight as he makes his debut at 168lbs against Julio Cesar Chavez Jr at the Talking Stick Resort Arena in Phoenix, Arizona on Friday night, live on DAZN on US and Sky Sports in the UK.

Jacobs (35-3 29 KOs) closed the book on his time at Middleweight in May with a unification clash with Canelo Alvarez in Las Vegas, and the two-time World ruler now embarks on his quest to become a two-weight World champion.

The ‘Miracle Man’ begins that journey in Phoenix against Chavez Jr (51-3-1 33 KOs) the Mexican star that is also hunting two-weight World honors, but Jacobs has warned the 168lbs division that the extra weight moving up has made a huge difference to his mood in camp.

“It’s been amazing,” said Jacobs. “I’ve been able to be genuinely happy, to focus only on training and focus only on my skillset and not on the idea of cutting 10 to 15 pounds before the weigh in. So, it’s a big deal for me and I’m happy and I’m looking forward to showing everyone in the world that it wasn’t an excuse last time around.

“It was the actual fact of me cutting the weight and that would make a difference in the previous fights that I’ve been having. So now you’re going to see, in my opinion, a better version of myself and I look forward to that.

“I’m able to be a lot freer when it comes to putting more food and necessary foods in my body. I don’t have to limit myself and most importantly, I don’t have to go through that weight cut process that always drains me the 48 hours before the fight.

“I think with this last fight; it really took a toll on me. Obviously, we know the stipulations. I was in a contract with my last bout, so that was a clear indication for me that maybe I need to try and test the waters in 168 pounds just to give myself an opportunity to be myself, to be 100 per cent and camp has been beautiful.”

Chavez Jr and Jacobs clash on a huge night of action in Phoenix as Julio Cesar Martinez takes on Cristofer Rosales for the vacant WBC World Flyweight title.

The Welterweight division is in focus on the card as Maurice Hooker starts his quest to become a two-weight World champion as he moves up to Welterweight and takes on Uriel Perez on his bow at 147lbs. Josh Kelly is one of the stand out talents in the Welterweight division, and he meets Winston Campos as he closes in on a clash with European champion David Avanesyan at the start of 2020. Olympic gold medal man Daniyar Yeleussinov is another Welterweight star on the card and he looks to impress in his ninth pro outing against Alan Sanchez.

Gabriel Rosado will have a keen eye on the main event as he fights for the 38th time as a pro against Humberto Ochoa while Brit star Liam Smith continues his charge to a second World title reign in a ten round clash with Roberto Garcia.