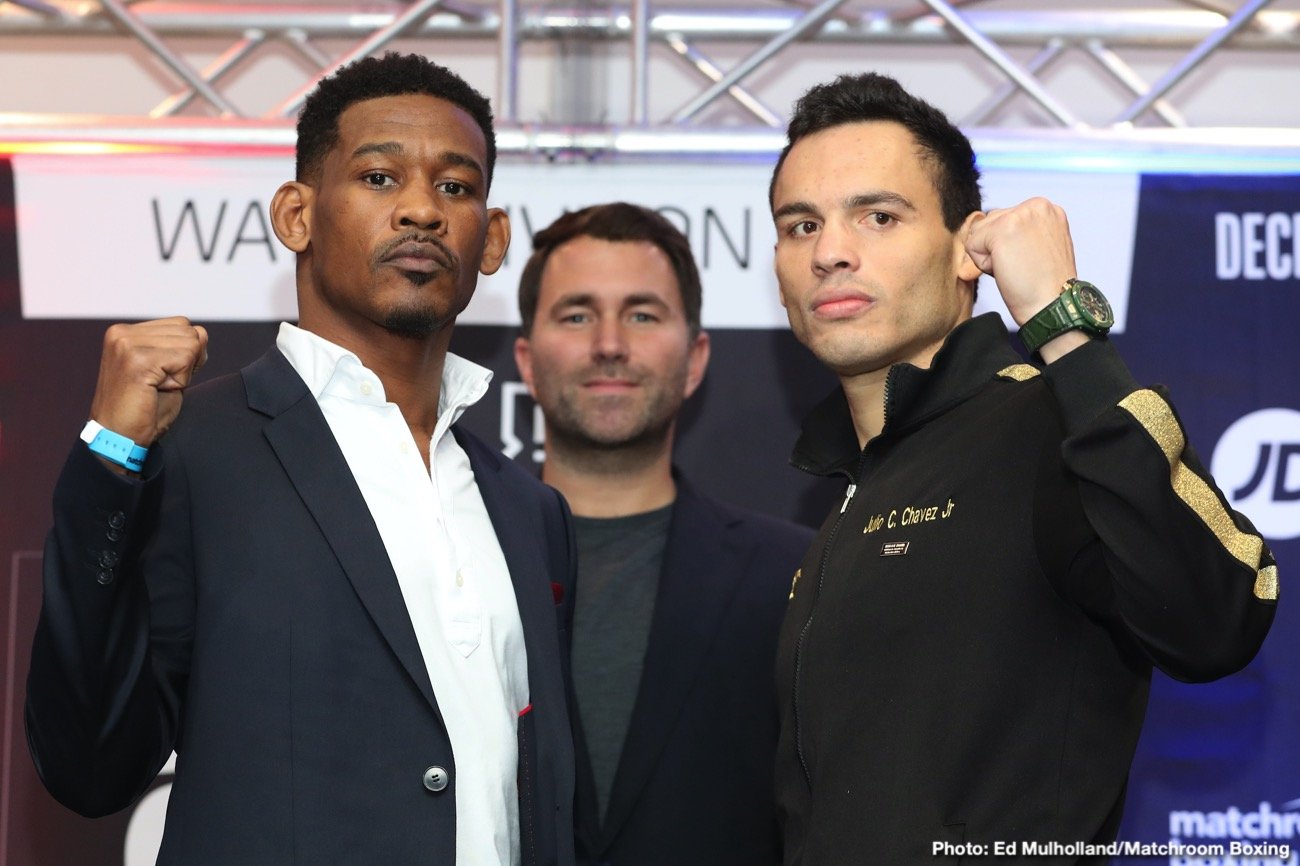 Roach believes that Chavez Jr. can pull off the upset in this fight over Jacobs, and he’s excited about it. He used to train Jacobs, so he knows his limitations, and he’s put together a great game plan for Chavez Jr. to exploit his flaws.

Jacobs will be trying to get back in the win column this Friday night on December 20 when he faces Chavez Jr. in a 12 round fight LIVE on DAZN. Danny lost his last fight against Canelo Alvarez by a 12 round unanimous decision last May at the T-Mobile Arena in Las Vegas, Nevada. Jacobs partially blames the defeat on his struggles with making weight, and then dealing with the secondary weigh-in on the morning of the fight.

Jacobs wants to challenge WBA super middleweight champion Callum Smith or WBO champion Billy Joe Saunders, and he needs a victory over Chavez Jr. to position himself for a title shot.

Chavez, 33, has obviously been brought in as the opponent for Jacobs to get a payday, and to get a feel for what it’s going to be like fighting in a new weight class at 168. Jacobs didn’t realize when the fight was signed how the boxing world would perceive the match-up. He now realizes how few fans see Chavez Jr. as having a chance in the fight, but obviously that wouldn’t have changed his mind about fighting him.

Jacobs , 32, is getting up there age, and who knows how many paydays he has left before the bottom drops out. Chavez Jr. a fight that Jacobs has a good chance of winning. It’s not a sure thing obviously, because if Chavez Jr. turns back the clock, he could win this fight. That’s what his trainer Roach is counting on.

Roach: This is a make or break fight for Chavez Jr.

“We’re close to the weight now, and it’s been a struggle, but it’s part of the game,” said Roach to IFL TV about Chavez Jr. “Who doesn’t struggle weight weight is nowadays. It sucks. This is a make or break fight for Chavez Jr., but he’s very capable of winning this fight, I feel. I know Jacobs really well. I used to train Jacobs for a while, and he’s got a new team also.

“New teams sometimes struggle,” said Roach. “The first fight with a new fighter is always a difficult one, and I think we have a good chance in this one. He’s going to come in big also,” said Roach about Jacobs. “He also looks pretty big right now. They’re both pretty big, and both the same size.

It won’t be the end of the world for Chavez Jr. if he loses the fight, but it could be bad if he gets knocked out or humiliated in losing a wide decision. What Chavez Jr. can’t afford is to lose the way he did against Canelo Alvarez in 2017. Chavez Jr. was supposed to go to war with Canelo, but instead he failed to throw punches.

Jacobs: This is my coming out party against Chavez Jr.

“The super middleweight division is treating me good,” said Jacobs to IFL TV. “I think you’re going to see a better version of me. I’ll be more mentally focused, and hydrated, and I’m not going to have any excuses. You’re going to see more punches, and more activity from me. I know a lot of fans have been disappointed in my last couple of fights. I feel like this is my coming out party.

“I’m looking forward to transferring over, and having a great performance,” said Jacobs. “Chavez Jr. has the size. He may not have the skillset. We’re not sure which Chavez will show up. I’m preparing for the best Chavez yet, and I’m prepared to give my very best. This will be a good test to measure myself against the best,” Jacobs said.

If Chavez Jr. looks bad on Friday, Jacobs wont receive credit from boxing fans. He’ll need to go a step further and beat someone like Callum, Caleb Plant, Saunders or David Benavidez. It would be nice to see Jacobs fight a guy like Dmitry Bivol. Now that would be a coming out party, but Danny would likely never agree to fight Bivol.

Danny Jacobs rates himself as best skilled fighter at 168

“Skill for skill, I definitely think I’m the best in the super middleweight division,” said Jacobs. “I realize in the last couple of months in the promotion of this fight that people don’t consider him [Chavez Jr.] to be one of the best or even close. So I think I need to make a statement. I go in there with the mindset to win, but also to look impressive. It motivates me,” said Jacobs about him wanting to go after a second division world title. “Not only am I in a new weight class, but I’m in with some heavy hitters,” said Jacobs.

Daniel might be the best skilled fighter at 168, but that won’t matter if he can’t take the power from the big hitters. Guys like Callum Smith, David Benavidez and even Chavez Jr. have the kind of power that negates boxing ability.