‘If Joshua gets STOPPED, it’s over for him’ – Carl Froch

By Tim Royner:  Carl Froch says Anthony Joshua’s career could be over with on Saturday if he suffers another bad loss to Andy Ruiz Jr., like the one that took place last June. Joshua was mentally and physically CRUSHED by the American Ruiz last June. In the 7th, Joshua gave up the ship after being knocked down twice.

Although the referee Michael Griffin says Joshua didn’t quit, his decision not come off the ropes to resume fighting tells a different story.

Froch thinks Joshua (22-1, 21 KOs) can come back from a decision defeat, but probably not another bad beat down like last time against Ruiz (33-1, 22 KOs). Carl says he can’t predict a winner, but he’s leaning in the direction of Ruiz.

Joshua will be trying to regain his IBF/WBA/WBO heavyweight titles from Ruiz in a rematch this Saturday night in Diriyah Arena, Diriyah, in Saudi Arabia.

Froch (32-2, 24 KOs) retired while still in the prime of his career in 2014 following a victory over George Groves in their rematch. Some boxing fans believe that Froch was afraid of facing Gennadiy Golovkin. Froch walked away from a big payday by not continuing his career to face GGG or battle Andre Ward in a rematch.

Depending on how Joshua loses to Ruiz, his career could end – Froch

“I can’t wait for the fight, and I’m sure there’s a lot of people on the fence about who’s going to win,” said Froch to IFL TV about the Joshua vs Ruiz 2 rematch. “There’s people talking about this being the end of AJ, because if he loses this fight, depending on how he loses, it could be the end of him. That’s the big talking point.

“Where is he going from here if he doesn’t pull it off? The pressure is on Joshua to try and get an amazing performance, and try and get a stoppage to right that WRONG that happened in the Garden in New York. If he loses on points in a close fight, and picks himself up and gets back on track and carries on.

“If he gets beat up, knocked down and stopped, and forced into a position where the referee sees fit to stop it like last time. People say he quit, and he retired on his feet. Whatever that happened, he got knocked down, and then he got beaten up, out-boxed and hurt and stopped,” said Froch in talking about Joshua’s career being finished if he loses.

Joshua’s promoter Eddie Hearn of Matchroom Boxing is adamant about AJ’s career being able to continue on if he loses the rematch with Ruiz, but you never know. Boxing fans will know how to beat Joshua if he gets blown out again, and it’ll make it doubly tough to come back. Deontay Wilder and Tyson Fury will make sure that they follow the blueprint Ruiz created in order to beat Joshua.

Another bad loss to Ruiz = Curtain’s for Joshua’s career

“It was a bad loss. There’s a lot of things that happened in that first fight,” Froch said in remembering Joshua’s loss to Ruiz last June. “If anything like that happens again, it’s almost like curtains in your career. I don’t see how you can come back from that.

“It’s something like [Deontay] Wilder going to give him a chance or someone like Tyson Fury. He ain’t going to want to say, ‘I’ll give you shot.’ I don’t think they will. It’ll be the rebuilding process then, and he’s never been the opponent, has he? He needs to win, and he needs to win in style,” said Froch in saying Joshua needs to beat Ruiz in style.

Froch is underestimating Hearn’s ability to match him against the right guys to get him back winning again. Hearn matched Joshua carefully for the first six years of his career without any problems. He could turn things around for AJ easily by putting him in winnable fights only.

WBC heavyweight champion Deontay Wilder and Tyson Fury will have no issues with agreeing to fight Joshua, as long as he doesn’t ask for the bigger cut of the purse.

“You know what? I’m on the fence,” said Froch discussing his inability to predict a winner in the Joshua vs. Ruiz Jr. rematch. “I told Sky; they’re always trying to force me for a prediction on the fight build up. I’ve gone from saying, ‘AJ is the slight favorite,’ to saying, ‘I don’t even know now which way this fight is going to go.’

“If someone was going to push me off the cliff if I guessed wrong, I’d probably guess Ruiz. That’s how I’m feeling at the moment, because he looks so charged when he’s on the pads. He looks so strong, and he’s still big. I thought he was going to lose weight, and that would be a problem for him. He still looks heavy and powerful. I haven’t seen a lot from AJ.

“I’ve not seen him in sparring or in camp, and I haven’t chatted with him. But what I have seen from him in ‘The Gloves are Off’ on the Build up that Sky put on pay-per-view, I’ve not seen anything that convinces me that he’s a man on a mission or a man on fire…I’ve not seen that from AJ, and I think that’s what he needs,” said Froch.

The smart pick is to go with Ruiz, because he proved already that he’s the better fighter of the two. If it had been a close loss for Joshua, then it would make sense to pick him to win.

It’s going to be difficult for Joshua to win this fight unless he’s able to handle the pace that Ruiz sets, because he’s going to push him the whole time.

Froch worries Joshua could lack the strength to hold Ruiz off

“I had a brief discussion with his coach Rob McCracken three weeks ago, who is confident he’s in a good place,” said Froch in getting the word from McCracken about Joshua being ready. “It’s literally a 50-50 fight. I’m on the fence right now, and I can’t [predict an outcome]. I need to see him at the weigh-in, and see how he’s shaping up and what they’re saying at the weigh-in when they’re interviewed.

“I need to look in his eyes, but this is a massive task for AJ. The pressure is immensely on him. It’ll be for speed, won’t it?” said Froch when asked how Joshua’s slimmed down physique well help him in the rematch. “It’ll be for speed. It depends on what he weighs in, and how light he comes. I still want to see him around or above 17 stones. If he drops below 17 stones, I’d be worried if he’d have the weight and the strength to keep Ruiz off. 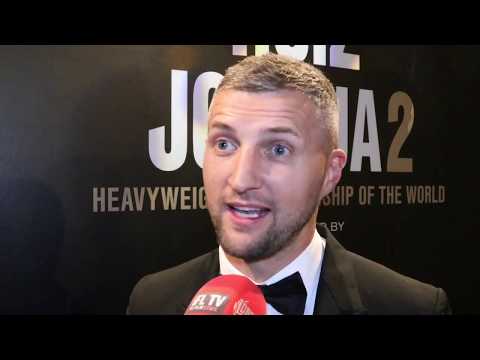 “If Ruiz backs him up, pushes on him, leans on him, and maneuvers him around the ring, he’s in control like he was in the first fight. I’d like to see AJ big enough and strong, strong enough and heavy enough to hold off Ruiz, and meet him when he comes with the punches. Lean on him, grab him, and tie him up, and sort of bully him out of it,” said Froch.

Joshua weighed in at 237 lbs during Friday’s weigh-in, and he’ll be considered lighter than Ruiz. The last time they fought, Joshua weighed 247 lbs, and was too bulky to fight hard without gassing.