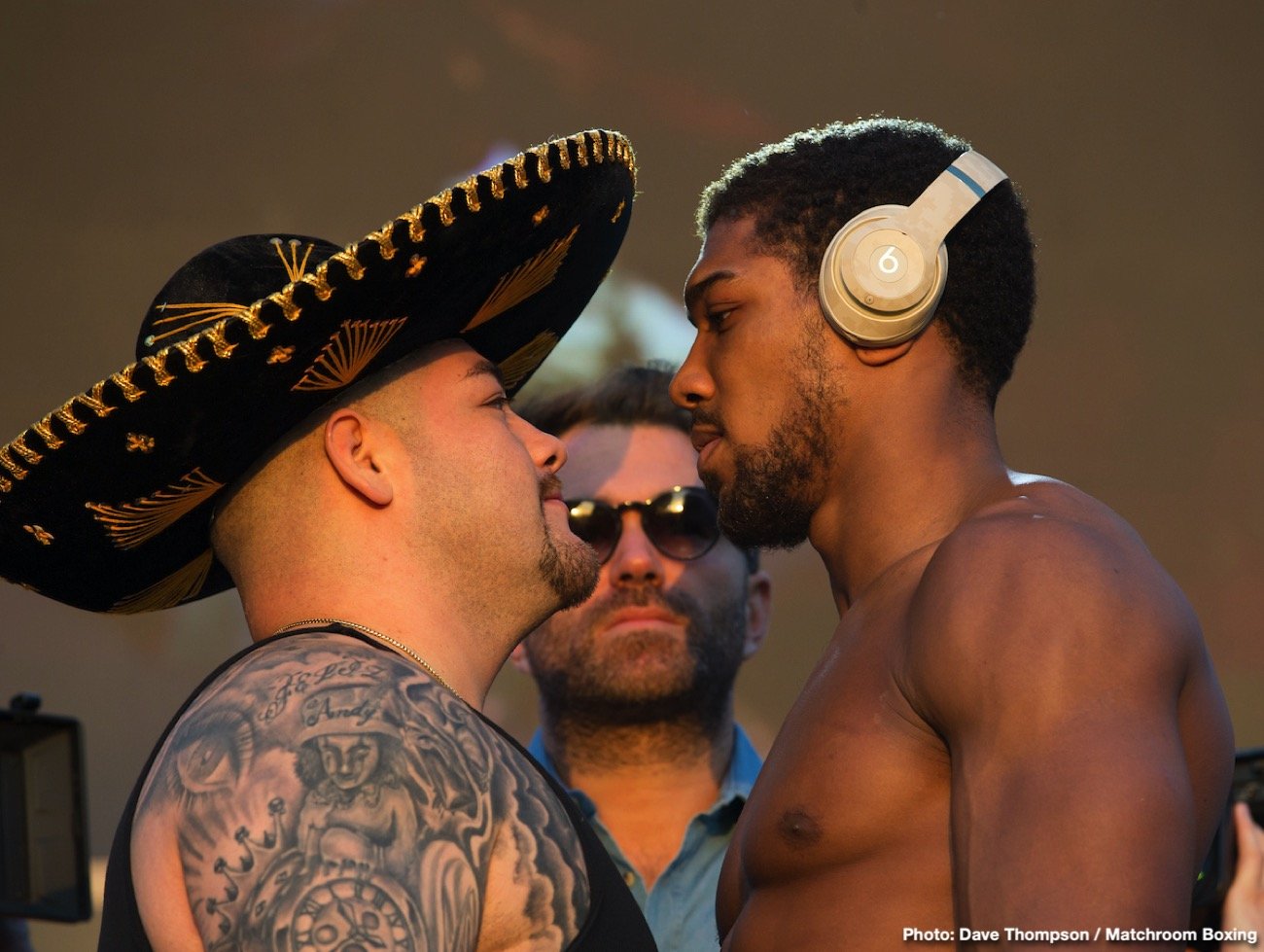 The biggest fight of the year is now just over 24 hours away – Ahead of tomorrow’s much-anticipated rematch between Andy Ruiz, Jr. and Anthony Joshua OBE, both fighters tipped the scales in front of a raucous crowd in Saudi Arabia. At 283.7 pounds, Ruiz came in at his heaviest weight in many years and 15 pounds heavier than he was for the first fight in June. Meanwhile, Joshua came in at 237.8 pounds, which is 10 pounds lighter than he was in June and the lightest he has been for any fight since 2014.

Ruiz vs Joshua 2 will be streamed exclusively on DAZN in the United States, in addition to being available globally on DAZN in Austria, Brazil, Canada, Germany, Italy, Japan, Spain and Switzerland. The full main card will begin on DAZN at 12 p.m. ET with the main event is expected to commence shortly after 3:30 p.m. ET. 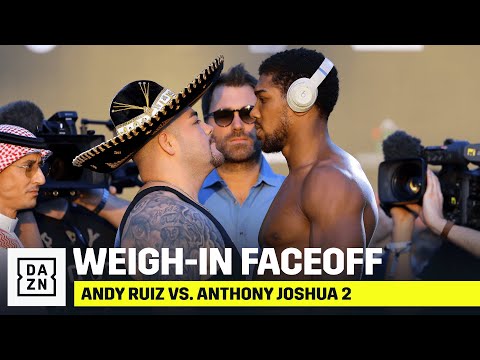 Fans in the United States can sign up for a full year of DAZN for the low price of $99.99 to catch Ruiz vs. Joshua 2 and a highly-anticipated 2020 boxing schedule, or $20 for an action-packed December which also includes Daniel Jacobs vs. Julio Cesar Chavez, Jr. on Dec. 20. 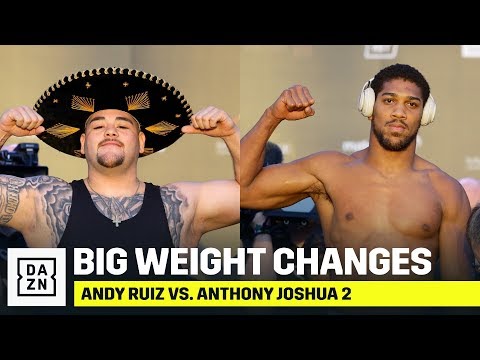 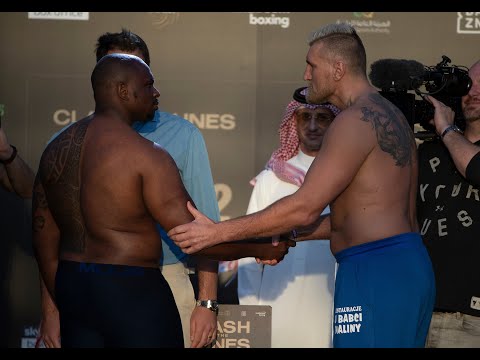 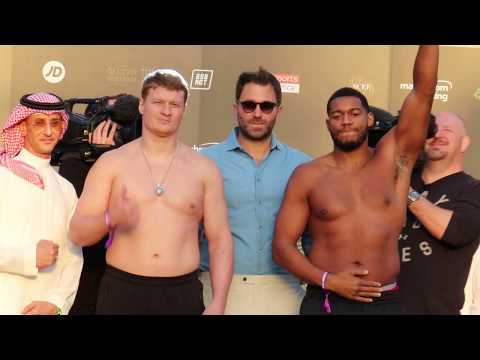 Andy Ruiz Jr and Anthony Joshua faced the world’s media for the first time this week at the official fighter’s arrival party at the Centria Mall in Riyadh ahead of their colossal Heavyweight World title rematch at the Diriyah Arena in Saudi Arabia on Saturday December 7, shown live on Sky Sports Box Office in the UK and DAZN in the US.

Ruiz told BBC Sport: “I have been enjoying life. This is just the beginning.

“I sure haven’t stopped smiling. I have been so happy how my life has changed for my wife, my kids, my whole family. And I am blessed with all that came my way.

“All of the pressure is on him, not on me as I followed my dream and made it come true.”

Speaking to BBC Sport Joshua said: “There are things I have had to do to take me to the next level. I am confident I can be victorious and when I am I will tell everyone of how I went wrong. 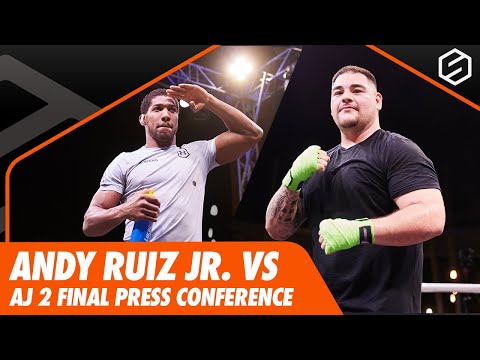 Where Joshua went wrong is a couple of areas. His stamina has never been good even when he was in the amateurs. But after turning professional n 2013, Joshua made things worse by packing on a lot of unccessary muscle. He felt the muscles would help him, but they haven’t. Joshua’s punch resistance is the other thing that hurt him in the Ruiz fight. Anthony doesn’t take a good punch, and this is a problem that dates back to his amateur days when he was getting stopped occasionally.  Ruiz took advantage of Joshua’s chin issue by hurting him in the 3rd, and finshing him in the 7th.

“And I do feel different. I feel confident, I believe. I have been boxing since 2008. It’s almost like it’s been given to me. Now I am back to the days of being younger, striving. 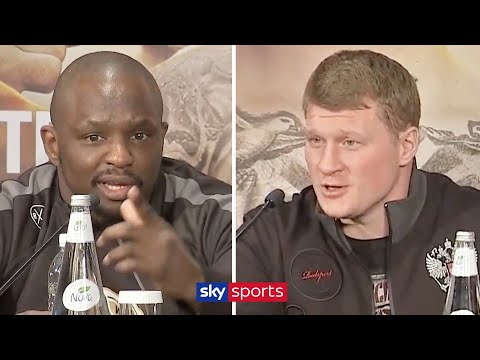 “I am a challenger. This is my chance at the Heavyweight Championship of the World. The event starts when I am victorious. Then I will tell you about my story, what I have come through, the obstacles.”

Ruiz vs. Joshua 2 tops a huge night of boxing in Saudi Arabia.

Is Joshua ready for the Ruiz rematch?

Joshua has been acting stressed out throughut the training camp for the rematch with Andy. Although this is a fight that the 29-year-old AJ insisted on taking, you have to wonder whether he would have been better off letting his head clear by taking the rematch in a year or two.

Right now, it seems like Joshua isn’t mentally ready to fight an immedite rematch with Ruiz. We’ll have to see if the stress hinders Joshua’s performance on Saturday night when he faces Ruiz in Saudi Arabia. 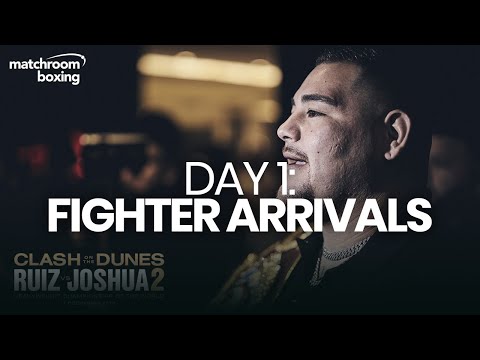 ‘If Joshua gets STOPPED, it’s over for him’ – Carl Froch »