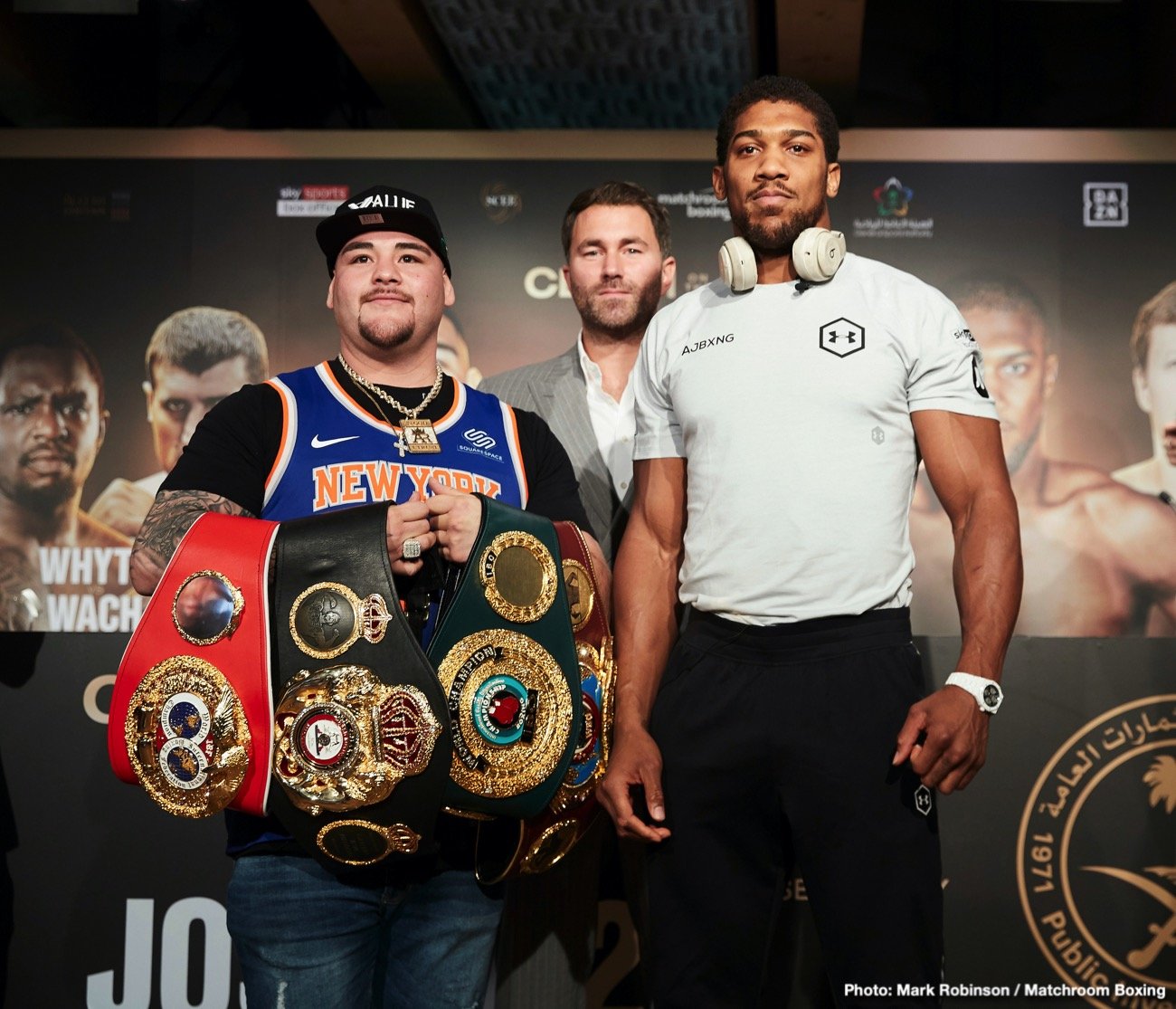 By Gary Todd – With only days to go until Anthony Joshua [ 23 21 kos 1 loss by tko]   and Andy Ruiz [ 32 22kos 1 loss on points ] step through the ropes of the purpose built, Diriyah Arena on the outskirts of the desert capital of Saudi Arabia,  these two fighters will have done everything possible to get ready for arguably the biggest heavyweight fight of the decade. This is not just a fight, it’s a huge fight on a massive worldwide event that will be telecast to over 60 countries, and it will be watched by millions of people across the globe.

It’s billed as ‘Clash on the Dunes’ but the billing doesn’t quite do this fight justice.  A lot of words has been spoken and written on the lead up to this rematch, and for good reason. words like, passion, heart and  soul, soul searching, reset, tactics, going back to basics, focus on boxing more, and finally, how could this have happened?

Former heavyweight greats , Mike Tyson, and Lennox Lewis have been mentioned a lot , and how they took an opponent lightly and paid the price for it on fight night. Rahman, McCall, and Buster Douglas were used as a comparison to the fight, but really, when you think about it, these defeats to Lewis and Tyson were due to not preparing 100% in camp. Joshua trains 3 times a day, and he is a well serviced, well oiled machine of a man. Did he train for the Ruiz fight ? 100%.  Was he unsettled in camp? yes. Joshua had been training to fight the 6’4 [ 23 20 kos 1 draw]  284 pound, Jarrell Miller, and with weeks to go, he had to adapt to a totally different beast in Ruiz Jnr.  Did he take Ruiz lightly? yes.

There was questions raised on Joshua’s state of mind leading up to the fight and even more questions on his lack of experience and if he was in fact learning his trade as he was going , albeit at the highest level. In short, he took a beating in the ring that night on June the 1st, and he was battered even more by the media in the months after . Putting all the questions aside, Ruiz fought a great tactical fight , using all his 20+ years experience as a boxer, fighting  all over the world. He out fought a powerful puncher, he showed more heart and will to win on the night, and he caught Joshua with a punch that he never recovered from. That’s heavyweight boxing.

Here’s a few items of note about Andy Ruiz

A few items of note about Anthony Joshua

The big question is, can Joshua come back 6 months later and make the necessary adjustments in his [ teams]  training camp and come back mentally focussed and strong? Will Ruiz be as hungry to win ?

For Joshua to win he has to use his jab, take control from the first bell, and throw the basic 1-2 left jab, straight right, and throw in the left hook anytime he can. I feel Ruiz is perfect and well open for an uppercut as he crouches over trying to get in.  Joshua  cannot let the shorter man, get even shorter and get inside . Easier said than done but that’s the only way he will win this fight and win back the belts.  Ruiz is experienced and knows how to cut the ring off, making his opponents back up. Once he gets them backing up, he gets inside and bangs away with his fast combinations.  Joshua also carries his left hand too low which has been very visible through his career.  Ruiz is susceptible to the left hook.

My view is Ruiz can only fight one way, and with all the talk from AJ saying he has gone back to basics, and has “boxed more” in camp, can he really fight much different or add anything more. ?He is obviously going for less heavy muscle to try and fix his stamina issue which was very evident in the first fight. The gameplay is be quicker on his feet, use the jab, control and move away, to box Ruiz . If that is the plan, I’m sure Ruiz will have a say in all that. Ruiz will do what he does, target the head and body, and try to test Joshua’s heart and chin. Will Joshua get flash backs when he gets a head shot?

I’ve said it before, but i think Ruiz made a mistake agreeing to fight in Saudi. He is the champion, and he has the power of the belts. It was obviously a money talks situation and he must be very confident in stopping Joshua again.  One thing is for sure, he will need the knockout.

Andy Ruiz Jnr by TKO in 10th round.

Gary Todd has been involved in all aspects in the sport of boxing for over 25 years. He is the proud author of his books on boxing’s world champions, “Workout’s from boxing’s greatest champs” vol.1 and 2.