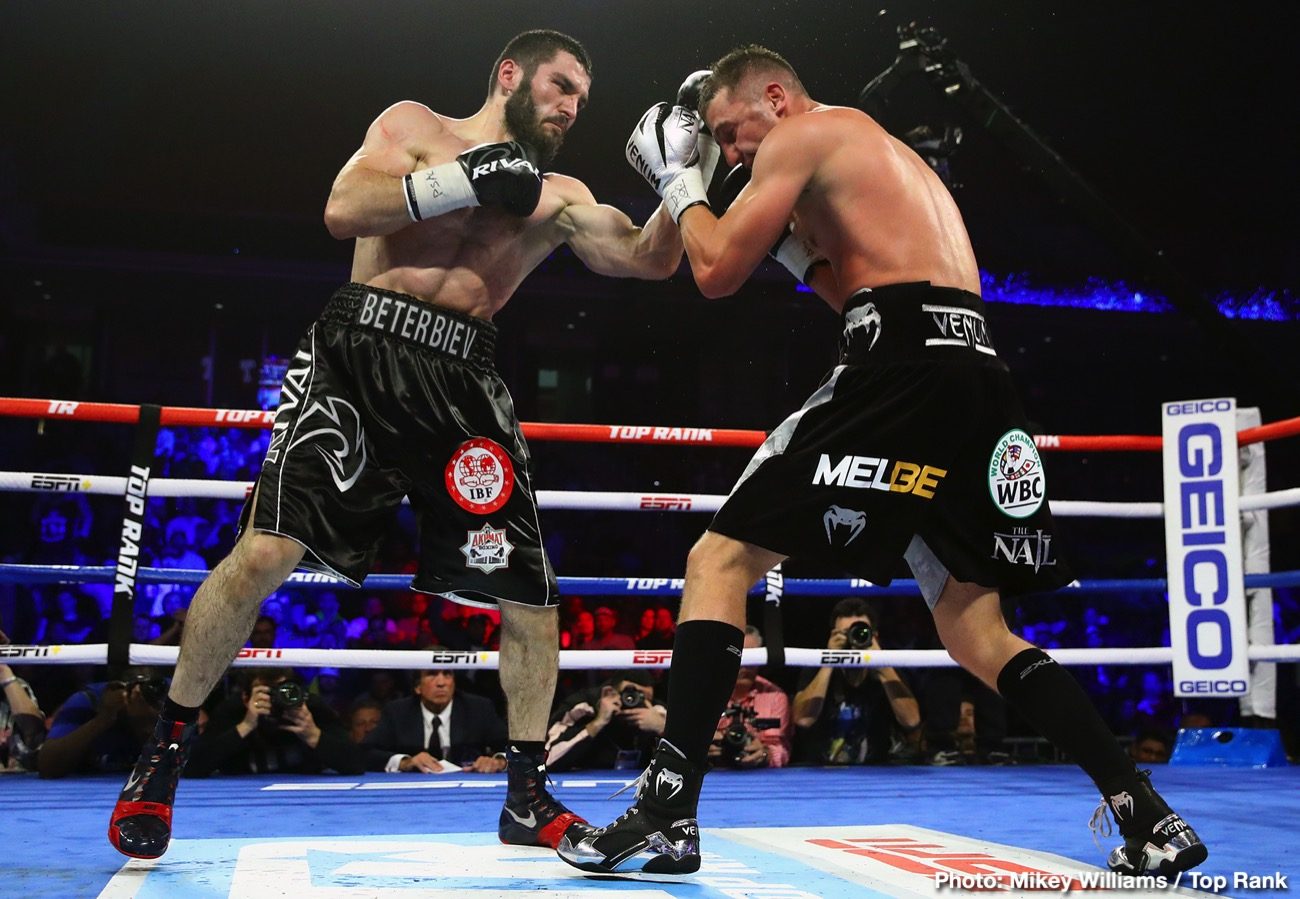 Earlier on Monday, a Chinese agency won the purse bid to stage the fight, according to @MikeCoppinger. They out-bid Top Rank Boxing, the promoters for the unbeaten Beterbiev (15-0, 15 KOs), with a winning bid of $1.9 million. Top Rank bid $1.35 million.

Beterbiev to go on the road again

It’s not that much of a surprise that Top Rank was out-bid by a Chinese agency for the Beterbiev vs. Meng fight, because Bob Arum said last October that he wants to stage the fight in China.

Arum doesn’t seem to mind that the two-time Russian Olympian Beterbiev will be on the road in giving Fanlong the home country advantage. Beterbiev’s motto, ‘I don’t need judges,’ as he’s knocked out all 15 opponents he’s faced since turning professional in 2013.

Beterbiev looked impressive in beating WBC light heavyweight champion Oleksandr Gvozdyk by a 10th round knockout on October 18 in Philadelphia.  Going into that fight, a lot of boxing fans were picking Gvozdyk to win. You can argue that they were’t familiar with Beterbiev at the time, but he opened their eyes by wearing down Gvozdyk.

“We’re hoping to do that fight in China,” said Arum to Fighthype. “We have a big offer to go to an Island off China, which they call the Chinese Hawaii.

“It’s supposed to have beautiful weather all year round, and it has 12 golf courses,” said Arum. “After that, Eddie Hearn said he would make [WBA light heavyweight champion Dmitry] Bivol available to fight the winner of this fight [Beterbiev vs. Fanlong] on ESPN. So we’ll take him up on that.

Source: A Chinese agency, at $1.9 million, won the purse bid for the IBF light heavyweight title fight between Artur Beterbiev and China’s Meng Fanlong. The bout will likely be staged in China in the spring. Top Rank, which holds a long-term deal with Beterbiev, bid $1.35 million

A unification fight between Beterbiev and WBA light heavyweight champion Dmitry Bivol (17-0, 11 KOs) would be interesting to fans. This matches two of the best at 175, and it’s sure to have a lot of fireworks.

Sadly, Arum was hoping that the winner of the Canelo Alvarez vs. Sergey Kovalev fight would be interested in facing Beterbiev, but his hopes were foiled with the Mexican star vacated the WBO belt after winning.

Apparently, Canelo didn’t fancy the idea of facing Beterbiev in a unification, and you can’t blame him. Beterbiev isn’t a shot fighter, and he wouldn’t throw weak punches at him like Kovalev did. It would have been nice to see Canelo fight Beterbiev, because it would be a situation where he would be fighting the best. Canelo didn’t fight the best in winning his world titles at 168 and 175 in beating Rocky Fielding and Kovalev.

The 31-year-old Meng represented China in the 2012 Olympics, but was eliminated in his second fight to Yamaguchi Falcao. Since turning professional, Fanlong has wins over the likes of Daniel Judah, Frank Buglioni and Adam Deines. He’s a flat-footed fighter with decent power, and average hand speed.

This is going to be a big step up in competition for Meng to face Beterbiev, because he’s far better than the guys he’s been facing thus far.