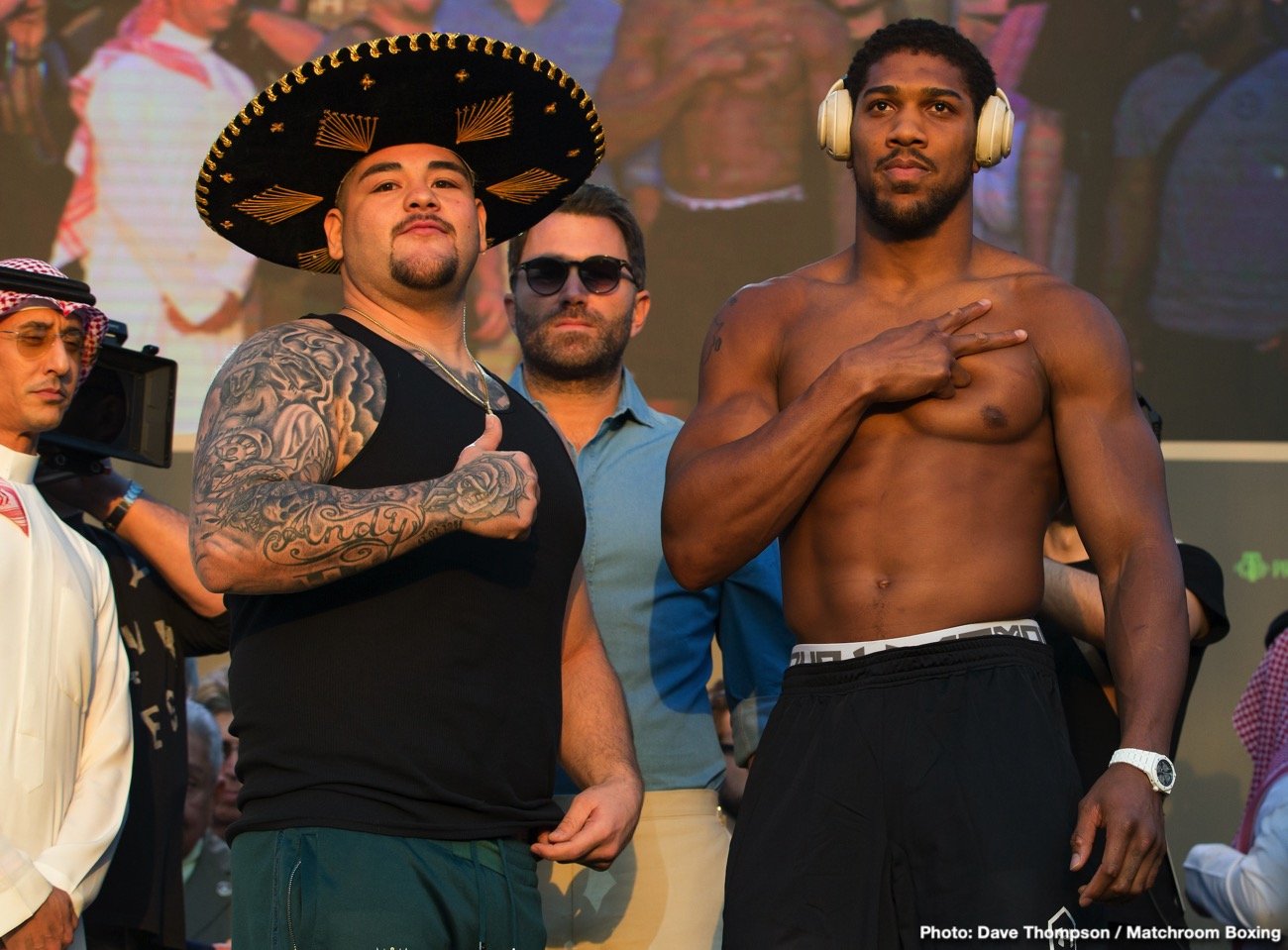 By Barry Holbrook: IBF/WBA/WBO heavyweight champion Andy Ruiz Jr. weighed in at a whopping 283.7 lbs for Friday’s weigh-in for Saturday’s rematch with former unified champion Anthony Joshua Diriyah Arena, in Diriyah, Saudi Arabia. Although Ruiz weighed in while wearing jogging trousers and a tank top, he clearly is considerably heavier than the 268 lbs he weighed for his previous match against Joshua.

This is a risky move on Ruiz’s part in coming so heavy, considering that Joshua weighed in a lean 237 lbs. That’s 10 lbs lighter than Joshua weighed in his previous fight against Ruiz Jr. last June in New York City. For that fight, Joshua weighed 247 lbs, and gassed out after just 3 rounds.

Ruiz’s weight represents the heaviest he’s weighed since 2009, and that’s not a good sign. He started training camp looking VERY heavy, and he hasn’t done much to trim off the excess pounds that he’d gained while celebrating his win over Joshua last summer. Whether it was design for Ruiz to come in this heavy or not, it was a wrong-headed idea that could pay for.

“20 stone 3, I got a lot of respect for Ruiz, because when I ate a lot, I don’t want to take my top off either,” said Matchroom Boxing promoter Eddie Hearn to IFL TV. “But as I said in the build up, I don’t think it matters about Ruiz’s weight anyway. What is he? 10 lbs heavier? AJ is 10 lbs lighter.

“He is fired up like a stallion, ready to go for this fight. The weight, how they look on the scales really doesn’t matter all that much. This is a 50-50 fight, and I believe AJ will knock him out tomorrow night inside eight rounds. Not really,” said Hearn when asked if Joshua’s punch resistance will be less due to him coming in lighter.

“He’s probably 3 lbs lighter than when he boxed [Wladimir] Klitschko. His punch resistance wasn’t too bad on that night, was it? He got off the deck, and he got smashed to pieces in the 5th round with every shot in the book, and he kept on coming,” said Hearn in fondly remembering Joshua’s 11th round knockout win over Wladimir in April 2017.

Joshua looks like he training camp seriously in trimming off the excess muscle that he’d been carrying, and should be faster. Hearn certainly believes Joshua will now that he’s seen both guys weigh-in, and it’s hard to disagree with him. Ruiz should be scolded for letting himself come in so heavy for this fight.

The last time Ruiz was heavier than this was in June 2009 for his fight against Ross Brantley. Ruiz weighed 292 lbs for that fight, and he stopped Brantly in the 1st round. For Ruiz’s pro debut in March 2009, he weighed 297 lbs in knocking out Miguel Salvador Ramirez in round 1.

Joshua vs. Ruiz 2 sold out – Hearn

“I am so pumped for this fight. I’m nervous and excited,” said Hearn about Joshua-Ruiz 2.  “Imagine tomorrow night. This is massive, and I want him to win so bad. Over 4000,” said Hearn when asked how many British fans will be attending the fight. “It’s sold out. I think there are 200 or 300 left on the website. This is one of the biggest iconic moments in the entire sport of boxing. This is a moment in history. I hope he gets his job done,” said Hearn.

15,000 boxing fans will be at ringside on Saturday night for the Joshua-Ruiz Jr. rematch, and should be very loud. These are two guys that will be bringing their best, and it won’t be a tactical match. It’ll be interesting to see how this fight plays out.

Is Andy Ruiz the next Buster Douglas?

Ruiz coming in so heavy makes one wonder whether he’ll suffer the same fate as James ‘Buster’ Douglas. In February 1990, huge underdog Douglas shocked the boxing world in stopping IBF/WBA/WBC heavyweight champion Mike Tyson in the 10th round in Tokyo, Japan.

Eight months later, an out of shape looking Douglas was stopped in the 3rd round by Evander Holyfield in October 1990. Douglas’ career was never the same after that loss. Even as flabby as Douglas for that fight, he wasn’t as bad as Ruiz looked today. Ruiz looks like he’s been living off of Snickers bars for the last six months. 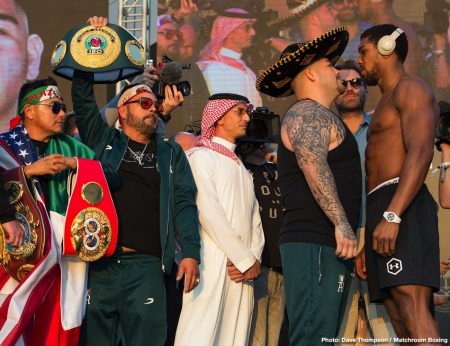 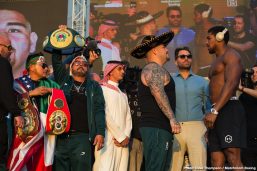 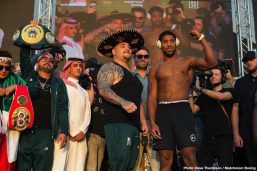 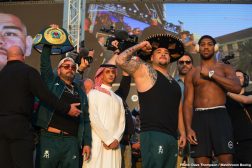 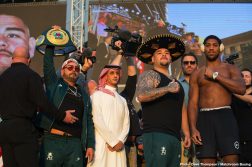 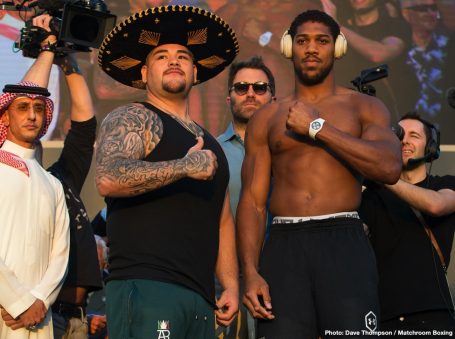 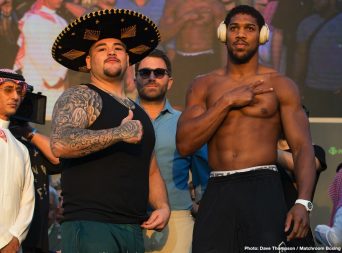 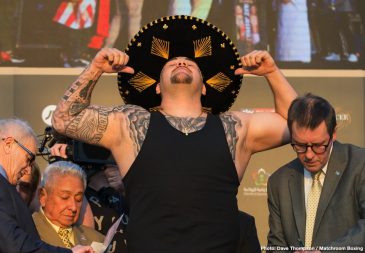 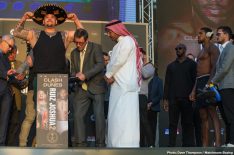 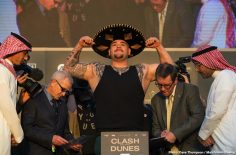 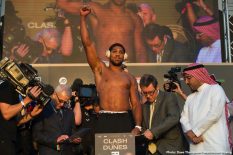 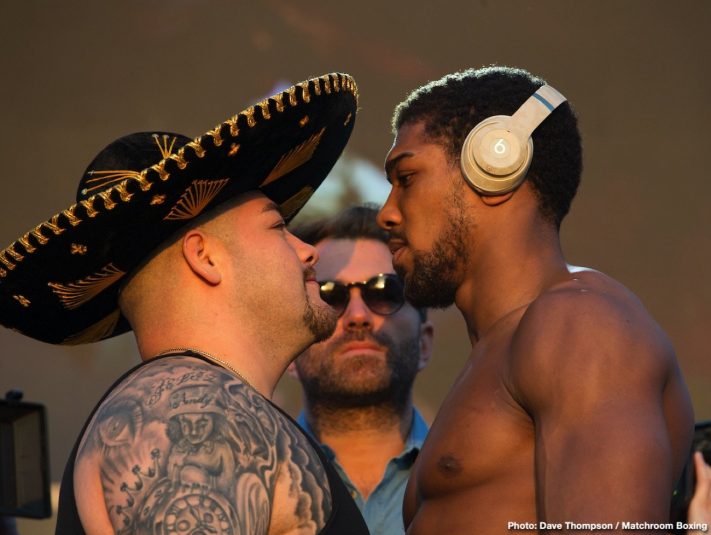