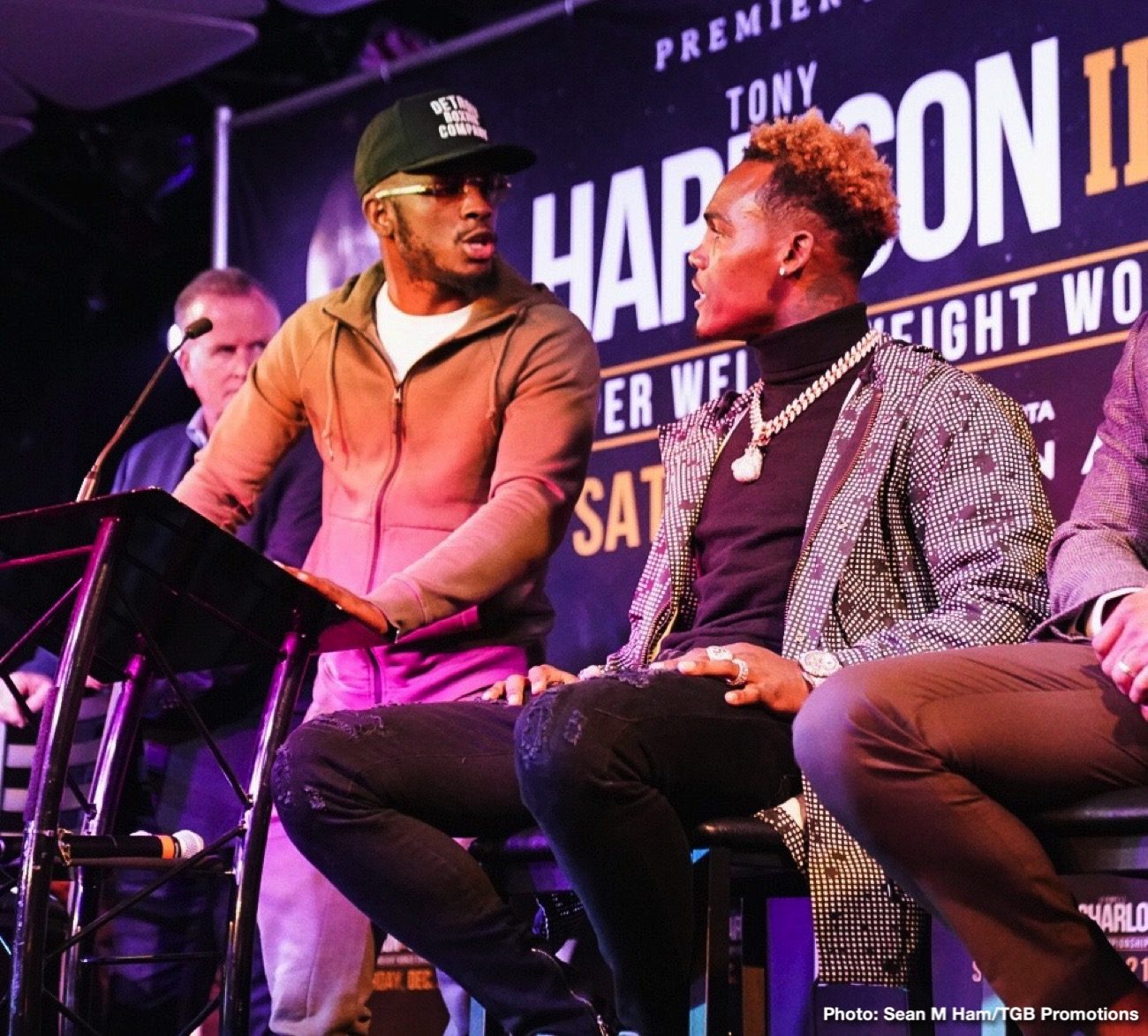 By Allan Fox: After beating Jermell Charlo last December in taking his WBC junior middleweight title, Tony Harrison says he’s playing around inside his conscienceand tormenting him. The two fighters are facing each other in a rematch on December 21 on FOX PBC at the Toyota Center in Ontario, California.

Harrison (28-, 21 KOs) had Jermell all worked up and seemingly on the verge of coming unglued mentally during their news conference on Thursday in Los Angeles, California. It didn’t take much for Harrison, 29, to set Charlo into a mad frenzy.

All Harrison did was remind Charlo that he beat him last December, and that he’s going to do it again in their rematch. Of course, Harrison also threw in a few insults in calling Charlo a female. At one point it looked like the two fighters were going to start trading shots, but it never came to that, luckily.

“He fights with emotions on his sleeves. He’s emotional. You can always tell when you’re getting into his head, he starts getting emotional. It’s kind of like you fight with too much emotion. You’ll never beat me like that. He’s just an emotional guy,” said Harrison about Charlo being mentally fragile.

The reason Charlo lost to Harrison last December was because he never made any adjustments. Jermell came out looking to knockout Harrison from the opening bell, and he never switched to a Plan-B when it became clear he wasn’t going to do it.

Harrison willing to give Charlo pointers

“If he needs pointers, tell him to come sit down with me,” said Harrison. “It might cost him something. He can sit down with me, and I’ll put him in the right direction. Real men don’t make excuses. I’m not going to make excuses. The judges are here to do their job. They got two eyes just like everybody else.

Charlo still thinks he should have been given the decision in their first fight. The judges scored it for Harrison by the scores 115-113, 115-113 and 116-112. It was easy to see what the judges saw with their scoring. Charlo was swinging wildly trying to KO Harrison, and missing badly and getting countered. Jermell can’t do that in the rematch if he wants to get the win.

“I’m not going to make excuses. The fight is going to play out the way the fight is going to play out,” said Harrison. “One thing is for sure, this is facts. He had 12 rounds to make the decision for whatever he wanted it to be, a knockout or whatever. And he had 12 rounds to do it. He never made an adjustment, and he never did nothing different. It was panic and chaos in his corner every time I looked in his corner, they were yelling.

There was definitely chaos going on in the corner of Jermell last time they fought each other. Charlo’s corner was telling him to use his jab, and box smart, but he was doing the opposite. It looked like Charlo thought he could continue his knockout streak or something.

Earlier in Charlo’s career, he was a finesse fighter without much power. But four years ago, Charlo started to knockout most of his opponents. He wasn’t facing highly talented opposition through, which might explain all the knockouts. But nevertheless, going into the Harrison fight, Charlo had knocked out 4 out of his last 5 opponents. 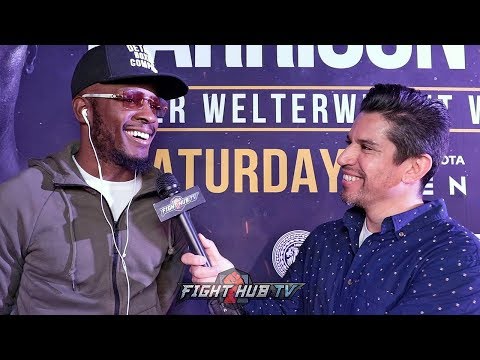 “This sport of boxing everybody is starting to get away from what the sport actually is. You’ve got to have talent, man. You can’t walk out there and think you’re Arnold Schwartzenegger, and think that the way to win fights is to walk forward and be a tough guy. No. If you want to fight me MMA, we can do that too, and then you’ll see a different fighter in me, because that’s not the sport.

“If you want to go all out and do that, then we can do that, and I’ll beat you in that. But when it comes to the sport, and the high demand and what my people taught me of hit, and not get hit and that kind of game? It’s chess and not checkers. He’s going to continue to play checkers, and I’m going to play chess. No matter the judges or not, I’m here to do my job,” said Harrison.

Charlo isn’t much of a boxer, and he never has been. He tends to slug most of the time, hoping he can knockout his opponents. In Charlo’s fights against Demetrius Hopkins, Vanes Martirosyan and Gabriel Rosado, he struggled with them. A lot of boxing fans thought Martirosyan deserved the win in their fight in in March 2015.

Charlo won by the scores 97-93, 96-94 and 96-94. Boxing News 24 had Martirosyan winning that fight by a 6 rounds to 4 score. There was no way that Charlo did enough to deserve the win. As you would guess, Martirosyan wasn’t too happy about losing a controversial decision to Charlo.

“I’m not here to make no excuses. I’m going to do that, and I’m going to do just that,” said Harrison. “I said in this fight, I’m sitting down more. He’s nowhere near physically stronger than me. He had 12 rounds to hit me with his best shot, and I’m like ‘wow, why is all these guys going down?’ For me, I just think it’s the mental edge, and I think mentally, I can’t let a sucker beat me.

Tony was expecting Charlo to be a big knockout puncher obviously, but he found out that he’s not a huge puncher. With Charlo’s 48% KO percentage, he’s clearly NOT a puncher.

Harrison says Charlo was right pick for him