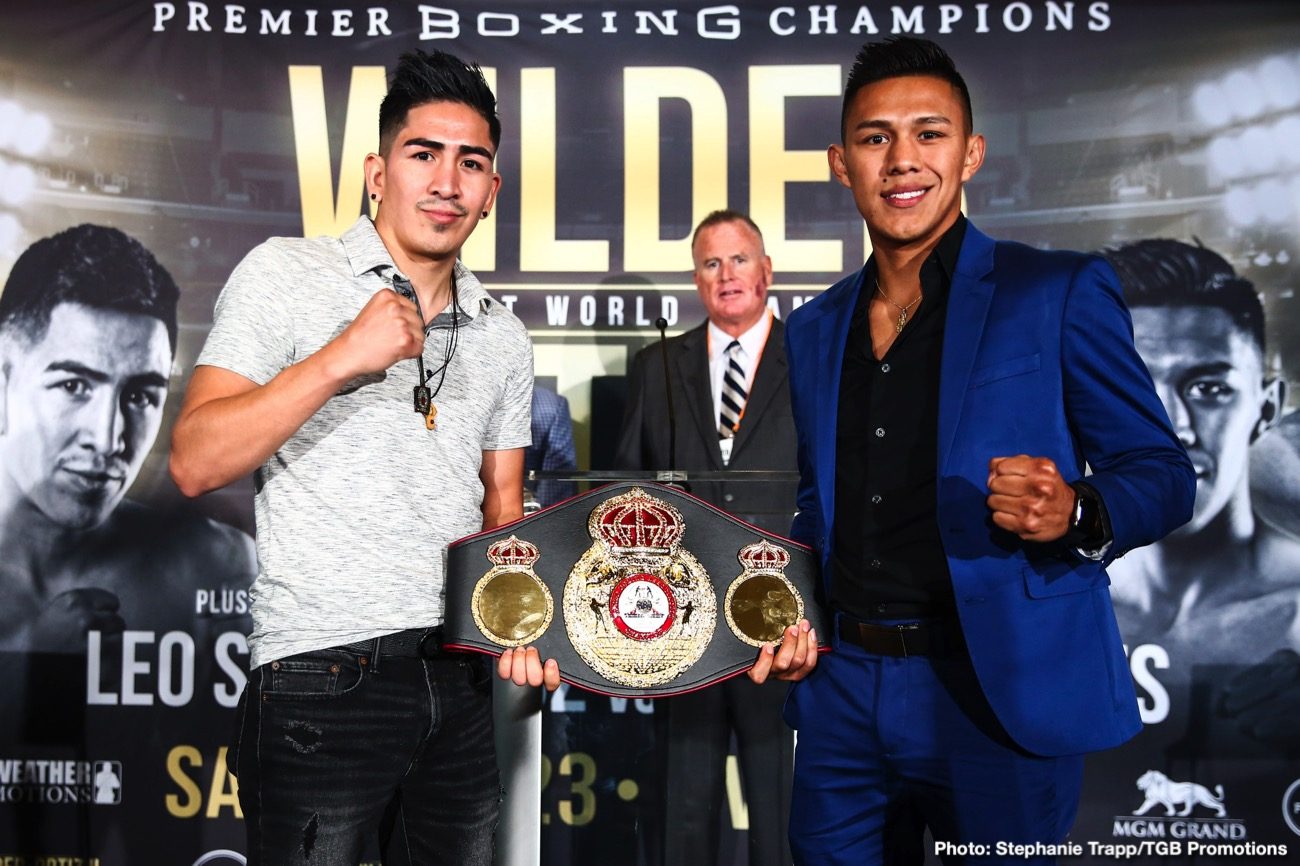 By Chris Williams: Leo Santa Cruz (36-1-1, 19 KOs) wants fans to know that his fight this Saturday night against Miguel Flores (24-2, 12 KOs) isn’t a cherry-pick like many of them perceive it to be. Santa Cruz states that Flores is a very good fighter, who will be pushing him every step of the way.

Flores and Santa Cruz will be competing for the vacante WBA Super World featherweight title this Saturday at the MGM Grand in Las Vegas. They’re fighting in the co-feature on the Deontay Wilder vs. Luis Ortiz card. Fox Sports PPV will be showing it.

Flores with 2-2 record in last 4 fights

Flores has come up empty in 2 of his last 4 fights in losses to Dat Nguyen and Chris Avalos. Those are good fighters, but more fringe level. Nguyen is 37, and Avalos (27-6, 20 KOs) is coming off of an 8th round knockout loss to Santa Cruz. When boxing fans see that Flores to Nguyen and Avalos, they naturally give him little chance of beating Santa Cruz.

The WBA believes in Flores enough to have him rated #2 at super featherweight, and that tells you something his talent. They wouldn’t rate Flores so highly if they didn’t believe he has talent. Both of those defeats for Flores took place in 2017.

NEWS:   The rise and inevitable fall of Deontay Wilder

“My dad is the one that studies the fighters, and he’s the one that watches them, and he’s telling what I can do,” Santa Cruz told PBC on Fox. “He said he drops his hands, and you can land some punches. I just go with that.

“I don’t think so,” said Santa Cruz when asked if he cherry picks opponents. “And I get in the gym and get ready for fights. Miguel Flores, I don’t think he’s a cherry pick. He’s a great fighter, and a tough fighter.

“They’re going to see that he’s no cherry. I train 100% in the gym. I know I’m going to get the win, and I hope he gets more opportunities. And I know he does…and after fighting me, I hope he wins,” said Santa Cruz.

The World Boxing Association was willing to sanction the fight between Santa Cruz and Flores for their WBA Super World 130-lb title. #1 WBA Rene Alvarado is challenging WBA ‘regular’ super featherweight champion Andrew Cancio for his title this Saturday.

With Alvarado already booked, Flores is the highest ranking contender at #2 in the WBA’ rankings. It’s not a cherry pick, but there are arguably better fighters than Flores at 130. Miguel ‘Mickey’ Roman and Oscar Valdez are two that come to mind.

“We were supposed to fight early this year and he got injured but now we will meet,” Santa Cruz said.“I’m excited to be back. I know that Miguel Flores is going to bring everything,” Leo Santa Cruz told Fightnews.com®. “And I think I have more to lose in this fight. I won’t let him beat me.”

There’s a good chance that Santa Cruz, 31, will knockout Flores on Saturday, but it won’t be easy. The way that Flores, 27, is talking about wanting to score a knockout on a body shot, it’s obvious that he’s going to try and slug. That’s Flores’ style, and he’s not going to change it for this fight. He’s going to bet on his youth to carry him through the contest.

Flores has won his last two fights, and that’ll help his self confidence against Santa Cruz. The guys that Flores has beaten recently, Luis May and Raul Chirino, aren’t world class though. Those fighters are second tier level opponents.

“I see weaknesses as well,” said Flores about Santa Cruz. “There’s some things he does well, but there’s also some things he doesn’t do well. I know he likes to fight, but I like to fight as well. So it’s going to be a great match-up. I think I can box a little bit more, and move my feet a little bit more than they think I can. I think he has” said Flores when asked if Santa Cruz has picked the wrong guy to be making his debut at 130.

“It’s all about timing, and this is my time now. I think a lot of people are fed up with the decisions he’s made in his career, and I think it’s time for a new face and a new champion. People say he hasn’t taken risks in his fights.

“As a fighter, there’s always a risk when you go in the ring. But people want to see certain fights, and he hasn’t given it. To people, he hasn’t [taken risks] that they would have liked him to,” said Flores.

There are weaknesses in Santa Cruz’s game, but the question is does Flores have the talent to exploit them? Fighters with good hand and foot speed give Santa Cruz issues, but Flores has neither of those things going for him.

If Flores was a bigger puncher, Santa Cruz have something to worry about. When it comes time for Santa Cruz to battle southpaw Gervonta ‘Tank’ Davis, he’s going to have a hard time with his power.

Santa Cruz will need to make adjustments to his game if he doesn’t want to get knocked out by Davis. But as far as Flores goes, he’s a volume puncher type of guy, and that’s probably not going to work for him against Leo.

“He’s got people whispering in his ear. He needs these big fights for the recognition. He’s a three division world champion, and it’s a dream for him to become a four division world champion. But guess what? I have a dream too, and I’m going to make the best out of this opportunity. I’m going to roll with the underdog, and I’m good with being the underdog.

“It takes pressure off of my shoulder, and it puts pressure on him. If I win, it’s my lottery ticket. So I’m training hard in the gym, but like I said, I do see weaknesses in his game. Outside of the ring, it’s nothing but respect for him and his accomplishments. inside the ring, I am trying to knock him out and beat him. I am trying to take that belt back,” said Flores.

Miguel raises a good point about Santa Cruz overlooking him. During the lead up to this fight, Leo has talked of wanting to fight Gervonta Davis. Santa Cruz wants to win his fourth division world title against Flores, and then go after a fifth division belt against Davis.

There’s more money for Santa Cruz in a fight against Tank Davis. He doesn’t plan on sticking around too much longer in the sport. So it’s not surprising that he’s telling the boxing media about his immediate and long range goals are. That’s the type of person Santa Cruz is. He’s open, and doesn’t hold back when giving interviews with people. Flores might not like it, but at least Santa Cruz is being honest.

Santa Cruz will go down from a body shot – Flores

“Like I said, sometimes you only get one opportunity, and I’m not going to let this one pass up,” said Flores about his fight with Santa Cruz. “In the ring, we’re going to try and knock each other out, at least I am,” said Flores. It’s going to be an action-packed fight. You play the fight in your mind a few times, and not a few times, a lot of times at night.

“I picture myself dropping him with a body shot. A lot of people say, ‘Your knockouts aren’t there,’ but I know that, but I’m a great body puncher. I can see myself dropping him with a body shot. I know he doesn’t like it, and nobody likes it, but I can see it happening. We’re fellow boxers, but inside the ring, I’m going to be trying to knock his head off,” said Flores.

It might be the wrong approach by Flores to be targeting Santa Cruz’s body. That’s a game plan that would result in Flores getting hit an awful low, and he doesn’t need that. Santa Cruz hits too hard, and he’ll do well if Flores wants to brawl with him.

The only fighter that Santa Cruz has had problems with during his 13-year professional career is Carl Frampton. What Carl did that was different from the other fighters is the way he attacked and then retreated.

Frampton didn’t stick around to let Santa Cruz land his shots. Frampton made adjustments, and showed a variety of different looks. He frustrated Frampton constantly, keeping him on the outside, and not allowing him to slug.