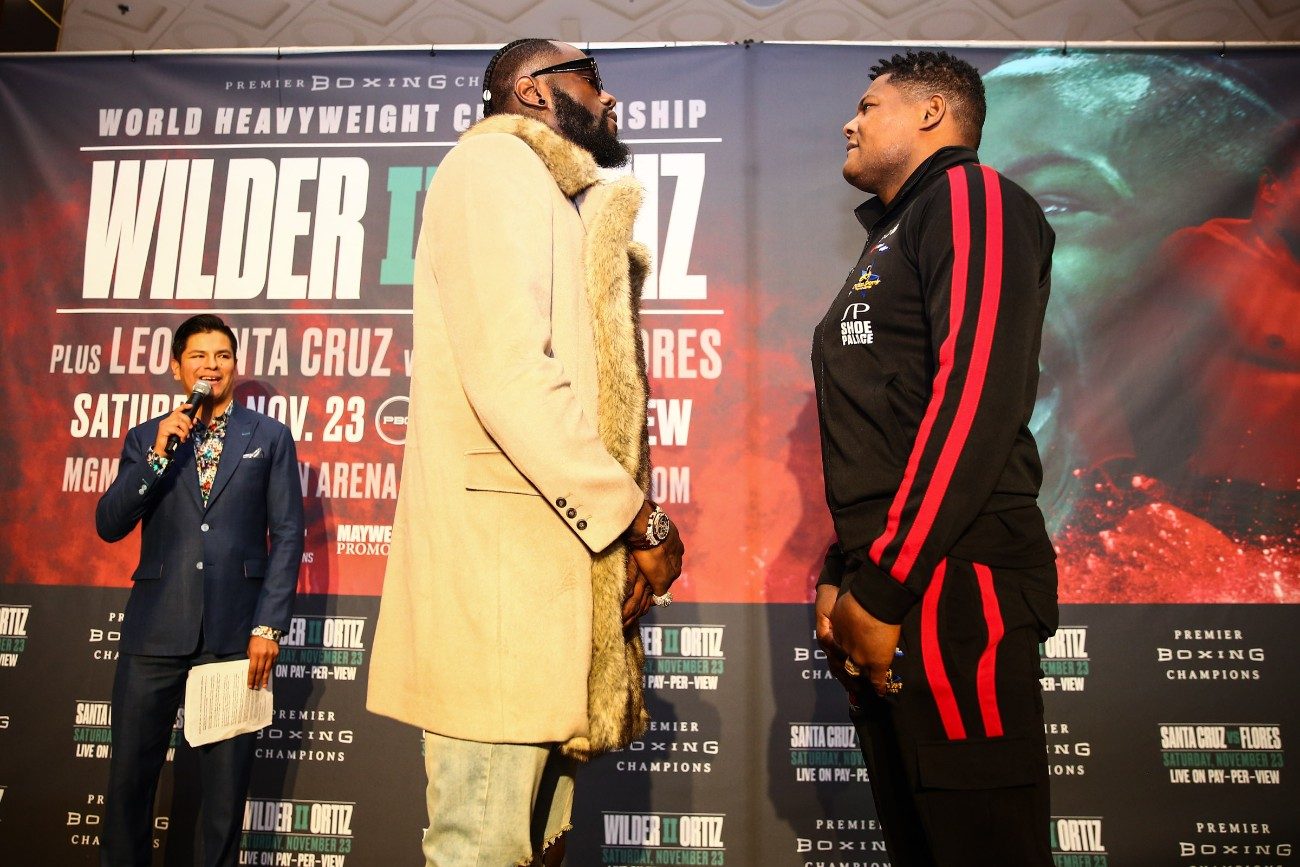 By Robert Addams: Evander Holyfield doesn’t understand the logic of Deontay Wilder giving a rematch to a dangerous fighter like Luis Ortiz. After all the problems that Wilder (41-0-1, 40 KOs) had beating the highly technical southpaw Ortiz (31-1, 26 KO), Holyfield thinks WBC heavyweight champion Wilder should have moved on to someone else.

If this backfires on Wilder, and he loses to Ortiz, then this will wreck his big money fights that he’s mapped out. Wilder has three heavyweights that he’s targeting for big paydays against Anthony Joshua, Andy Ruiz Jr. and Tyson Fury. A loss for Wilder against Ortiz will put those matches in question.

Taking a chance against Ortiz in a needless second fight doesn’t make sense, according to Holyfield. Wilder needed an opponent to stay busy while he waits for his rematch against Tyson Fury on February 22, and Ortiz was the best guy for the job. Wilder could have moved on to face one of the other top heavyweights, but there’s no one that he finds intriguing in the division.

Deontay wants a sense of accomplishment when he fights, and the 40-year-old Ortiz will give him that. Until Wilder gave Ortiz a chance, the Cuban was ignored by the other top heavyweights.

Holyfield: Why give Ortiz another chance?

“I don’t know why Wilder did it,” said Holyfield to Fighthype about Wilder choosing to fight Ortiz again. “Somehow you beat the very best, the guy that nobody wanted to fight, that nobody accepted an invitation to fight him. You beat him, now go on. You did it. Why give another chance to a guy that good? He chose to do it.

“How many people at 19 or 20, they get hit, and they come forward. Most people go backwards. Because he comes forward, he gets too close for the guy to hit him, because he’s taller than them. He’s a smart guy with a lot of confidence,” said Holyfield in talking about Wilder.

“He went straight forward, took another shot, and then grabbed the guy and held the guy. You get knocked out if you pull away from a guy. So he made a smart decision in that aspect. And then he came back and threw it down the pipe and boom!

Wilder obviously believes he can beat Ortiz a second time, because if he didn’t, he wouldn’t have chosen him. He’s not crazy. This is a fight that Wilder believes he can wni, and so does the boxing world.

People are writing Ortiz off because of his age. First off, they don’t believe that Ortiz is 40. They think he’s at least 10 years older than that, and they feel that’s too old.

Ortiz was given an offer to fight Anthony Joshua, but his management reportedly priced him out during negotiations. He would have likely gotten more money to fight Joshua. It’s possible that Ortiz will make a lot of money from the pay-per-view for the Wilder fight, but that depends on the buy rate.

Evander wants to see if Wilder can beat Ortiz again

“Let’s see if he can do it again. Wilder has got a lot of confidence. He’s the only guy I’ve ever seen. ‘I’m very confident.’ Sometimes I just look at him, and say, ‘I started boxing at eight-years-old,’ so I knew all this stuff. He started boxing at 19 or 20.

“That confidence is key to victory,” said Holyfield in discussing Wilder’s self belief.”All Wilder has got to do is the same thing. But if Ortiz makes adjustments, then Wilder has to prove how good he is to come back and redo it. He caught him with a big shot, but you’ve got to give Wilder credit for knowing what to do. He didn’t go backwards.

It would be a big accomplishment if Wilder can stop Ortiz a second time, and do it earlier. A lot of boxing fans are predicting an early knockout for Wilder. But if he gets careless, he could get stopped himself. Ortiz is too good of a fighter for Wilder to bum rush.

If Ortiz defeats Wilder, and Joshua beats Andy Ruiz Jr., it would setup a Joshua-Ortiz match. Ortiz would get a massive payday against Joshua, and he would be in the same position Ruiz is in right now looking to become wealthy overnight.

Ruiz Jr. is another fighter that believes that Ortiz is too old to beat Wilder, but he could be wrong. Ortiz has the technical skills to win this fight, and shock the world. He’s been in boxing longer than Wilder, and he knows different ways to win. What Wilder has going for him is size, youth and his raw power. Wilder’s punching power makes up for what he lacks in the technical skills department.