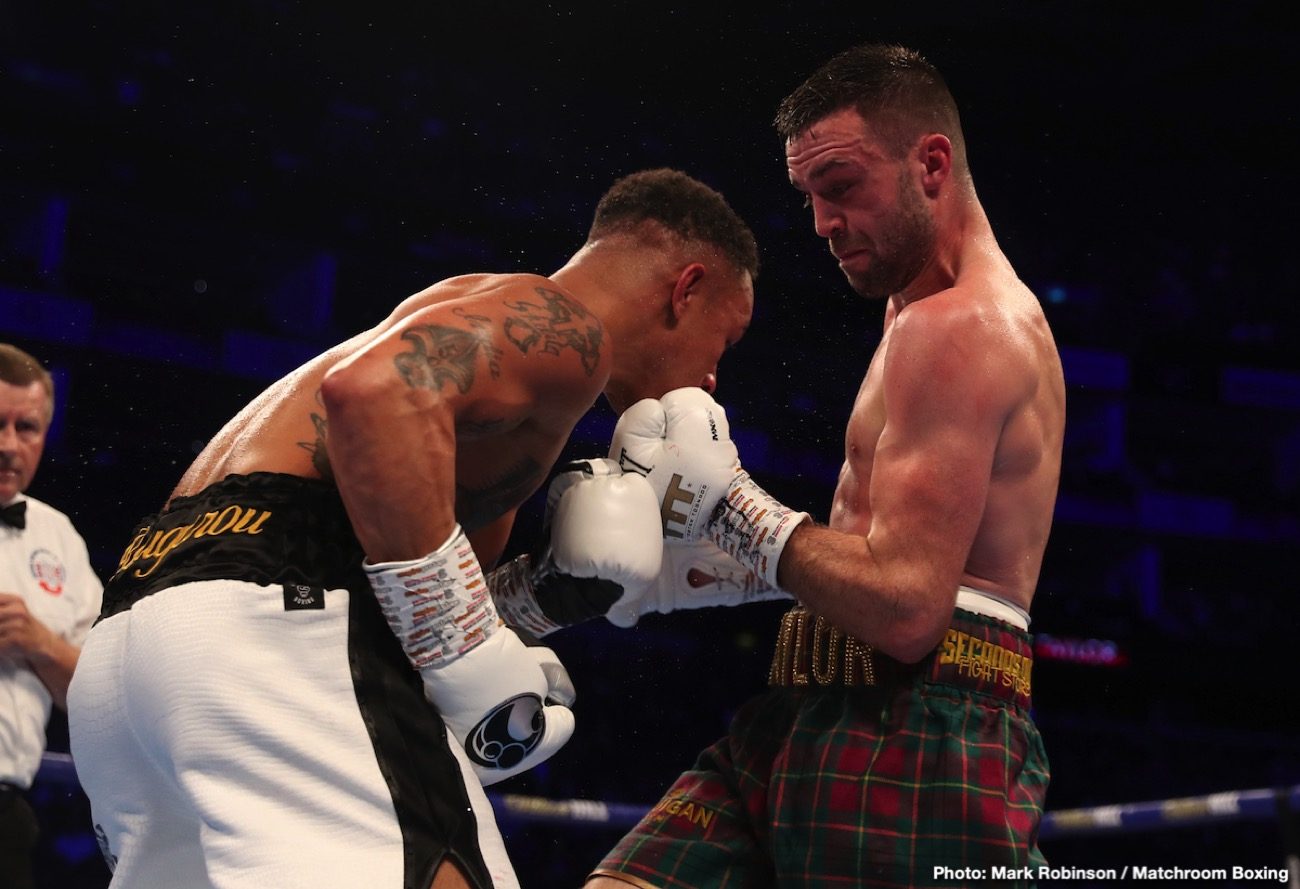 “I think Tank is too small, but everyone could be wrong, but I don’t think so,” said Prograis about Gervonta Davis calling out Josh Taylor.

Regis should be encouraging Davis instead of shooting down his chances of beating Taylor. After all, the American Davis would be avenging Prograis’ defeat.

It makes sense for Prograis to shoot down Tank Davis’ chances of beating Taylor, because if he admitted that he thought he could win, he’d be undercutting himself.  Prograis (24-1, 20 KOs) lost to Taylor by a 12 round majority decision last Saturday night on October 26 in the final of the World Boxing Super Series tournament at the O2 Arena in London. It would look bad if Tank Davis moved up to 140, and beat Taylor because it would show that Prograis isn’t on his level.

Davis, 5’5 1/2″, is almost 5 inches shorter than the 5’10” Taylor, and that’s a lot of size to be giving away. However, Gervonta is a huge puncher, and he’s unstoppable on the inside. His combination punching is second to none, and  he might be too much for Taylor to deal with unless he changed his game entirely. Prograis isn’t on the level of Gervonta in terms of punching power and boxing skills.

It doesn’t matter than Prograis fights two divisions above where Tank Davis has fought at his entire career. Davis is a more complete fighter than Prograis, and he would be a tougher opponent for Taylor to deal with. What could lead to Taylor’s downfall against Davis is the fact that he likes to slug on the inside. If Taylor brawled with Davis in close, he might not last long against him.

Regis admits it himself that he spent too much time brawling with Taylor, and not enough time boxing him. However, even when Prograis was boxing from the outside, he was getting the worst of it. Most would agree that Taylor fought better, and threw combinations. Prograis was throwing single shots and posing after throwing them. It was a one-dimensional approach to the fight by Regis, and there was no way that he was going to win fighting like that.

It was a close fight between Taylor and Prograis. The judges had it 117-112, 115-112 for Taylor, and 114-114. The perception is among fans that Prograis ran out of gas in the middle rounds, and didn’t do enough to win. Boxing News 24 had it for Taylor seven rounds to five. Prograis didn’t do nearly enough to get the victory.

Ellerbe confirms Gervonta will move up to 140

“Again, he’s going to be the biggest star in this entire sport very, very soon. Gervonta Davis is confident he can beat any of these guys out there. Him [Devin Haney], and any of these 135-pounders. They’re all terrific fighters, but my guy is the man,” said Ellerbe about Gervonta.

Before Gervonta moves up to 140, he’s going to be trying to win world titles at lightweight. He’s making his lightweight debut on December 28 against Yuriorkis Gamboa on Showtime in Atlanta, Georgia. The former two-time super featherweight champion Tank Davis will be tanking on former WBA featherweight champion Gamboa (30-2, 18 KOs) for the vacant World Boxing Association 135-lb title. It’s going to be interesting to see how Gervonta does against the always tough former 2004 Olympic gold medalist Gamboa.

If Davis wins that fight, he could go after WBC lightweight champion Devin Haney next. That would be a great fight. Ideally, a match between Davis and Vasiliy Lomachenko should happen, but the two-time Olympic gold medalist from Ukraine will be moving down to super featherweight in 2020. He’s not going to stick around to fight Gervonta or Haney for some reason.

Prograis denies that he gassed out against Taylor

“People think I got tired in the fight? That’s crazy,” said Prograis about his fight with Taylor. “My last two rounds were my strongest. People thought I got tired. I really didn’t get tired. My game plan was to fight it out. I know I can box for 12 rounds easily, but I like to fight it out. I just fought it out for too many rounds, and I shouldn’t have did that. When I was in London, a dude told me, ‘Man, you need to work on your fitness. You got a little tired.’

“That’s crazy because that’s the perception that people thought I got tired. I really didn’t because if I got tired because in the last three rounds, I felt were my strongest rounds. I came on really hard in the last three rounds. If you get tired, you can’t do that. I was fresh. It was me just fighting basically the wrong way. I was never hurt, and I took some big shots. But he definitely had power, but I was never hurt by that type of power. He definitely had power. Taylor has some big power,” said Prograis.

It’s disappointing that Prograis can’t admit that he tired out after four rounds against Taylor, considering that he stopped punching and was getting beaten up from round 5 to 10. To Prograis’ credit, he did come back in the 11th and 12th to fight well, but he’d given away six straight rounds from the 6th to the 10th to Taylor. If Prograis can’t admit what happened to him in that fight, then how is going to avenge the loss? Unfortunately, he probably won’t. If anyone is going to beat Taylor, it’ll be Tank Davis.

McGirt: Kovalev will SHOCK a lot of people on Saturday »