McGirt: Kovalev will SHOCK a lot of people on Saturday 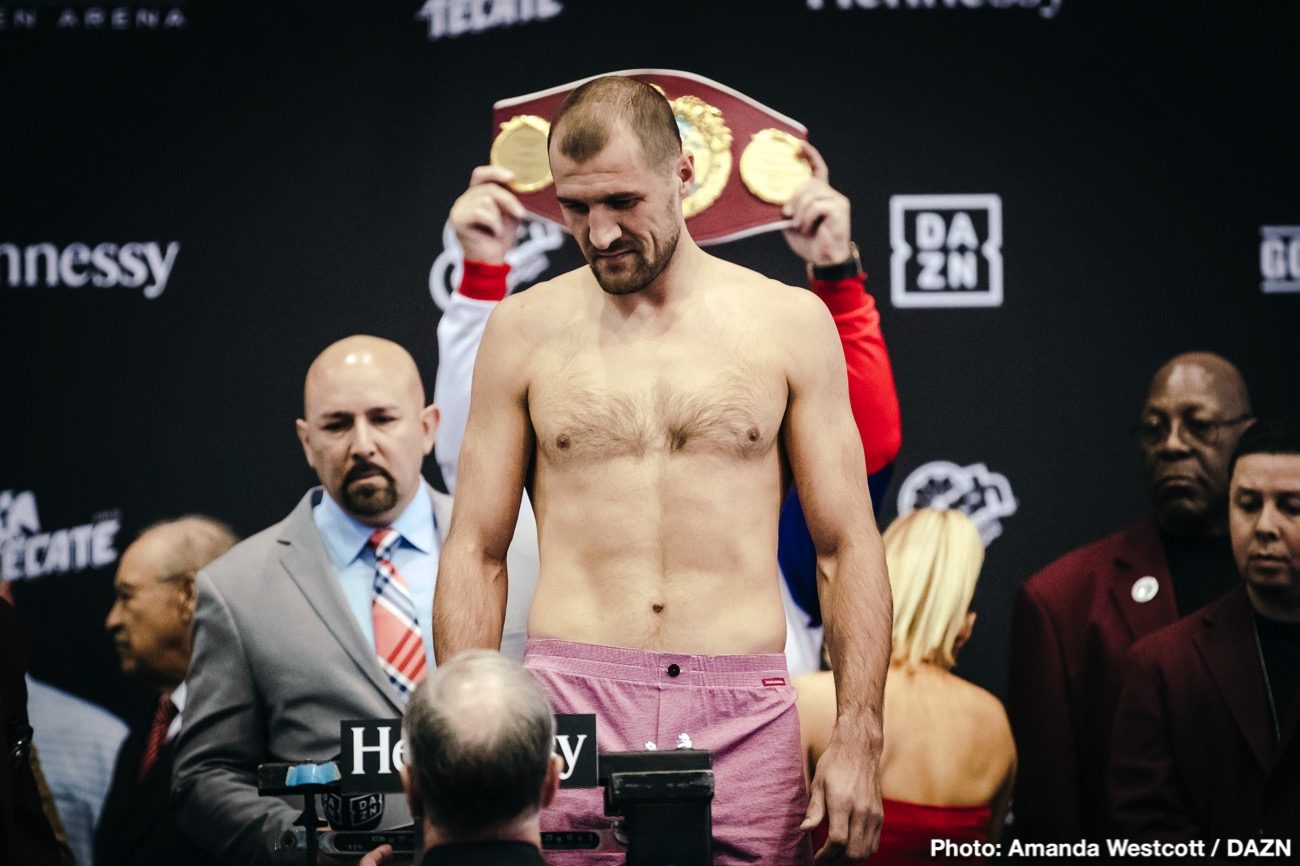 By Sean Jones: Sergey ‘Krusher’ Kovalev is going to “shock” a lot of fans on Saturday if he fights the way his trainer Buddy McGirt wants him to against Saul Canelo Alvarez. McGirt wants Kovalev (34-3-1, 29 KOs) to box Canelo Alvarez (52-1-2, 35 KOs), and not try and slug it out. Canelo is a counter puncher, and he’s at his best when he’s fighting someone that is looking to take his head off with every shot.

At this point, there are a massive amount of people picking against Kovalev, that it will be a “shock” if he beats Canelo Alvarez. Both the casual and boxing fans have written Kovalev off completely in this fight. If he does win, fans will have to admit that they got it wrong. But instead of giving Kovalev credit, the predictable outcome will see the fans criticizing Canelo, and saying he wasn’t as good as they thought he was. If you look Canelo’s RECENT wins over Gennadiy Golovkin and Daniel Jacobs, he’s clearly not as good as people think.

If Canelo is great, then GGG and Jacobs are both there at the same spot, because they almost beat him. What Canelo has going for him is a huge fan base. He’s clearly not much better than Golovkin and Jacobs, but what he does have is a big fan base.

There are fighters obviously at 175 that would likely destroy Canelo regardless of his skills, head movement and counter-punching, but Kovalev isn’t one of them. He needs to box Canelo to have a shot at winning the fight. IBF/WBC light heavyweight champion Artur Beterbiev is a guy that would likely walk through every counter-punch Canelo would throw to take him out with a body shot. That fact that Canelo and his trainers Chepo and Eddy Reynoso didn’t select the undefeated Beterbiev (15-0, 15 KOs) tells you all you need to know.

They made sure that Canelo’s risk at 175 is a “calculated” one, as Andre Ward calls it. They picked Kovalev because he’s vulnerable at 36 and ready to be beaten by a much smaller 5’8″ Canelo. If they’re wrong, Canelo will be laid out on the canvas on Saturday night, wondering what happened to him. But if the Reynosos are right, then Canelo will be covered with glory in winning his 4th division world title against a much bigger fighter than himself.

Kovalev will be defending his WBO 175-lb strap against challenger at the MGM Grand Garden Arena in Las Vegas, Nevada.

McGirt predicting Kovalev to surprise a lot of people

“He’s not just a puncher, and he’s got a lot in his arsenal. But he’s just never used it. Sometimes in the gym, that switch clicks and he puts it all together, and I feel bad for the guys that are sparring with him. I’m not going to say that because I’m not one to say that [predict a KO win over Canelo]. What I’m saying is he’s going to shock a lot of people on Saturday night,” said Kovalev.

McGirt is hoping that Kovalev boxes Canelo on Saturday, but he doesn’t sound sure whether he’ll do that consistently. When McGirt mentions how good Kovalev looks when he switches it on during his sparring session in boxing his training partners, he hints that he doesn’t do all the time. We saw in Kovalev’s last fight against Anthony Yarde that he comes unglued when he tries to slug a little too much. Yarde came close to knocking Kovalev out in the 8th round after hurting him.

“I have more experience now,” said Kovalev to Fighthype. “Listen, I’m not going to surprise people. I’m going to get in the ring and do my job. My job that is most important is to get the victory. And I’m working on my glory and my future. What I must do is get a victory over this guy.

“This is my goal. How this is going to be for everybody, surprise or no surprise, I don’t care. I feel like something because I had already a wrong decision [against Andre Ward]. My job is to show to the people good boxing, and a good fight,” said Kovalev.

Having boxing fans and the media overlooking him seems like it’s become a sore spot for Kovalev. He’s obviously not used to being seen as the underdog going into one of his fights. But what makes it worse this time is that Canelo is coming up 2 weight classes to fight him, and he’s not nearly as big. Moreover, Canelo barely beat Daniel Jacobs and Gennadiy Golovkin in recent fights.

If Kovalev is able to fight better than those guys, he has a good chance of beating Canelo. It’s easy to see where Jacobs and Golovkin blew it against Canelo. They didn’t fight hard enough early on and weren’t smart about making adjustments in rounds 1 through 6. When they both finally wore Canelo down in rounds 7 through 12, they were too far behind on the scorecards to make up the difference. Canelo’s performances against GGG and Jacobs showed that he CAN be beaten, even though those guys didn’t do it. They came very, very close to defeating Canelo.

“I really like Canelo as a fighter,” said Devin Haney to Fighthype. “Yeah, I think Canelo is in his prime right now,” said Haney when asked if Canelo beats Kovalev. “I don’t see too many fighters out there being able to beat him. He has a lot of tools, and he has a great jab, head movement, and he’ll go in there. I don’t think he’ll stop him, but it should be fairly easy by out-boxing him,” said Haney.

The 20-year-old WBC lightweight champion Devin Haney sounds very young and naive in predicting an easy win for Canelo over Kovalev. Just looking at Canelo’s recent fight against Jacobs, he’s not going to have it easy against Kovalev.

Canelo is a good fighter, but there’s not much that separates him from the top guys now. The only time it’s been easy for Canelo in the last two years is when he’s fought guys like Rocky Fielding and Julio Cesar Chavez Jr. Canelo arguably should have lost the first fight with Golovkin.

Kovalev has slowed down since Ward fight says Haney

“I think he’s [Kovalev] slowed down since the [Andre] Ward fight,” said Haney. “I think the fights with Ward took a lot out of him, and I don’t think he’s been the same since. Canelo has great head movement, and he’s in his prime right now, as I said. We’ve been talking about the body shots so much that Kovalev will go in there and make the adjustment [to avoid them], and he’ll know how to block the body shots,” said Haney.

Devin says Kovalev has slowed down since his second loss to Andre Ward in 2017, and he feels that a product of the damage he took in those fights. The reality is, Kovalev wasn’t hit that much in either fight with Ward. In the first fight between them, Ward wrestled Kovalev for 12 rounds and won a controversial 12 round decision.

There were very few punches landed by Ward to the head of Kovalev. When he did land, it was body shots while holding onto Kovalev with one arm in close. Those punches aren’t the type that have long-lasting effects. In the rematch, Ward landed one good head-shot that hurt Kovalev followed by 3 low blows. The fight was then stopped. Kovalev didn’t get hit with a lot of head-shots by Ward in that fight. What Haney is seeing from the 36-year-old Kovalev is the product of age. When fighters hit their early to mid-30s, they start to slow down. Haney will likely experience the same thing when he gets to that age if he’s still fighting.

“He was an Olympic fighter with 18 wins and 1 loss, and he knocked him out,” said trainer Chepo Reynoso to esnewsreporting about Canelo having knocked out a former Olympic heavyweight 3 weeks ago.”

Canelo’s trainer Chepo Reynoso isn’t saying who the Olympic heavyweight is that Canelo supposedly knocked out, but it’s rumored to be 2012 U.S Olympian Michael Hunter (18-1, 12 KOs). It’s rumored that Canelo knocked Hunter down, but didn’t knock him out. Hopefully, that isn’t planting ideas into the head of Chepo to have Canelo move up to heavyweight to challenge one of the champions, because he’ll be out of his league. If Canelo chooses a weak heavyweight champion like Manuel Charr, he’ll be criticized like he is now for not fighting the best.

Boxing » Canelo Alvarez » McGirt: Kovalev will SHOCK a lot of people on Saturday