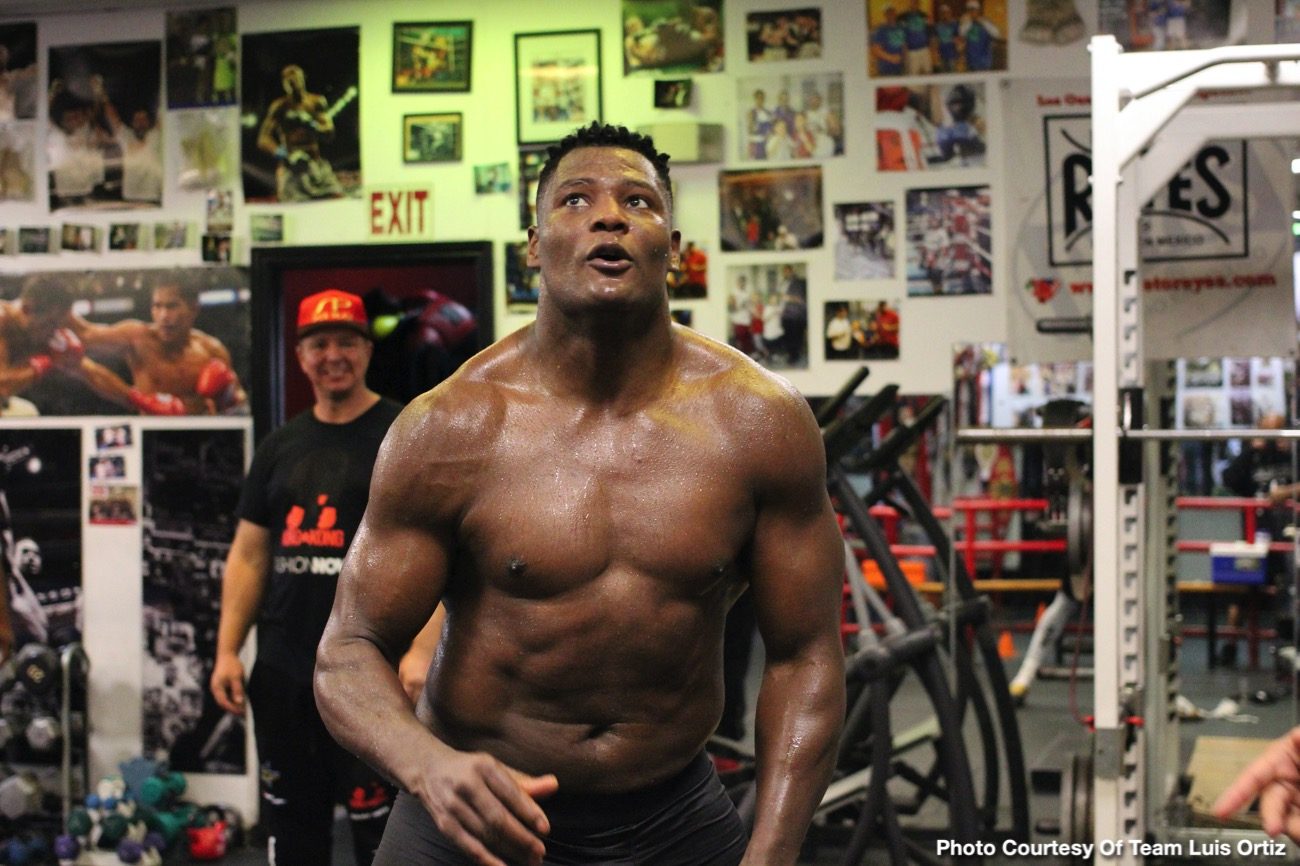 By Chris Williams: With 7 days to go before their rematch on November 23, challenger Luis ‘King Kong’ Ortiz is looking more shredded than a julienne salad for his title fight against WBC heavyweight champion Deontay Wilder at the MGM Grand in Las Vegas. The fight will be shown on Fox Sports PPV.

Ortiz has put everything into his training camp to get in the best possible shape. The former world title challenger know what’s on the line in this fight.  The highly ranked Cuban southpaw Ortiz has never looked this ripped before in training for a fight as a professional. Whatever Ortiz did to get this cut up, he needs to continue to do this moving forward.

Ortiz’s best weights in his career:

It was no coincidence that Ortiz was fighting at a high level when his weight was in the 230. Since 2016, Ortiz has weighed in the 240s, and not looked as sharp or as fast compared to when he was lighter.

King Kong Ortiz will be trying to achieve his lifelong dream by winning a heavyweight world title, and becoming a world champion.

It’s going to be interesting to see if Ortiz’s new physique will result in him fighting at a higher level. Wilder barely got through his previous fight with Ortiz with him looking kind of chunky. If Ortiz’s new s

Wilder is the best heavyweight of the decade

Ortiz believes that the unbeaten Wilder (41-0-1, 40 KOs) is the BEST heavyweight of this decade, which is a huge compliment.  With all the excellent heavyweights that have been around, picking Wilder as the best says a lot.

“Until someone beats him, Wilder is the best heavyweight of this decade,” Ortiz said.

Ortiz (31-1, KOs) came close to beating Wilder the last time they fought in March 2018, but he couldn’t do it. He ran out of gas from his expenditure of energy in the 7th round, and couldn’t get his second wind to finish the job.

Ortiz has bounced back from his loss to Wilder by winning his last three fights against credible opposition. Luis didn’t fight anyone super talented, but he did what he was supposed to do.

Ortiz will need to take some shots to win

Luis couldn’t handle Wilder’s punching power last year, and he was stopped in the 10th. Ortiz took most of Wilder’s shots in the fight, but in rounds 5, 9 and 10, he was hurt. Wilder got a little overconfident in the 5th after dropping Ortiz.

Two rounds later, Ortiz caught Wilder with a right hand counter that shook him to his boots after he’d thrown a right hand. Wilder wasn’t ready for the counter, and his legs turned to jelly.

It’s important that Ortiz be able to handle Wilder’s power long enough for him to land his big shots, because he won’t win if he can’t take his power.