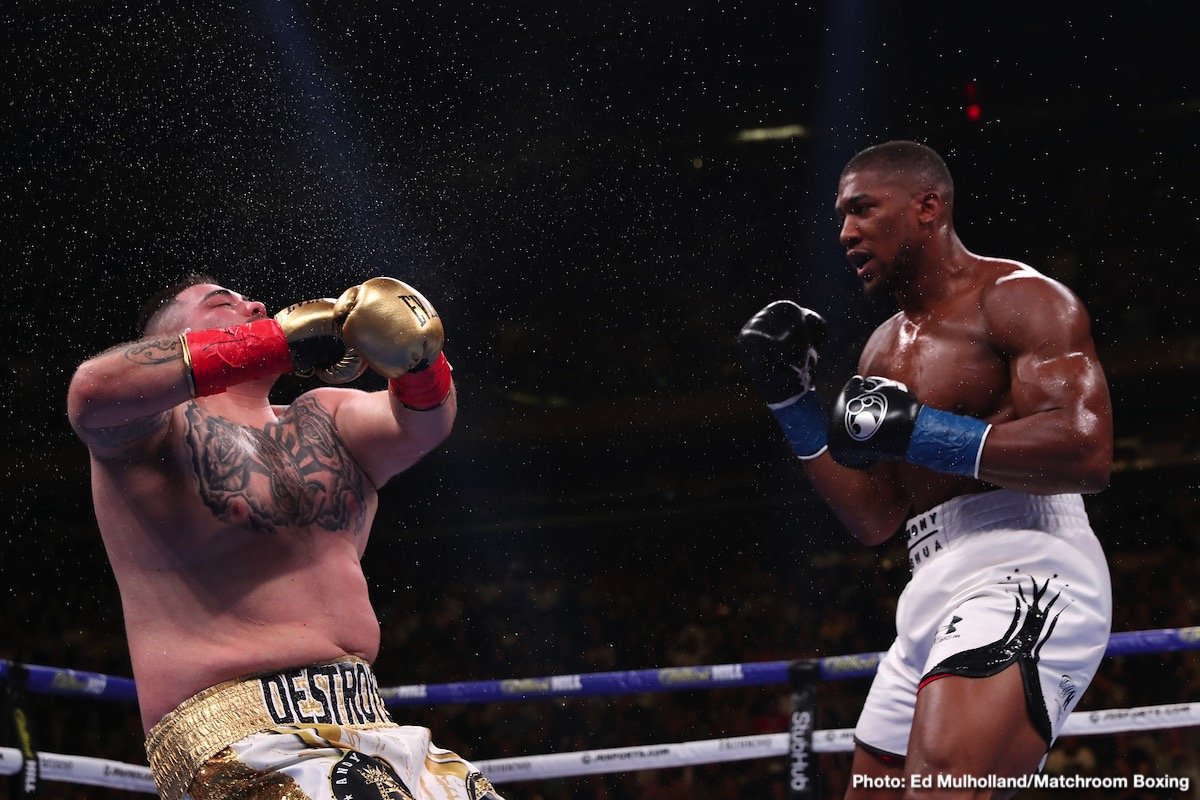 By Scott Gilfoid: Hughie Fury’s dad Peter Fury is predicting that Anthony Joshua will overcome adversity to defeat Andy Ruiz Jr. in their rematch on December 7 in Saudi Arabia. It didn’t work for Joshua last time he fought Ruiz, but Peter thinks he’ll get it right the second time.

Fury is banging on about how former IBF/WBA/WBO heavyweight champion Joshua (22-1, 21 KOs) is going to rise up and win because he’s dedicated and blah-blah-blah.

Peter is the uncle of lineal heavyweight champion Tyson Fury, and really likes Joshua’s chances for the rematch.

“I think he’ll do well. I think he’ll show that. He’s dedicated, he’s a proper athlete, and I think he’ll come through it,” said Peter to skysports.com. “Look at the admiration he had when he was winning everything and then look at what people do as soon as you have a hiccup,”

Gilfoid can’t wait to hear what Peter Fury says when/if Ruiz knocks Joshua out a second time on December 7. Will he continue blabbering about how “he’s dedicated” and a “proper athlete” or will he come down to earth and see Joshua for the fighter he is?

Peter seems to have an idealistic view of Joshua inside his head that doesn’t match the fighter that he is. If Joshua was as talented as Peter thinks he is, he wouldn’t have been knocked out by Ruiz, would he? What about Joshua’s fights against Wladimir Klitschko, Alexander Povetkin and Dillian Whyte? All three of those guys had Joshua staggering.

What happens if Joshua loses again?

If Joshua gets obliterated a second time by Ruiz, guys like Peter and others are going to need to realize that the overestimated his talent. Right? If Joshua is the guy that was supposed to be the next Joe Louis, then why in the heck did his reign end after just 3 years? I’m just saying.

I don’t know if Peter has been keeping track, but Joshua hadn’t exactly been taking on the major talents in the division since turning professional. The 6’7″ Deontay Wilder has been trying to lure Joshua into the ring for the last three years with no luck.

So he didn’t want to accept the offer from Wilder’s team to fight him for big CASH. Instead, Joshua padded his record against the likes of Alexander Povetkin, Joseph Parker, Eric Molina, Wladimir Klitschko, Dominic Breaeale and Charles Martin.


« Artur Beterbiev: Is he too POWERFUL for Canelo Alvarez?