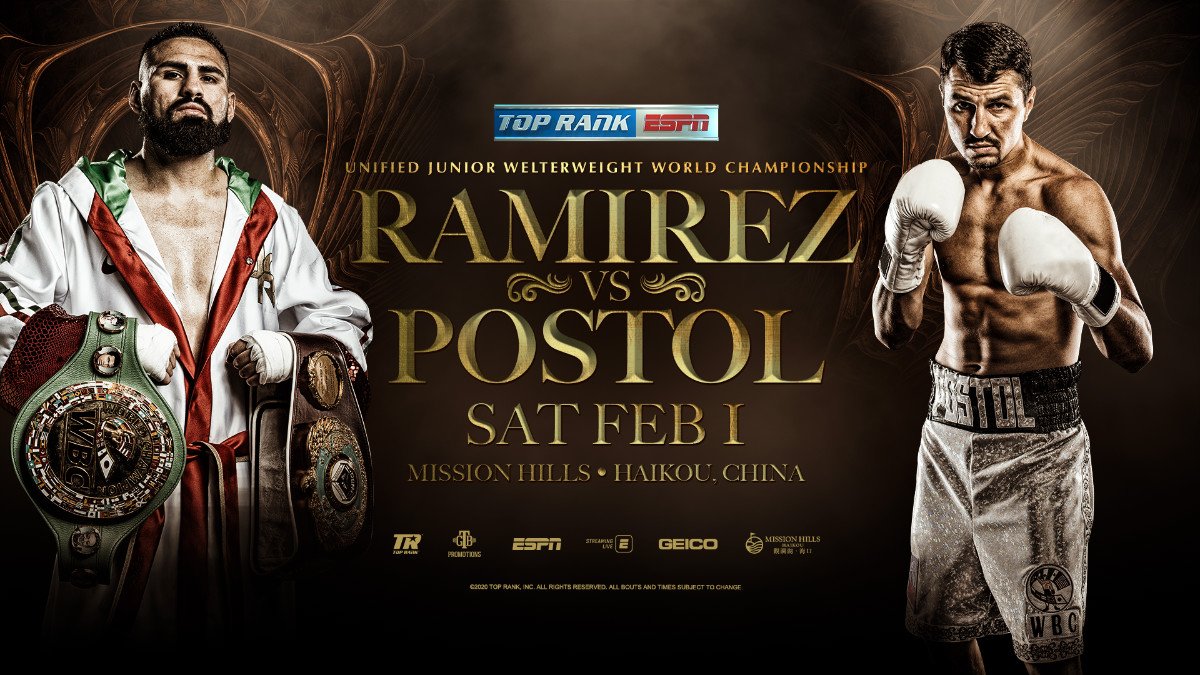 (Jan. 23, 2020) — Jose Ramirez’s WBC/WBO junior welterweight world title defense against former world champion Viktor “The Iceman” Postol — originally scheduled to be broadcast live on ESPN from Mission Hills Haikou in Hainan, China on Saturday, Feb. 1 — has been postponed due to the coronavirus outbreak in China.

The Ramirez-Postol bout will be contested at a date and venue to be determined.

“The health and safety of our fighters and everyone working on the event is the most important thing,” said Top Rank chairman Bob Arum. “We hope the situation is brought under control soon. We look forward to staging events at Mission Hills Haikou in the very near future.”

Ramirez unified world titles in July with a sixth-round knockout over Maurice Hooker in a Fight of the Year contender. Ramirez-Postol will be the first Top Rank on ESPN event to be contested on Chinese soil.

Promoted by Top Rank, in association with SECA and TGB Promotions, Ramirez-Postol and a co-feature will be televised live by ESPN and ESPN Deportes at 10 p.m ET/7 p.m. PT (Sunday, Feb. 2 local time), with undercard action slated for ESPN+ beginning at 7 p.m. ET/4 p.m. PT.

“Boxing is a global sport, and it is with great pleasure that we bring one of the sport’s great champions, Jose Ramirez, to the beautiful Mission Hills Haikou,” said Top Rank chairman Bob Arum. “Jose is coming off a career-best victory, but he can’t afford to overlook Postol, who is a tremendous former world champion.”

“I am excited to defend my belts against Viktor Postol to kick off my 2020 schedule,” Ramirez said. “I am a world champion, so it is my honor to defend my titles in front of the great fans in China. It is going to be a great experience, and I am glad that my fans back home will be able to watch me live on ESPN. As a unified champion, I am hungrier than ever.”

“I would like to thank the WBC, WBO, Tom Brown and TGB Promotions, Top Rank and everyone involved for making this fight happen,” Postol said. “It’s a big opportunity for me and a big honor to share the ring with one of the best fighters in my division. I know Ramirez, as we sparred together in the past. I’m looking forward to a great fight in China.”

Ramirez (25-0, 17 KOs), from Avenal, Calif., is one of two unified junior welterweight champions. He won the WBC world title in March 2018, prevailing via 12-round shootout against Amir Imam in New York City. He defended that belt twice at the Save Mart Center in Fresno before stepping up to fight Hooker. His return was slightly delayed, as recovered from surgery on his left hand to repair an ongoing injury. A 2012 U.S. Olympian, Ramirez fought in China in 2015 at Cotai Arena in Macau, improving to 15-0 with a third-round stoppage over Ryusei Yoshida.

Postol (31-2, 12 KOs) has spent the majority of his 12-year career as a super lightweight and nearly a decade at, or near, the top of the division. He stunned the boxing world in October 2015 when he dethroned Lucas Matthysse via 10th-round KO to win the WBC world title. In his next fight, he was blunted over 12 rounds by Terence Crawford in a unification bout. He is 3-1 since the Crawford defeat, dropping a 2018 decision to Josh Taylor, who is now the division’s other unified champion. He earned the WBC’s mandatory shot at Ramirez in April with a unanimous decision over Mohamed Mimoune.

Use the hashtag #RamirezPostol to join the conversation on social media.