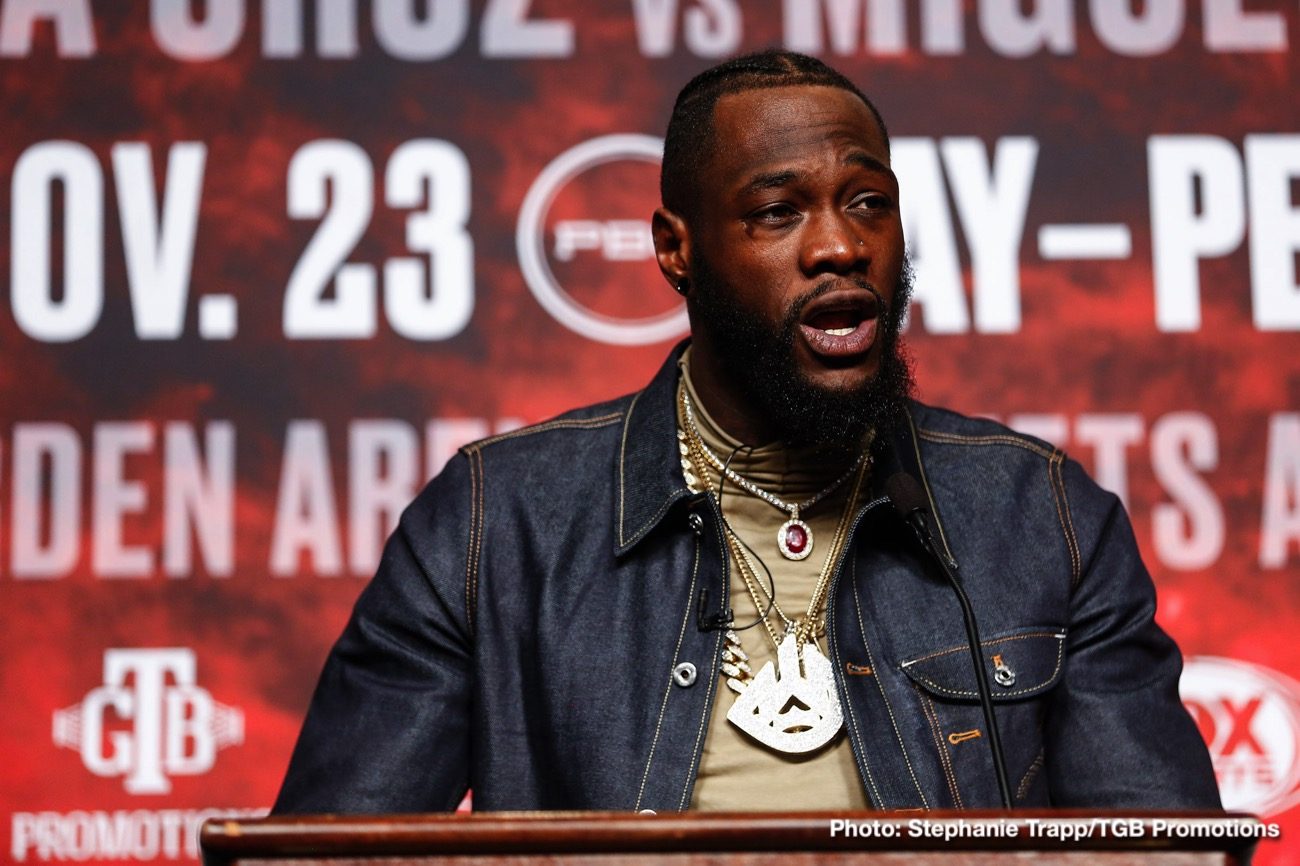 By Scott Gilfoid: Deontay Wilder has given his three-fight plan that he’s mapped out for himself. WBC heavyweight champion Wilder says his first order of business is to obliterate Luis Ortiz (31-1, 26 KOs) this Saturday, and then he’ll face Tyson Fury next February, and then he’ll finish off with fighting the Anthony Joshua vs. Andy Ruiz Jr. winner.

Of those fighters, Wilder (41-0-1, 40 KOs) appears to be the least concerned with the Fury fight. The British heavyweight has no power to speak of, and he’s still nursing a bad cut. Wilder dropped Fury hard in the 12th last December, and it should have been a knockout. For the rematch with Fury, Wilder will wade forward and treat the fight like it’s the 13th round.

“So after this fight, I’m looking forward to the rematch with Fury, and after I knock Fury out, I’m looking for the winner of Joshua and Ruiz,” said Wilder. “Hopefully it’s Ruiz, because if Joshua gets it, I don’t think there’s going to be a unification bout. But if Ruiz gets it, we’re in the same stable, and it’ll be an easier fight to make.

“People will be able to say, ‘We finally got a unification in the heavyweight division,’ and it will be Deontay Wilder. His hand is raised, and they will say, ‘And STILL, the undefeated heavyweight champion of the world, Deontay Wilder.’

“America has a bad man in Deontay Wilder. I’ve been around for years. My work in these last past few fights have been noticed, and as a fighter, that’s all you can keep doing. You keep training, you keep working, and you keep giving what the fans want to see. I appreciate you guys love, and your passion for the sport of boxing. Come Saturday, baby, let’s turn up,” said Wilder.

Deontay isn’t confident that he’ll get a fight against Joshua if he comes out victorious against Ruiz on December 7. If Joshua beats Ruiz, it would be bad for boxing, because negotiating a unification match with Wilder will be difficult. Joshua’s promoter Eddie Hearn hasn’t shown a willingness to give Wilder a good deal in the past, and he’s not going to take a flat fee.

Hearn spoke of offering Wilder a flat fee of $12 million for a fight that would have made massive money. With that history of negotiations, it doesn’t look like it’s possible to make the fight.

Deontay sees his stamina leading him to victory

“I think this fight is based on who is the fittest, and who has the most stamina, and who is going to be able to go,” said Wilder. “We know that my power carries from the first to the twelfth round. So it’s going to be an amazing fight come Saturday night,” said Wilder about his rematch with Ortiz. “We all know that the heavyweight division was in a dark place at one point in time.

“Due to myself and other heavyweights in the division, we’ve made exciting again, and here we are. With me being a champion and defending it so many times, I feel like it’s my duty to provide you with the best of the best. That’s why I went a whole trial coming with Ortiz, then Fury, and then coming back and doing the repeat all over again.

“You know, because these are great fights, and a great moment in the heavyweight division. I want to give you guys an amazing time so that you guys can go back and say, ‘In our era, we saw the best of the best.’ The more records I break, the more success I gain,” said Wilder.

Stamina likely won’t play a factor in Saturday’s Wilder vs. Ortiz rematch. The odds-makers are predicting an early knockout win for Wilder, and it doesn’t matter that Ortiz is in better shape. His chin is still going to be the same. Ortiz couldn’t handle Wilder’s power last time they fought, so he’s probably not going to be able to take it in the rematch.

Ortiz has the momentum – Wilder

“This is why we’re all here, to see what’s going to happen,” said Wilder. “Although I knocked Ortiz out in the first fight, it was an amazing fight. It was a fight where I was challenged the most, tested the most. I had to really strategically move in there with Ortiz. I understand why none of the other heavyweights want to waste their time in there with Ortiz, because he’s very dangerous.

“They will call him old, but we all know that age ain’t nothing but a number. It’s all about how you’re feeling inside, and this man is on a mission. He has a little daughter he wants to care for. That’s why I blessed him for a second time, and he wants to be the first Cuban heavyweight champion of the world to make history for himself, and for his people.

Wilder: I don’t get paid for overtime

“Halloween has passed, but we can relive it on November 23,” said Wilder. “If I say too much about myself, they’ll say I’m cocky and arrogant, so I’ll let people be the judge of that. I only have six years to spread my love, my energy and my passion for the sport. I just ask people to enjoy it while they can, because I will be one of those fighters 10 years later, people will say, ‘He was a bad mother-f—-.

“Unfortunately, I don’t get paid for overtime,” said Wilder. “So it’s not going 12 rounds. But when the fight do happen, I’m a fighter you can’t take a break. You can’t go to the concession stand, and you can’t go to the bathroom. Like I said, you can’t drop something or look at your cell-phone, because of a split of a second, it could be over with.

“I don’t want you to be one of those ones that say, ‘What happened?’ or looking at the replays, because it’s not going to do any justice,” Wilder continued. “I want you guys to be ready for when I come out at full attention, because we don’t know when it’s coming, but it’s coming. When it comes, it’s going to be, ‘Bam,’ baby, goodnight,” said Wilder.

Deontay isn’t going to waste time in the rematch with Ortiz, and I think everyone knows that. Even Ortiz understands that Wilder is going to come after him immediately on Saturday, but he’s still not going to be able to block enough shots to last long. 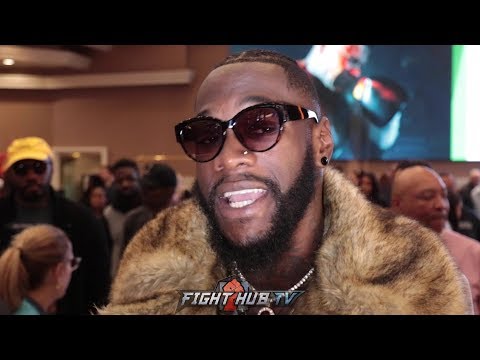 Wilder – it’ll be over once I find my range

“I did figure him [Ortiz] out, a little later, maybe in the 5th round, and different things like that,” Wilder remarked in remembering his first fight with Ortiz. “With a southpaw like that, it takes a little time. You can’t just go in there and do anything with a fighter like that. You’re going to be the one on the canvas looking up among the lights, and have maybe have stars going around your head. So I’m going to strategically move around the ring with him.

“I’m going to figure him out just like I did the first time, but I think it’s going to be a little bit quicker this time, because we know each other a little bit more,” said Wilder. “Once I find my target and my range, it’s goodnight, Ortiz. we always plan on having one champion, one face, one name, but as we know in life, things don’t go as planned. We do set our goals, but there is another plan, but it doesn’t stop us from setting it,” Wilder said.

Wilder hurt Ortiz even when he was in close last year, and it didn’t seem to matter that he wasn’t at his best range. His power was still too much for Ortiz to take it.