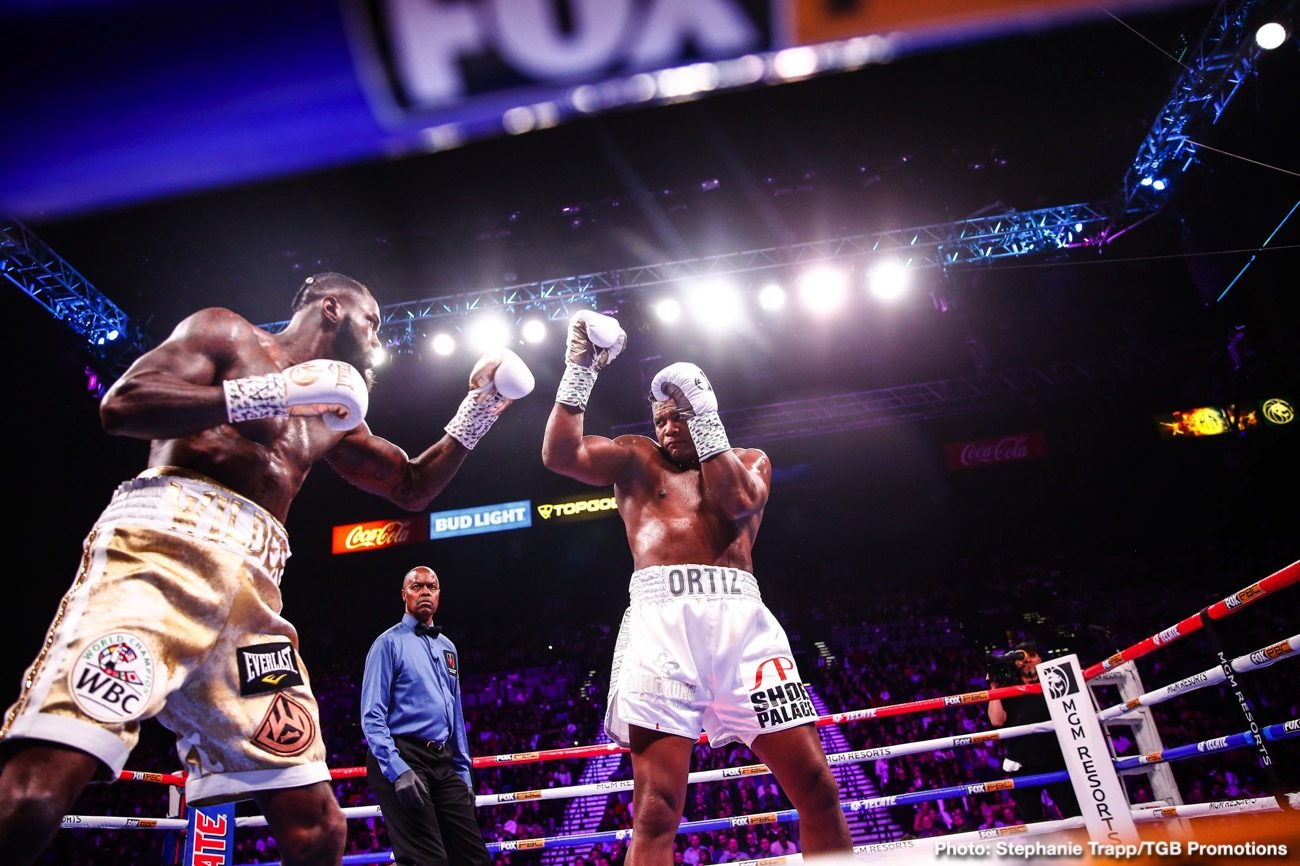 By Allan Fox:  Luis ‘King Kong’ Ortiz’s trainer German Caicedo says he would be willing to fight the loser of the Anthony Joshua vs. Andy Ruiz Jr. 2 rematch on December 7th. Caicedo understands that Ortiz isn’t in the position to fight the winner of the Joshua-Ruiz Jr fight, but he’s interested in fighting the loser of the bout.

That would be an excellent fight for Ortiz, and for the fans to face the loser of the Joshua-Ruiz rematch. However, if Joshua loses to Ruiz, he’s unlikely to fight Ortiz, since he and his promoter Eddie Hearn have never shown interest in setting up a bout with Ortiz. They’ve picked out arguably lesser fighters in the last three years rather than take on Ortiz in a risky fight.

The reason Ortz was hurt in the 7th round is because he “RELAXED” due to fatigue setting in his rematch with Wilder.

Caicedo states that the unbeaten Wilder (42-0-1, 41 KOs) is the WRONG guy to be relaxing against, because of his punching power and talent, and Ortiz made a mistake. Ortiz didn’t see the right hand that knocked him out, says Caicedo.

Caicedo maintains that the fight shouldn’t have been stopped by referee Kenney Bayless after Ortiz was dropped by Wilder. Ortiz got up in time to resume fighting, but Bayless pulled the plug on the fight.

Caicedo has two theories for why Bayless stopped it. Theory one is, he lost track of the count and just stopped it without realizing that Ortiz had beaten the count. Theory 2 is that he was worried about Wilder chopping Ortiz down with one of his shots.

Joshua vs. Ruiz loser a desired fight for Ortiz

It would be interesting to see Ortiz fighting the loser of the Joshua-Ruiz 2 rematch, because it would give fans a chance to compare. However, the loser of the Joshua vs. Ruiz fight is likely going to be put in with a soft opponent for a confidence booster. Ruiz isn’t the type to fight a weak opponent, but Joshua would definitely be one that would be matched weakly.

It’s not that it’s Joshua personally asking for a soft tough. His promoter Eddie Hearn would be the one that would want to step him back a level, because it would be his second consecutive loss to Ruiz. If Hearn throws Joshua in with Ortiz after losing to Ruiz, it could be bad for the British heavyweight. Ortiz is a seasoned vet with boxing skills, power and stamina.

Ortiz RELAXED and got caught by Wilder in round 7

“He’ll sleep good tonight, because he knows he left nothing in the ring,” said Caicedo about his performance against Wilder. “Maybe the referee lets him keep fighting or maybe the referee says, ‘You’re good to go,’ or maybe it happens in the next round or maybe it doesn’t. You’ll never know. Anybody.

“It was the 7th round? So maybe in the 6th round, he got tired a little bit, and in the 7th, he relaxed a little bit,” said Caicedo about Ortiz. You can’t relax on Deontay. That’s when he takes advantage. Like I said, when you’re in shape, you can take those shots. Luis was definitely hurt, and when he got up, he was in good shape.

“I think in the 5th or 6th rounds, he [Ortiz] got a little bit tired, and went to take a break. I think that’s the round he got caught,” said Caicedo.

When Ortiz got back up, he didn’t look like he was in the condition to continue fighting. Bayless did Ortiz a favor, because Wilder would have been all over him if the action has continued.

Ortiz started dropping his guard in the 6th round, and looked like he was getting tired. However, Ortiz was getting the better of Wilder in the 7th until the last 10 seconds of the round. He just got caught by a punch that he didn’t see from Wilder, and that was it.

“It shows he was in good shape. His [Wilder] chin is probably underrated, yeah,” said Caicedo about Wilder’s punch resistance. “He took some good shots, not super flush, but these were setup shots that probably would have knocked anyone else out. Luis has hit other heavyweights with those shots, and they went out.

“When you set them up the way he did, when you squat and come over, those are shots you really don’t see coming any he managed to withstand them. Nothing respect for Wilder and his preparation. He took it seriously. He’s going to fight Luis 100 times, he’s going to take him seriously 100 times. The game plan was body attack, angles, setup from down to up. Maybe someone else Luis’ size or just a little bit bigger. It’s just the wrong guy,” said Caicedo.

Ortiz landed a lot of good shots in the that Wilder took without any problems. However, he didn’t land a lot of shots overall, as he connected on only 35 punches in the entire fight. A lot of the punches that Ortiz landed were hard ones, but Wilder saw them coming. Ortiz didn’t catch Wilder with a counter like he did in the 7th round of their first fight in 2018.

Ortiz would have got second wind in 7th or 8th

“This was an elite level guy [Wilder], and he’s defended it 10 times,” said Caicedo in talking about Wilder. “So you’ve got to work your head a little bit to work your way into a knockout, and that’s what we were doing. I’m sure he [Ortiz] would have caught his second wind in the 7th or 8th and had no issues, but it’s unfortunate.

It’s possible that Ortiz could have gotten his second wind in the 8th round, but we’ll never know because the referee never let him have the chance. It would have been a minor miracle for Ortiz to make it out of the 7th round without getting dropped a second time, because he was in bad shape after the knockdown.

It was interesting that Ortiz had the crowd on his side rather than Wilder. A lot of Ortiz’s boxing fans must have traveled to see him. That’s the only explanation this writer can come up with to explain why he had more fans at ringside.

“If in fact Deontay unifies it, and it doesn’t take another three years to do so, you never know said Caicedo. They may free up the IBF, a version of so many titles. There’s four titles. It’s possible,” said German when asked if Ortiz can win a title. “We’ve talked about it. If it can happen in the next year, year and a half or 2 years, yeah, he can still do it.

“He’s 40, but trust me when I tell you, what he’s doing in the gym, and what he’s doing on the track, he’s doing what 30-year-olds [are doing], if not outdoing them. It’s just that the cameras aren’t there to capture that, but I see it. I wouldn’t be standing here before you trying to sell you a bag of goods if I didn’t think that we could do what we did for 12 rounds,” said Caicedo.

It’s possible that Ortiz is outraining younger fighters, because he’s an incredible athlete with superb technical skills. The problem that Ortiz has is his punch resistance wasn’t as good as it needs to be to take the punches from Wilder. If Ortiz wants to fight the loser of the Ruiz vs. Joshua fight, he’s going to need a better chin than what he’s shown. 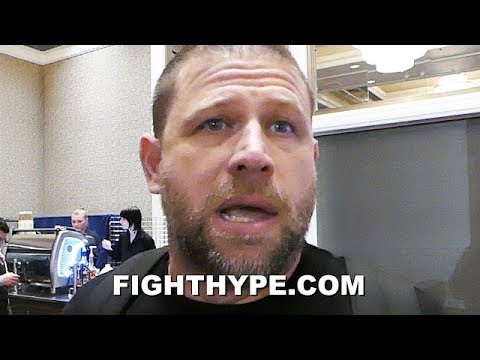 Ortiz would fight Usyk if it’s for big money

“If it’s a big fight, if it’s a money fight, but I think [Oleksandr] Usyk needs to prove himself a little bit in the heavyweight division first,” said Caicedo when asked if he would like to see Ortiz fight Usyk. “He [Usyk] was a great cruiserweight, but he’s got to do something at heavyweight first before he gets in with the likes of the bigger guys. He [Ortiz] didn’t even see it,” said Caicedo about the knockout punch in the 7th.

“I think he kind of slipped to check one of the wild ones that Wilder likes to throw, and then it came right in and he didn’t even see it. You can’t defend it if you don’t see it. The count? Listen, the ref, you can’t blame him, you know what I mean? He probably thought in his head, ‘I have no clue what time it is. Wilder could come in and do a lot of damage. Let me stop it now.’

“That’s A. But B, he knew that the hammer had hit, and there as maybe eight or seven seconds left. Give the two guys that deserve a shot to finish it definitively, but he got up. So it could go both ways. I understand both. I prefer the second, you know?” said Caicedo.

Ortiz won’t get a fight against Usyk, because the former unified cruiserweight champion’s promoter Hearn isn’t going to put him in with Ortiz and watch him get knocked out. Usyk didn’t look good in his fight against Chazz Witherspoon last October, and it appears he’s too weak and small for the weight class.

Hughie Fury will get world title shot in 2020 says trainer »