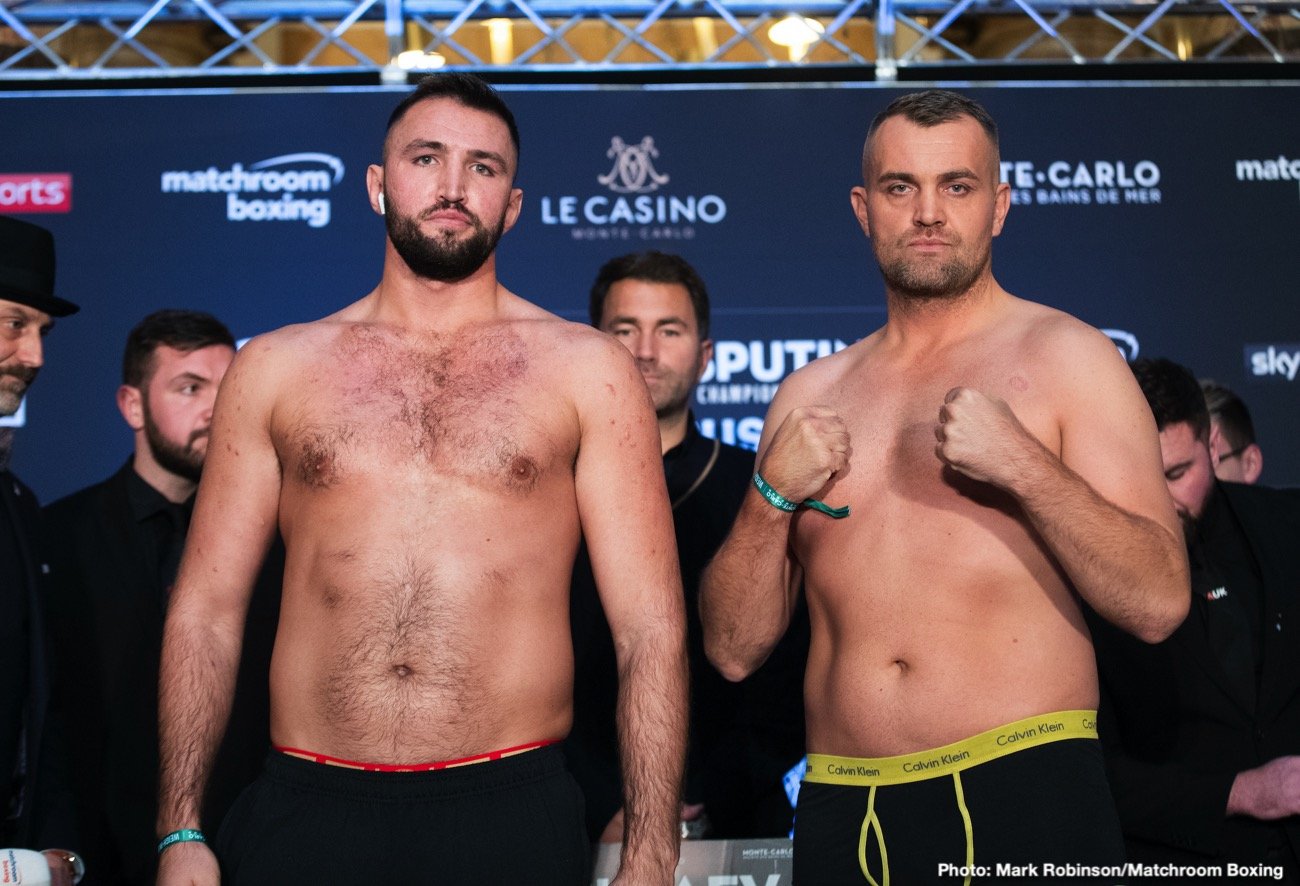 By Robert Addams: Heavyweight Hughie Fury weighed in at 234 pounds at Friday’s weigh-in for his 10 round fight against Pavel Sour this Saturday night on Sky Sports Action at the Casino de Monte Carlo Salle Medecin, in Monte Carlo.

For the 25-year-old Hughie, who is the cousin of lineal heavyweight champion Tyson Fury, this is a gain of 10 lbs from the 224 lbs that he weighed in for his last contest against Alexander Povetkin on August 31. Hughie (23-3, 13 KOs) lost that fight by a 12 round unanimous decision, and it wasn’t competitive.

Hughie is the favorite to defeat Sour, but this isn’t a world class opponent that he’s facing. They’re putting Hughie in a showcase fight to boost his confidence after his loss to Povetkin. Hughie needs a victory something fierce, and he can’t afford another defeat right now if he wants to fight for a world title in 2020.

Fury has fixed the flaws in his game

Hughie and his trainer/father Peter Fury insist that the flaws in his game, namely a lack of power, have been fixed, and he’ll be a different animal in this fight with Sour than he was in his 3 past defeats. Fury has been a professional since 2013, and his lack of power has plagued him since day one. They’ve been working on it continuously, but like his cousin Tyson Fury, he’s never been able to make progress in this area.

Sour weighed in at 240 lbs, which is about normal for him.

The 6’6″ Hughie can get a lot of attention on him this Saturday night if he destroys Sour, since he needs to have the focus on him if he wants to be considered for a world title shot in 2020. His dad Peter says he’ll be fighting for a world title next year, but there are huge doubts that’s going to happen.

Is it too late for Hughie to develop his man strength?

At some point, Hughie and Peter will need to realize that this is as good as it gets. In other words, Hughie isn’t going to one day FINALLY develop his “man strength” that they’ve been talking about for the last six years.

If the power isn’t there by this time for the 25-year-old Fury, then it’s never going to be there. Most heavyweights have shown their power by that age. Anthony Joshua, Mike Tyson, Lennox Lewis and Deontay Wilder were also MONSTROUS punchers by age 25.

They weren’t trying to find power at that age. For Hughie, he needs to forget about useless quest in search of punching power, and instead focus on improving his boxing skills.

If Hughie is luckky, he’ll get a title shot against the winner of the Anthony Joshua vs. Andy Ruiz Jr. rematch, and wind being set for life with the money he gets from that fight. If Hughie loses, then he loses that fight, but he would get a big payday in the process.