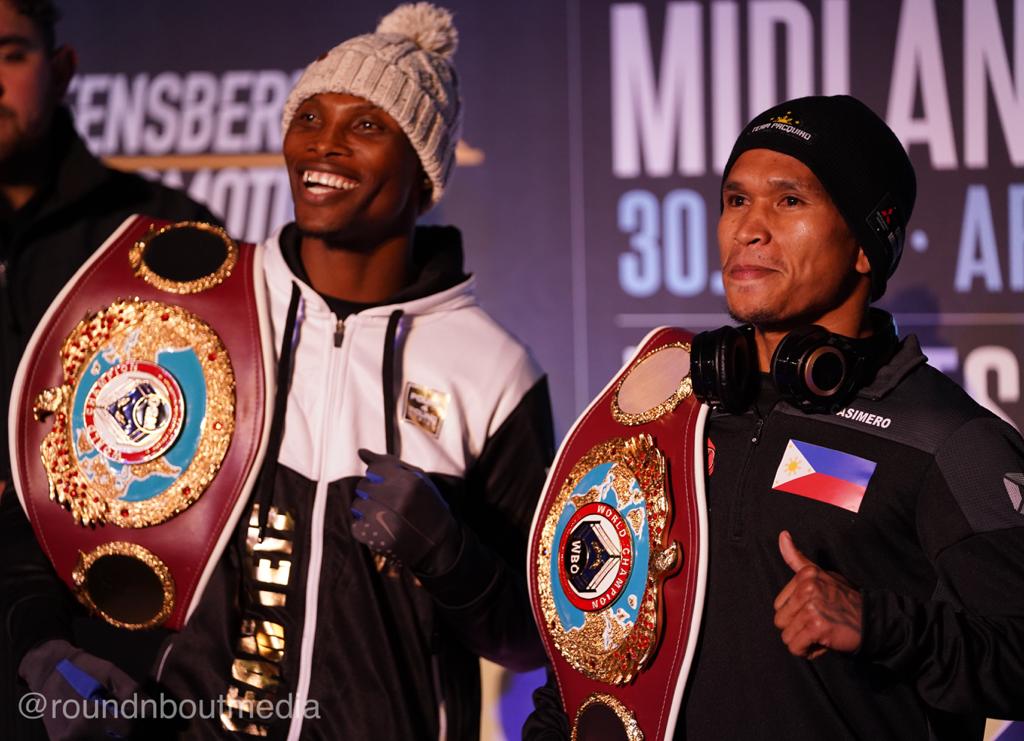 By Chris Williams: WBO bantamweight champion Zolani Tete (28-3, 21 KOs) will be defending against interim WBO champion John Riel Casimero (28-4, 19 KOs) at the Arena Birmingham, in Birmingham, England. The Tete vs. Casimero fight will be shown on ESPN+ in the U.S.

This will be the 31-year-old Tetes’s fourth defense of his World Boxing Organization 118-lb title that he picked up in 2017. Tete hasn’t fought anyone good yet since he won the belt, but that could change if he defeats former two division world champion Casimero on Saturday. Tete wants to fight IBF/WBA champion Naoya Inoue in 2020, and there’s a good chance that fight will happen. Inoue wants to unify the 118-lb division, and Tete has a title that he wants.

Tete shouldn’t have any problems beating the 30-year-old Casimero. That guy is a decent fighter, but he’s beaten repeatedly lesser fighters than Tete. He was schooled by Jonas Sultan two years ago in 2017, and that was the last time Casimero fought a good opponents. He’s been facing soft jobs in the last 2 years since his loss to Sultan.  Casimero also been beaten by Amnat Ruenroeng, Moruti Mthalane and Ramon Garcia Hirales.  For the most part, Casimero has lost every time he’s stepped up against good opposition, and that’s sad. He beats the easy guys, but he then falls apart when hes in with good fighters.

“The preparations went really well. We’ve been preparing for this fight for almost 3 months now,” said Tete to Boxing Social about his fight against Casimero. “We had to make sure there were no injuries. So coming into this fight, we are very sharp, and very ready, and we can’t wait to get to the fight.

“The injury is not there, and the shoulder is 100 percent,” said Tete. “We are just looking forward to the fight. We know Casimero is a good fighter, and a former two-time world champion. And of course, he can punch. It’s going to be a good fight come Saturday night, but on that night, I’ll be victorious. Casimero will go back home, and I will retain my world title.

“We’re prepared for the full 12 rounds, and we’re fighting a guy that is also prepared to win the fight. So we’ll see what happens on the fight night. I’ll never put pressure on myself. I’ll perform the way I want to perform, and I’ll definitely win the fight on my own terms. The pressure is not for me. It’s for someone else. Mine is to just step inside the ring and win,” said Tete.

Poor Tete had to pull out of the World Boxing Super Series tournament this year after he suffered a shoulder injury. He was supposed to face Nonito Donaire. That was a missed opportunity for Tete, because if he’d beaten Donaire, he would have faced ‘The Monster’ Inoue. Tete could have become a star overnight in 2020. Instead, he’s facing guy that has been exposed repeatedly in Casimero. It’s not nearly as interesting for the boxing public, considering he’s not facing guys they want to see him with.

“It was very hectic to pull out of the fight, especially a few days before the unification,” Tete said. “Something good is still coming for myself. That was a good fight, and one of the best fights the world could ever see,” said Tete about the Naoya Inoue vs. Nonito Donaire fight. “Both guys were throwing bombs at each other, and they wanted to cut their heads off.

“They gave us a good fight, and that’s one of the best fights. Definitely,” said Tete when asked if he thinks he’ll fight Inoue next year. “I’ll have to make sure of this fight, and that fight I’m hoping will happen early next year. Once I win against Casimero, then we’ll start talking about the Naoya Inoue fight.

“I think I can win Inoue, and I think I can control the fight in my own ways and own terms, and definitely win the fight. After the fight, I’ll have to step outside and enjoy myself,” said Tete.

Inoue is definitely a possibility, but there’s a chance that Tete might not get that fight. If he looks too good in beating Casimero, then Inoue might side step him. Inoue didn’t seem at all eager to face Luis Nery, and he was one of the first to dump on him when he failed to make weight for his fight against Emmanuel Rodriguez.

Nery only came in one pound over the limit at 119, but that was enough for Inoue say he should be banned by boxing. That tells me that Inoue didn’t fancy a fight with Nery. Tete could find himself in the same position Nery is in if he looks too good beating Casimero.

“I’m always rooting for Anthony Joshua, and I’m hoping he retains his title. If I were to see him, I’d say, ‘Champ, go and get the titles. We’re supporting you in South Africa, and we’re looking forward to seeing you having your belts with you once again,” said Tete.

It’s unclear whether Tete is picking Joshua and Fury to win because they’re from the UK rather than him believing they’ve got the talent to win. Unfortunately, there’s a good chance that both Fury and Joshua will be knocked out in their upcoming fights.

Fury is a good fighter, but Wilder has his number, and knows how to beat him. The 6’9″ Fury was like the Rubik’s cube for the first eight rounds against Wilder, but he discovered that he’s vulnerable to straight punches, he dropped him again and again. That’s something that Fury can’t fix.

As far as Joshua goes, his stamina is horrible, and his chin is weak, and he can’t take a punch. Ruiz will likely beat him easier than he did last June.