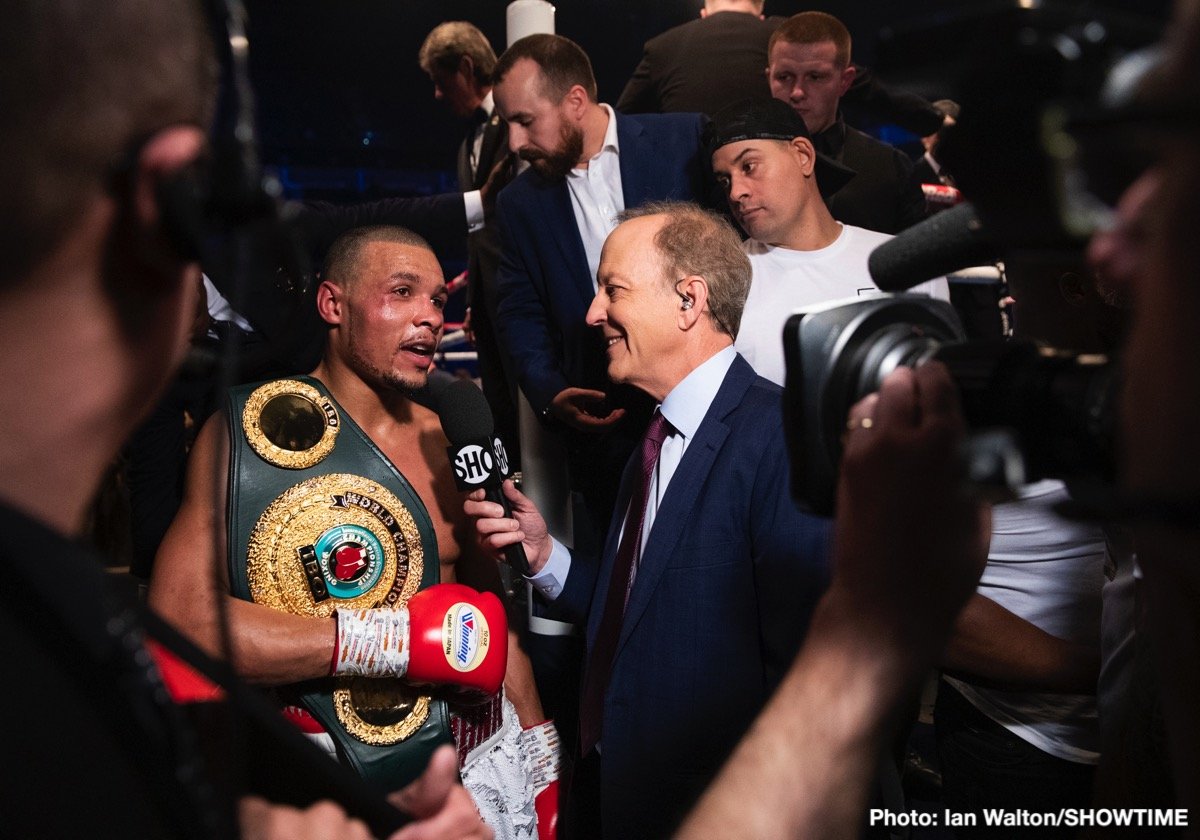 The 6’0″ Charlo is basically a super middleweight in size, and he could be a problem for Eubank Jr. to deal with. Charlo was exposed by Korobov last December, but he’s a big guy with far better boxing skills and experience than him. Charlo looked lost against Korobov, but he might not have the same experience against Eubank.

Charlo (29-0, 21 KOs) is defending his WBC 160-lb title against former junior middleweight title challenger Dennis Hogan (28-2-1, 7 KOs) in the main event on that card. The 34-year-old Hogan is coming off of a controversial 12 round draw against WBO junior middleweight champion Jaime Munguia on April 13 in Monterrey, Mexico.

“Matt Korobov,  very experienced, and we have the same record, 28-2,” said Eubank Jr. to Showtime Boxing last Friday night. “I believe he beat [Jermall] Charlo in the fight that he had with him last year. I’m going to come out here, and stop him and make a real statement out here in America.

“That is the goal [to fight Charlo]. We’re [Eubank Jr. vs. Korobov] co-main event. It’s definitely a fight that can be built. I believe I’m a far superior fighter than that man, and I’m sure I’ll be able to showcase my skills against him in the next six months,” said Eubank Jr.

Korobov might wreck Eubank’s plans by beating him on December 7th. The Russian fighter has looked impressive recently in his fights against Jermall and Immanuwel Aleem. Although Korobov didn’t get a win in either of those fights, the boxing public saw him deserving of a victory. Korobov lost a controversial 12 round unanimous decision to Charlo on December 22 last year at the Barclays Center in Brooklyn, New York. Charlo looked like he was over-matched in that fight, and the perception from many boxing fans is he was given a gift decision based on his A-side status.

In Korobov’s last fight against Aleem, the judges scored it as a 10 round draw. The judges initially had the fight a 10 majority decision win for Korobov, but then they changed the results to a draw moments later. This was an unpopular move by the fans, who booed loudly. Although this was home fight for Aleem, the fans didn’t agree that he deserved a draw.

Eubank moving back down to 160

“I went over to England and obviously built my fan base and record over there, and had some massive fights, big wins and built my name up,” said Eubank Jr. to Showtime Boxing. “I’m IBO super middleweight champion, but now I feel like I need to come down to my natural weight, which is middleweight. Now I’m coming over to the States to take over. This is the perfect opportunity. I’m in the prime of my life, and I can’t wait to get out there to show you what I’m made of. I’ve never been a natural super middleweight.

In all my fights in the last two or three years, I’ve been having breakfast before the weigh-ins to make 168. I’m naturally a 160-pounder. So I’m happy to be back down at my natural weight, and not fighting guys much bigger than me. I think that’s going to really shine through in my performances. All action,” said Eubank Jr. when asked what Showtime viewers can expect to see from him. “I can’t be stopped. I’m not one of these fighters who’s happy with coasting. I’m looking to stop a guy each and every time I go out in the ring no matter who it is,” said Eubank Jr.

The writing was on the wall that Eubank Jr. needed to move back down to 160 after his 12 round decision loss to George Groves in February 2018. Eubank Jr. didn’t have the size to match-up in that fight, and would have gotten worse if he’d stayed in the division.

.@ChrisEubankJr talks to #ShoBox analyst @SteveFarhood about coming to 🇺🇸 to takeover. #EubankKorobov 12.7 for the Interim WBA Middleweight Title on @showtime. pic.twitter.com/f6FQqXK7Hb