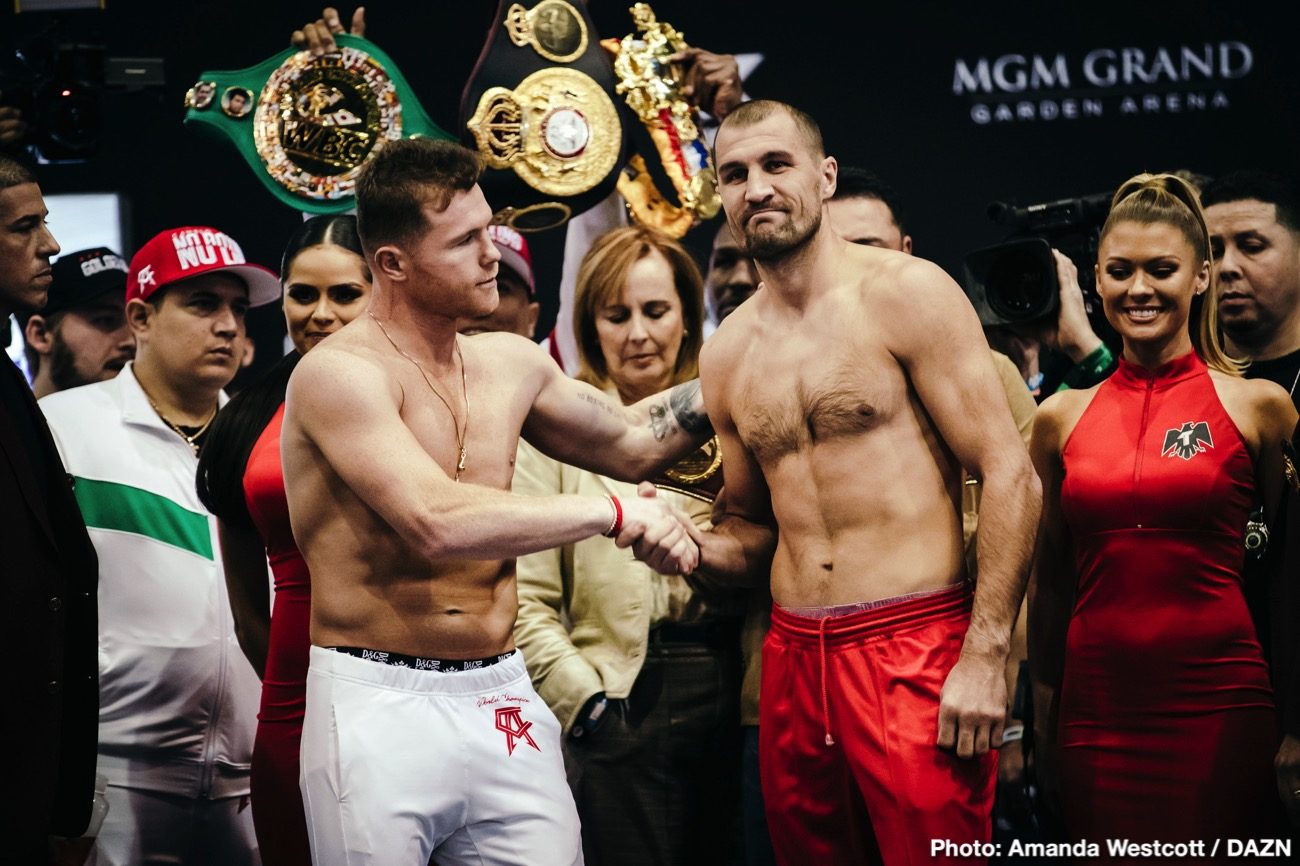 Morales, who captured four division world titles during his 19-year pro career, notes that Canelo has fought a lot of old guys passed their prime. Some boxing fans believe that Canelo has purposefully selected older guys to fight to pad his record, and avoid losses.

Erik notes that WBO light heavyweight champion Kovalev (34-3-1, 29 KOs) is obviously bigger and stronger than Canelo, but he also views the Russian fighter as “already very damaged,” according to ESPN Deportes.

Morales didn’t point out the reportedly rehydration clause that Canelo has for tonight’s Kovalev fight, which limits their rehydrated weight to 185 lbs for the secondary weigh-in on Saturday morning. Erik also didn’t discuss Canelo’s use of catch-weights for a large number of his fights since 2013.

Canelo (52-1-2, 35 KOs) will be challenging Kovalev for his World Boxing Organization 175-lb title on Saturday night LIVE on DAZN from the MGM Grand Garden Arena in Las Vegas.

Yes [Kovalev] is bigger, yes he is stronger and the people of Mexico don’t know Kovalev,” said Morales to ESPN Deportes.  “I can say that he is bigger, stronger and that he is a world champion and has attributes. But Kovalev is already very damaged. [Canelo] has fought with big names when they are at the end of their career.

These are the OLD guys that Canelo has fought during his career:

Those are obviously an old group of fighters right there. Most of them are former world champions. Ryan Rhodes is the only guy from the list that never won a world title, but he was old at 35 when Canelo fought him.

Morales also didn’t mention the many fights Canelo has had against fighters that weren’t old, but they were no longer at their best. You can include these fighters in that group of guys that were merely over-the-hill but NOT old when Canelo fought them:

All of those fighters were no longer at their best when Canelo fought them. The question is, did Canelo make the decision to fight them all based on them being shot or did he choose them because they were recognizable names with the boxing public? It’s really hard to say for sure.

Did Canelo choose guys based on their popularity?

It takes a long time for a fighter to build up his popularity with the fans, and sometimes they do that, they’re no longer in their prime. The above mentioned fighters had very little staying power in the sport for one reason or another.

All we know is Canelo chose to fight them despite the fact they were no longer fighting at a high level. The fights made business sense because all of those guys were fighters that the boxing public knew about.

“It seems that Canelo’s fights, throughout his career, are not taken into account at 100 percent,” said Morales. “People and I had hoped that the fight against GGG would have taken place and instead they choose an opponent [Kovalev], who for many is already old, and won’t present real competition,” said Morales.

DAZN and boxing fans were hoping Canelo was going to agree to fight a trilogy match against Golovkin last September, but he chose to fight Kovalev in November. Canelo made an unusual move by not fighting on the Mexican holiday in September, and instead waiting until November.

These are the top fighters Erik Morales fought during his career:

It’s plain to see that Morales didn’t take it easy in cherry picking opponents during his career. Even at the end of his career, Morales was fighting the best in taking on Danny Garcia. Morales didn’t pick out the weakest link in facing Garcia, as he was facing the best light welterweight. If Morales could have gotten a fight against Floyd Mayweather Jr., he surely would have taken it.

Will Canelo get credit for winning his 4th division world title?

The big question is whether the boxing public will give Canelo the credit that he so badly craves if he succeeds in beating Kovalev to become a four division world champion. Given that Canelo has picked the oldest and arguably the weakest of the light heavyweight champions in Kovalev to try and win his 4th division title, it kind of taints what he’s trying to do.

In a perfect world, Canelo would have chosen to fight IBF/WBC light heavyweight champion Artur Beterbiev for his fourth division world title. No one have given Canelo any grief if he’d selected Beterbiev to fight for a world title at 175. Unfortunately, Canelo chose 36-year-old Kovalev, who has a 4-3 record in his last 7 contests.

What made Canelo look even worse this week is when his trainer Eddy Reynoso piped up and claimed that Kovalev is BETTER than Beterbiev. Reynoso came off looking silly, and out of touch.