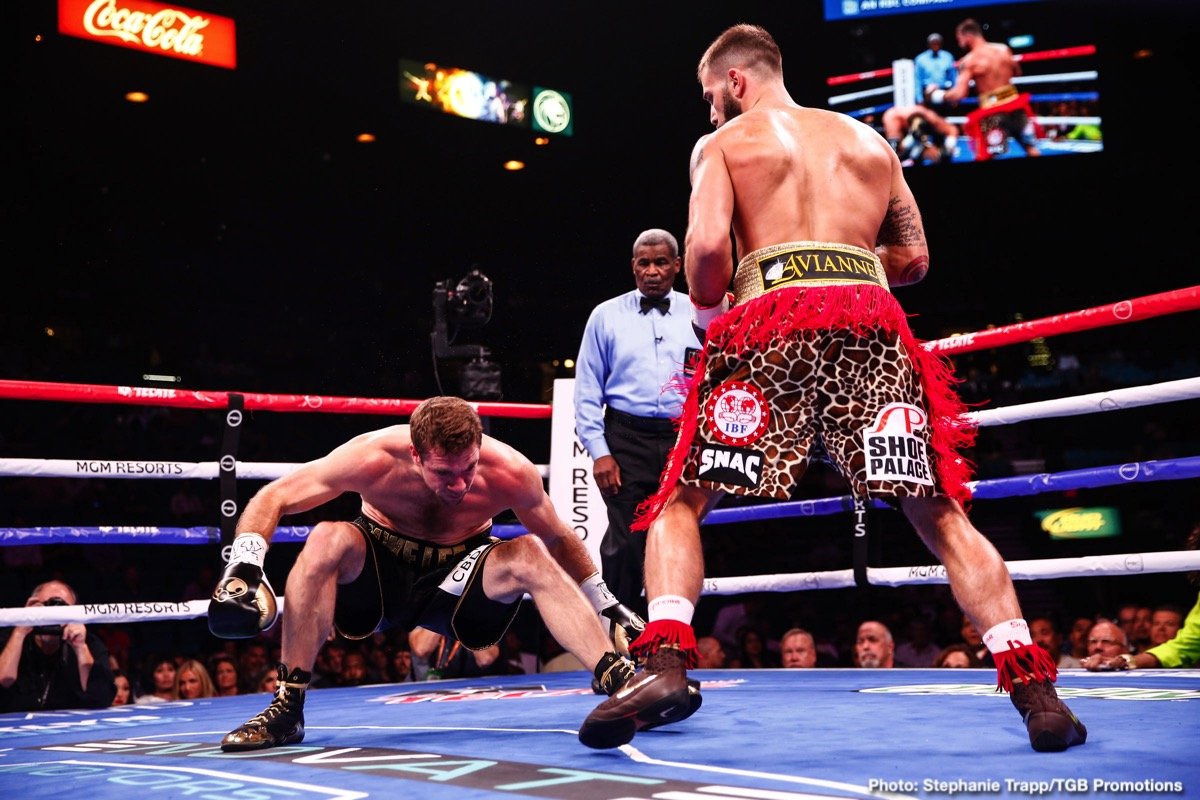 By Kenneth Friedman: Caleb Plant is expected to make his next defense of his IBF super middleweight title against #11 IBF Alfredo Angulo early next year on February 15, according to @MikeCoppinger. It’s still not official yet, but the fight is in the works.

The highly talented Plant, 27, is slowly being developed into a star by Premier Boxing Champions. He looked great in his first title defense of his IBF belt in stopping previously unbeaten Mike Lee (21-1, 11 KOs) in the third round on July 20 in Las Vegas, Nevada.

This will be another voluntary defense for Plant, Angulo is a fringe contender right now. This obviously isn’t the type of opponent that boxing fans want to see Plant defending his IBF title against, but there’s not a lot of great options for him.

The IBF’s rankings are mostly filled with guys that aren’t high level fighters. Arguably the best of the bunch in the IBF’s top 15 at 168 is Chris Eubank Jr. and Caleb Truax. Those are fights that could come in time for Plant, but not right now.

Plant made short work of a solid fighter in Lee, who had moved down from light heavyweight to challenge him. Caleb dropped Lee once in round one, and three times in round 3 before the contest was stopped by referee Robert Byrd at the 1:29 mark.

The fight showed that Plant’s punching power is a lot better than what many boxing fans think. Before this fight, the 32-year-old Lee had never been knocked down in his nine-year professional career, but Plant dropped him 4 times.

Nashville, Tennessee native Plant captured the IBF 168-lb title earlier this year in defeating the hard-hitting Jose Uzcategui by a 12 round unanimous decision on January 13.

In the lead up to that fight, many boxing fans were picking Uzcategui to beat Plant, but it wasn’t even competitive. Plant showed that he was a class above in out-boxing Uzcategui to capture the IBF belt.

Alfredo Angulo has turned his career around

Angulo (26-7, 21 KOs) recently pulled out an impressive victory over former WBO middleweight champion Peter Quillin in beating him by a 10 round split decision on September 21.

The 2004 Olympian Angulo wore the 36-year-old Quillin (34-2-1, 23 KOs) down with pressure to capture the victory in Bakersfield, California. The scores were 96-94, 96-94 for Angulo, and 96-94 for Quillin. It was an interesting fight with both guys looking good at times, but Angulo’s power carried him to victory down the stretch.

While it’s true that Quillin is no longer the same fighter he was in his prime seven years ago, he’s still a big puncher. One can’t lessen Angulo’s accomplishment by saying that Quillin is over-the-hill at this point in his career, because he’s still an excellent fighter.

Angulo has fought a lot of different guys during his 14-year professional career, and he’s well known with the hardcore boxing fans worldwide. That’s one of the advantages of Plant defending against him. This gives Plant an opponent that the casual fans would recognize.

Here’s a list of some of the fighters Angulo has fought over the years:

When you make a name for yourself in this sport you’re only ONE big win away from another BIG opportunity.

“Everybody knows I want the fight against David Benavidez, but in his last fight, he showed he’s got a lot of flaws in his game,” said Plant to Fighthype. “That’s something I’ve seen for a while, and I think it’s a fight that kind of put it out in the open for everyone else to see. But that’s a big fight for boxing, and I’m sure we’ll get to it as soon as they’re ready for it. I wasn’t shocked,” said Plant about how Benavidez struggled against Anthony Dirrell in his last fight.

“You’ve got a guy that was basically boxing him up for half a fight, but that’s a guy that is older, and been in a lot of tough fights. He’s basically on his way out. He’s suffered terrible cuts over his eyes in 2 out of the last 3 fights. So it was pretty inevitable what was going to happen, happened. But I feel like if you put someone like me in there, it’s a different story [against Benavidez].

“There’s a chance he may get his a– whooped there,” said Plant about Saul Canelo Alvarez fighting at super middleweight. “I think he’s a crafty fighter. There’s very few fighters in this game that I’m a fan of with boxing ability. I would say I’m a fan of not necessarily him, but of his boxing ability. But I’m ready to go to war with whoever. I’m going to continue to work hard on the grind. I’m 11 pounds away right now at 179, but in due time. That’s all,” said Plant.

WBC super middleweight champion David Benavidez vs. Plant is an excellent uification fight for the future. If both guys can keep winning, this will be a huge match-up in a year or two.