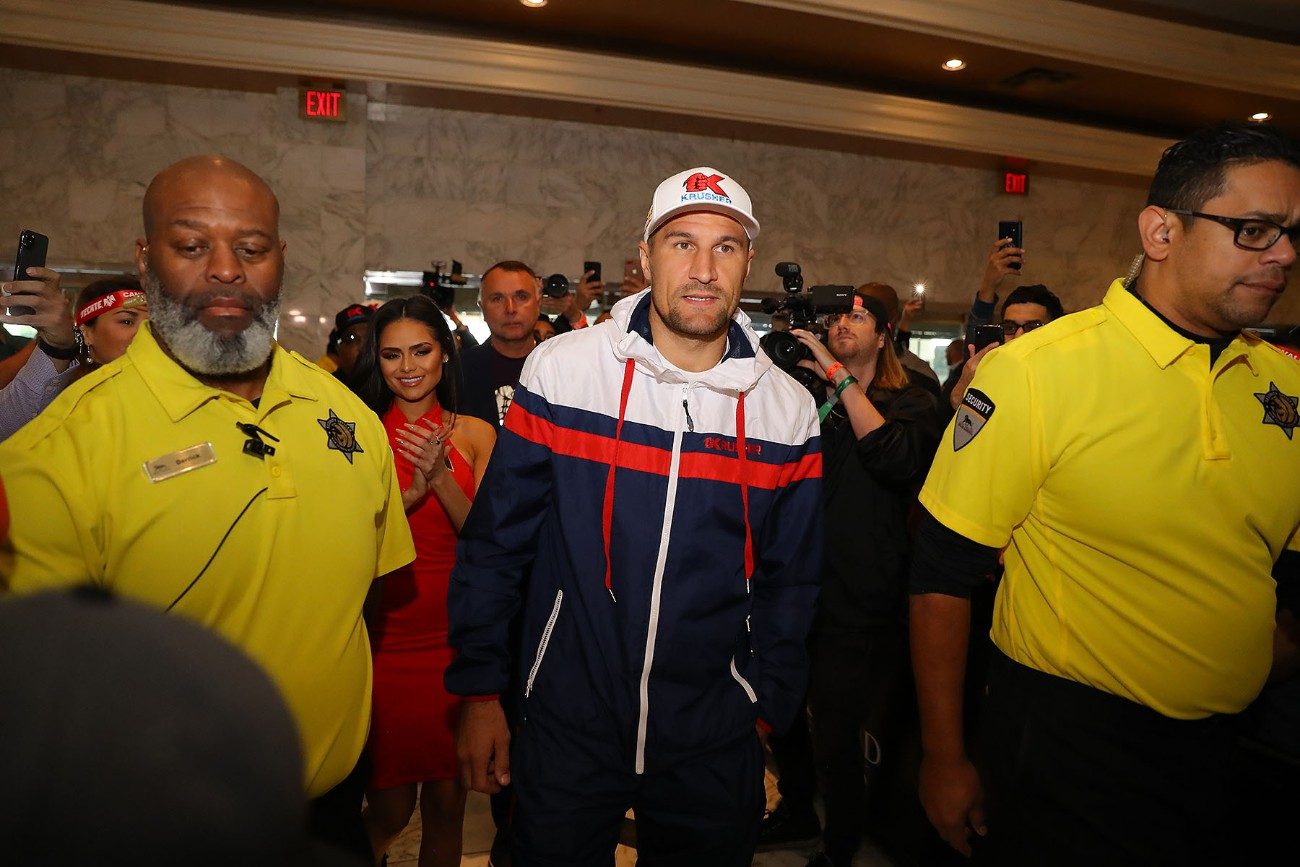 By Sean Jones: WBO light heavyweight champion Sergey Kovalev isn’t worried about the much talked about body attack from Saul Canelo Alvarez for their contest this Saturday night. During a session with the media on Tuesday in Las Vegas, Kovalev (34-3-1, 29 KOs) laughed off the talk of Canelo Alvarez (52-1-2, 35 KOs) attacking him to the body to knock him out.

The six-foot Kovalev put his hands in the air to show the difference in his height and the much shorter 5’8″ Canelo, and made it clear that he’s not worried in the slightest about him.

The fight that Kovalev really wants is a unification match against IBF/WBC light heavyweight champion Artur Beterbiev. Kovalev says he doesn’t view Beterbiev as better than him. In explaining why Canelo chose him instead of Beterbiev, Kovalev said that the Mexican star had to face him because he’s the top fighter at 175.

Obviously, this isn’t what the boxing public believes. They view Beterbiev as #1, and Kovalev at #4. Many fans rate the top light heavyweights as follows:

Canelo’s body attack will be neutralized by Kovalev

“We’ll show on Saturday,” said Kovalev to Fighthype when asked how he’ll deal with Canelo Alvarez’s body attack. “I can say right now all my plans for what I’m going to do. Why to fight on Saturday if I explain it right now? I will try to show everything what we worked [on] in my training camp, we will try to show this Saturday.

“I understand that he’s going to body punch, but it’s difficult [the 6’0″ Kovalev holds up his hands to show the height difference between him and the 5’8″ Canelo,” said Kovalev.

It’s going to be difficult for Kovalev to keep Canelo off of him for the entire fight, because he’s been training hard to deal with his size. Kovalev does move well for a light heavyweight, but he’s not going to be able to keep the persistent Canelo Alvarez off for 12 rounds. For Kovalev to win this fight, it’ll require him to throw three and four-punch combinations to make Canelo hesitant to attack him.

Throwing single power shots and jabs won’t be enough for Kovalev to keep Canelo off of him, given that he’ll make him miss with those shots. By Kovalev throwing combinations, he’ll land some of those shots, and possibly hurt Canelo. If he doesn’t hurt him, he’ll make him think twice about jumping in to try and land body punches.

“He wants to make history. Who is he going to fight right now at light heavyweight? I’m the best at light heavyweight. I cannot say that [Artur] Beterbiev is better. Yeah, he has two titles. Remember, the IBF title is mine. He got this title with nobody [Enrico Koelling]. I don’t know this guy at all. This title was vacated. This is a big motivation to get victory over Canelo to fight Beterbiev.

Kovalev doesn’t need to be the one that says Beterbiev is better than him, because the boxing public already has. At this point in Kovalev’s career, he’s losing as much as he’s winning. Unlike IBF/WBC light heavyweight champ Beterbiev, Kovalev isn’t unbeaten, and he’s not a two-belt world champion.

Inoue: I will stop Donaire if I see an opening »