By Kenneth Friedman: Former WBA light welterweight champion Regis Prograis has some regrets about not fighting the way he needed to in order to defeat IBF champion Josh Taylor in their recent WBSS tournament final on October 26 in London, England.

Regis says he wants to fight Taylor again after he battles for the undisputed light welterweight championship against WBC/WBO champion Jose Ramirez. Prograis doesn’t care if Taylor loses to Ramirez. He still wants to fight him again.

Prograis thinks he could have fought better

“It’s hurting me a little bit,” said Prograis to IFL TV about his loss to Taylor. “There were a couple of moments in the fight where I had him going, and I could have stepped on the gas.

“There were some moments in the fight that I felt I really could have capitalized on, and those things kind of haunt you when you feel you could have done certain things and you didn’t do them at the time. I definitely want a rematch. I’m going to go do my thing, and talk to my team to see what my next move is. Let him do his thing,” said Prograis.

There’s no question at all about Prograis not using the right game plan for the Taylor fight. The mistakes by Prograis were there to be seen. These are the things Prograis did wrong:

“Hopefully, he gets the Ramirez fight, and after that, it’ll be a rematch,” said Prograis. I still feel I’m the best in the world at 140. And I still feel like even though that was #1 and #2, maybe he’s 1A and I’m 1B. I still feel the same way. It was a close fight that could have gone either way. I thought I won it, but I can’t disagree with the judges. The judges have the final say, and you can’t disagree with them. I actually would come back here to fight.

“I knew that going into it, and I still took the fight. So for me, it’s no excuses or none of that stuff. So for me, I’d definitely come over here and fight him again. The O2 was sold out. That was a huge crowd, and success. We put on a huge show, a fight of the year candidate,” said Prograis.

The boxing public overwhelmingly had Taylor winning the fight. It wasn’t close enough to go either way, as Prograis says. He gave away the middle rounds, and he failed to start early enough with his rally late in the fight.

Taylor and Prograis are destined to fight again

Win or lose, Taylor and Prograis are destined to fight each other again soon. Their fight on October 26 was too close for them not to fight again, and it was well received by the UK boxing fans. Gervonta ‘Tank’ Davis called Taylor out this week for a fight at 140, but that match isn’t likely to happen. Gervonta’s promoters at Mayweather Promotions likely won’t agree to let him move up to light welterweight to face Taylor at this time.

Davis is making his debut at 135 against Yuriorkis Gamboa on December 28. If Davis wins that fight, he’ll be the new WBA lightweight champion. It’s unclear if Davis would move up to 140 to take on Taylor because he needs experience in that weight class.

Prograis reveals what he and Taylor spoke about after fight

We were talking about that. He invited me to Scotland, and he was saying that we just had to be enemies. I told him, ‘Listen, I want to see you fight Ramirez. Whoever wins that fight.’ Whoever wins that fight, I want to see them become undisputed. Once that’s all said and done, me and him can have a rematch. And once we have a rematch, we’ll be enemies again. I told him, ‘we’re friends now, and we’re cool. But after that when we have a rematch, we’ll be enemies all over again,” said Prograis.

The Taylor vs. Ramirez fight still hasn’t been made. WBC/WBO light welterweight champion Ramirez (25-0, 17 KOs) will be defending against World Boxing Council mandatory Viktor Postol next. The two have agreed to terms, and the date and location still need to be decided. That’s going to be a tough fight for Ramirez, as Postol, 35, gave Taylor all he could handle in their match in 2018. Postol (31-2, 12 KOs) doesn’t have the power or the work rate needed though for him to win, but he might catch him with a shot. Postol stopped Lucas Matthysse in the 10th round in October 2015.

It’s not surprising that a lot of boxing fans thought Prograis, 30, did enough to win, because Taylor fell apart in the championship rounds. The combination of Taylor’s injured right eye, and the pressure from Prograis led to an almost total collapse for the Scottish fighter. 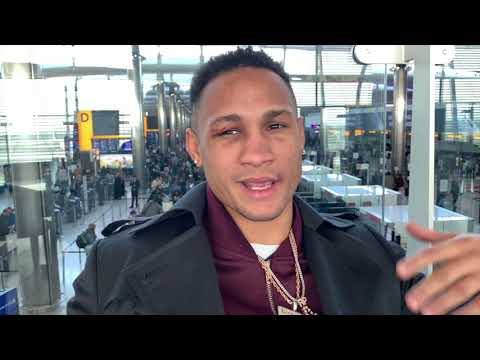