Josh Taylor with excellent options for next fight 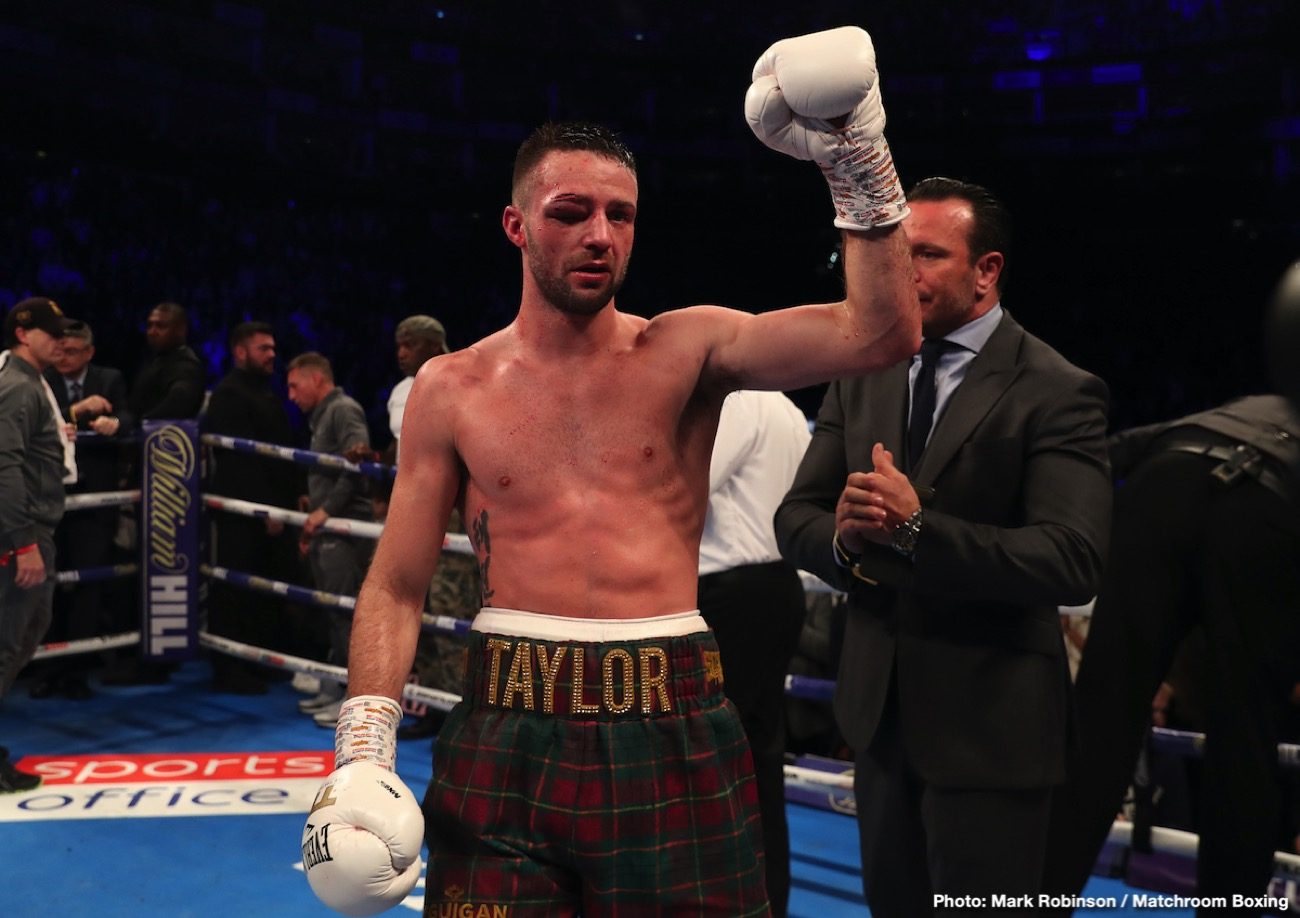 By Robert Adams: Josh Taylor dug deep to win the World Boxing Super Series tournament in beating Regis Prograis by an impressive 12 round majority decision to unify the IBF & WBA light welterweight titles at the O2 Arena in London, UK.

Along with those two belts, Taylor (16-0, 12 KOs) captured the Ring Magazine and the Muhammad Ali Trophy. Just beating Prograis (24-1, 20 KOs) was a HUGE accomplishment all by itself. The stuff that Taylor got in winning the contest is icing on the cake.

Matchroom Boxing promoter Eddie Hearn says he’d like to see Taylor fight either #9 WBA Lewis Ritson or WBC/WBO light welterweight champion Jose Ramirez in his next bout. Fighting Ramirez (25-0, 17 KOs) would be the far bigger match-up for Taylor in terms of boxing, but Ritson (20-1, 12 KOs) would be an interesting match for the UK fans.

Here are some potential options for Taylor’s next fight:

Some of those fighters would be really tough outs for Taylor, especially Matias, Barrios and Ortiz. Ramirez is a good fighter, but not as tough as Matias and Ortiz. Those guys have heavy hands.

Hearn says Taylor vs. Prograis is ‘Fight of the Year’ contender

There’s a lot of competition that the Taylor-Prograis fight is dealing with in terms of The fight of The Year award for 2019. But even if the fight doesn’t receive that honor, it was still an excellent match.

There weren’t enough exciting rounds in the middle of the fight for the Taylor vs. Prograis match to be Fighter of the Year. The fight kind of got boring when Prograis was struggling in rounds 6 through 9.

Taylor can fight Ramirez or Ritson next says Hearn

“Again, he should be a bigger star than he is, but now is a chance for him,” said Hearn about Taylor. “He’d ended up with this platform to go and become a star now. People were watching in America, and talking about it. He’s the World Boxing, and he’s got loads of options.

If Taylor is smart, he’ll let Hearn know that he’s not interested in fighting fringe contender Ritson, and focus instead on the Ramirez fight or one of the top contenders. Right now, Taylor needs to keep the momentum going by facing the elite level contenders or Ramirez. Fighting fringe contenders would be a backwards move for Taylor to where he was before he entered the WBSS tourney.

“I know people will have him as a big favorite in that fight…anything can happen,” said Hearn. “Again, he’s not my fighter, but I’d love to continue working with him, and see what happens. I’m just a fan really. We bought the [Ivan] Baranchyk fight to watch, and we got to promote the final. He’s always in good fights. I remember when he beat Ohara Davis. I’d rather be on his team than against him. It was a big night for Josh Taylor,” said Hearn.

The way that Taylor fought in the WBSS tournament, it’s in Hearn’s best interest to keep working with him. He wants to turn Taylor into a star, but he might need to move up to 147 to accomplish that goal. Taylor doesn’t have enough big name competition at 140 to become a super star. If Taylor chooses to fight guys like Ritson, he’s never going to be a star. He waste time fighting guys that are domestic level or mainly known to UK boxing fans. He’s got  fight guys that are known worldwide.

“It was much too wide,” said Hearn about the 117-112 score by one of the judges for Taylor. “And it was all my fault…just to let everyone now, all three judges were neutral officials. It was no Brits and no Americans. So, I’m really sorry some geezer from Italy. I guess it’s because we have Matchroom Boxing in Italy. It was much too wide for me. You can sometimes get overawed by the noise, and all that stuff. But I had it two rounds for Josh Taylor. I thought he was three up, and I thought I Tweeted, saying, ‘Three rounds to go, Regis need a knockout’ or ‘two rounds to go, Regis needs a knockout.’

“I thought Josh did enough in controlling the majority of the fight, but I thought Regis did really well and finished really well. And by the way, he seemed to accept that. Regis Prograis, by the way, gave a brilliant interview after, where he said, ‘The better man won.’ And he’ll be back. He’s a great fighter.

“I just felt that his tank emptied a bit on the back end of the fight, but then again, he came back and won the last round and looked strong. He looked like if there was another round, Taylor might be in trouble. That’s not really how it works in boxing. It’s only 12 rounds,” said Hearn.

The judge that turned in the 117-112 score for Taylor was the oddball as far as the three scores. Scoring the fight 9 rounds to 3 in Taylor’s favor was way too wide, and looked out of place for the fight that took place.

“I definitely feel like I’ve been in a fight,” said Taylor to Boxing Social. “He was very good. But he never surprised me with anything. I really did think I could get him out of there. He really does have a good chin, because I chin-checked him a few times. A good couple of times flush on the side of the head, and he took them well.

“He’s a tough cookie. I really did think I was going to get him out of there if I caught him with one of those shots, especially the uppercut. But he took them well, yeah.  Similar power [to Ivan Baranchyk], but sharper. His jab was quick but solid. His left hands were solid, and his hooks to the body were solid. He’s definitely a hard puncher. I’ve sparred with middleweights, and his power never surprised me. He definitely did have power,” said Taylor.

Prograis’ power isn’t out of this world. There are other fighters in the light welterweight division that arguably hit harder than him. Pablo Cesar Cano, Vergil Ortiz, Kiryl Relikh and Subriel Matias might have a little more power.

Prograis was hurt in round 6 or 7 says Taylor

“I think I hurt him in the 6th or 7th rounds,” said Taylor.  “I then started walking him down, and neglecting my boxing. He then stole a couple of rounds with the jab and the moving. But I knew I’d won the fight. I felt myself that I’d won it by two or three rounds. Yeah, 100 percent,” said Taylor when asked if he wants to fight Jose Ramirez next. “I want to keep this momentum. So I’ll be back in the gym after Christmas, and then chase that Ramirez fight to become undisputed,” said Taylor.

It did look like Prograis was hurt on a couple of occasions in the middle of the fight, but he was able to recover well. Taylor looked hurt as well in the last two rounds. His right was in bad shape, and he looked he wasn’t able to track the shots from Prograis by the 12th. It’s a good thing for Taylor that this wasn’t the old days when fights were 15 rounds, but he probably wouldn’t have lasted enough three more rounds.

Taylor got away with hitting Prograis after the bell on three occasions in the fight. Normally, a fighter would be docked a point when they’ve committed that foul more than twice, but the referee let Taylor get away with. What was troubling about it was that Prograis had his hands down, and he was hit with shots that was blatantly late. The referee Marcus McDonnell was playing it loose in terms of officiating the fight. You wonder what he would have thought if he was the one taking the shots from Taylor after the bell. 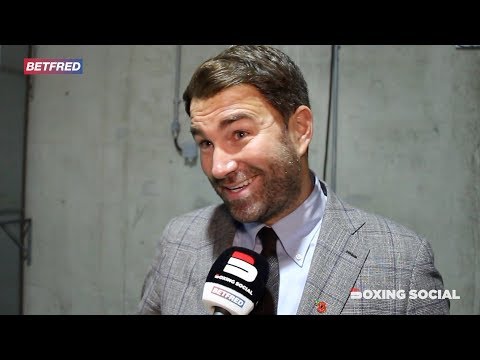