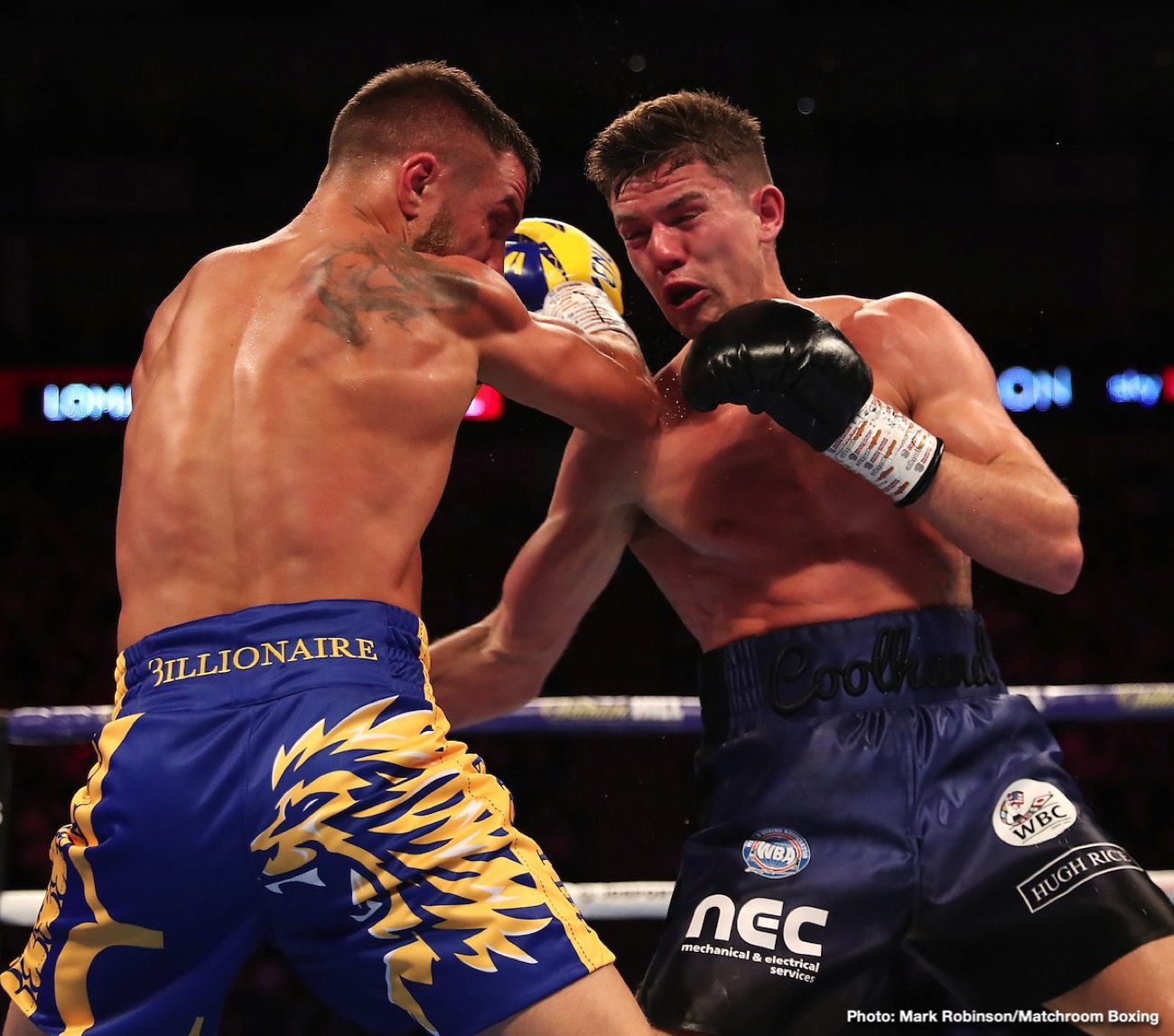 By Barry Holbrook: Luke Campbell isn’t too happy with the World Boxing Council elevating Devin Haney to the new WBC lightweight champion following their decision to give Vasilly Lomachenko their Franchise tag. Campbell (20-3, 16 KOs) says since he was the last guy to fight Lomachenko for his WBC title on August 31, he should have been the one that as elevated to lightweight champion instead of Haney.

Lomachenko beat Campbell by a 12 round unanimous decision by the scores 119-109, 119-108 and 119-108. The fight was a lot more competitive than the scores handed down by the judges. Campbell landed a lot hard shots, and he pushed the 31-year-old Lomachenko (14-1, 10 KO) hard for 12 rounds. That was one of Lomachenko’s toughest fights of his career six-year professional career.

Campbell, 32, says he’ll be returning to the ring later this year, and he hopes to soon be fighting for a world title again. Ideally, Campbell would like to face Lomachenko in a rematch, but that’s not likely. Loma is talking about wanting to move back down to super featherweight if he’s successful in unifying the lightweight division in 2020.

Campbell thinks WBC should have made him champion, NOT Haney

“Someone said put something on Twitter, but I thought if I have nothing good to say, then don’t say nothing at all,” said Campbell to Boxing Social when asked what went through his head after learning that Devin Haney had been elevated to WBC lightweight champion. “He’s not even fought for that title, where me and Lomachenko had a fantastic fight for that title.

Haney then fought Abdullaev for the interim WBC title, and stopped the Russian fighter in the 4th round on September 13. Campbell would likely done the same thing to Abdullaev if it had been him fighting him. Once Haney captured the interim WBC title, the logical move by the sanctioning body was to elevate him to full WBC lightweight champion after they gave Lomachenko the Franchise tag.

Campbell would have been a really tough fight for Abdullaev. It’s unfortunate for Campbell that he wasn’t the one that fought Abdullaev for the vacant WBC title, but Lomachenko spoke up and got his wish. Abdullaev lost to Haney not because of him being afraid. He didn’t have the talent to match-up with him.

“I still believe, I can’t say I’m the best in the division because Lomachenko is still there, but other than Lomachenko, I believe I’ll beat them all,” said Campbell. “And I believe I’m getting better and better now. I can’t wait to get back in the ring, and I don’t think I’ve ever been so excited to get back in the ring. I want to get back out before the end of the year, and we’re looking at December to get out. I’m like a kid around Christmas.

“I can’t wait to get back in the ring. I’m pushing on, and improving on my last performance. And I’m achieving my dreams of being a world champion, and being the best in the division. A couple of more fights down the line, then maybe I’ll be in for a world title. I’d love to have another go at Lomachenko, because I feel like if I have another shot at him, I’d definitely do a lot better than I did,” said Campbell.

Lomachenko isn’t the type to give rematches against guys that he’s already beaten. The only way Campbell gets a fight with Lomachenko now is if he moves down to super featherweight , because that’s where he’s headed in 2020. If Campbell unifies the lightweight division, there’s an outside possibility Lomachenko might look his way. It’s probably not going to happen though.

“I think it’s a tough fight. Commey is a good fighter, and he’s very much underestimated by a lot of people,” said Campbell when asked about his thoughts on the Richard Commey vs. Teofimo Lopez fight. “I think he’s a really good solid fighter. Lopez is on the up. Nobody really knows what he can do. In his last performance, he didn’t look that good. He seemed to be getting hit a lot by an average fighter, who was just tough.

“I think he would definitely need to step his game up against someone like Commey. I think it’s a really interesting fight, and I would probably sway towards Commey at the moment. He has more experience. And he’s shown what he can do, and he’s been in there. We’ll see. Lopez is a great guy. I’m rooting for Lopez, and hopefully Lopez wins,” said Campbell.

Lomachenko is also picking IBF lightweight champion Richard Commey to defeat the 22-year-old Teofimo Lopez. We’ll have to see though. Lopez has the youth, and power to beat Commey. The experience is what Teofimo doesn’t have.

“I’m coming off that performance thinking I can do so much better,” said Campbell to Boxing Social about his loss to Vasiliy Lomachenko. “I am my own worst critic. I am taking positives from the fight obviously. A lot of the rounds were close. He certainly had his moments, and a lot of the rounds were nicked with a little flurry. When I was in there, I didn’t feel like there was much difference between the pair that was in there.

The 2012 Olympic gold medalist Campbell is already one of the best fighters at lightweight. He fought as well as he could against Lomachenko, but lost to the better man. Campbell fought well in round one, but Lomachenko came back to almost drop him in the 5th. In rounds six through ten, Campbell was competitive with Lomachenko. However in the 11th, Lomachenko dropped Campbell after hurting him with body shots. Campbell got back up and made it through the round.