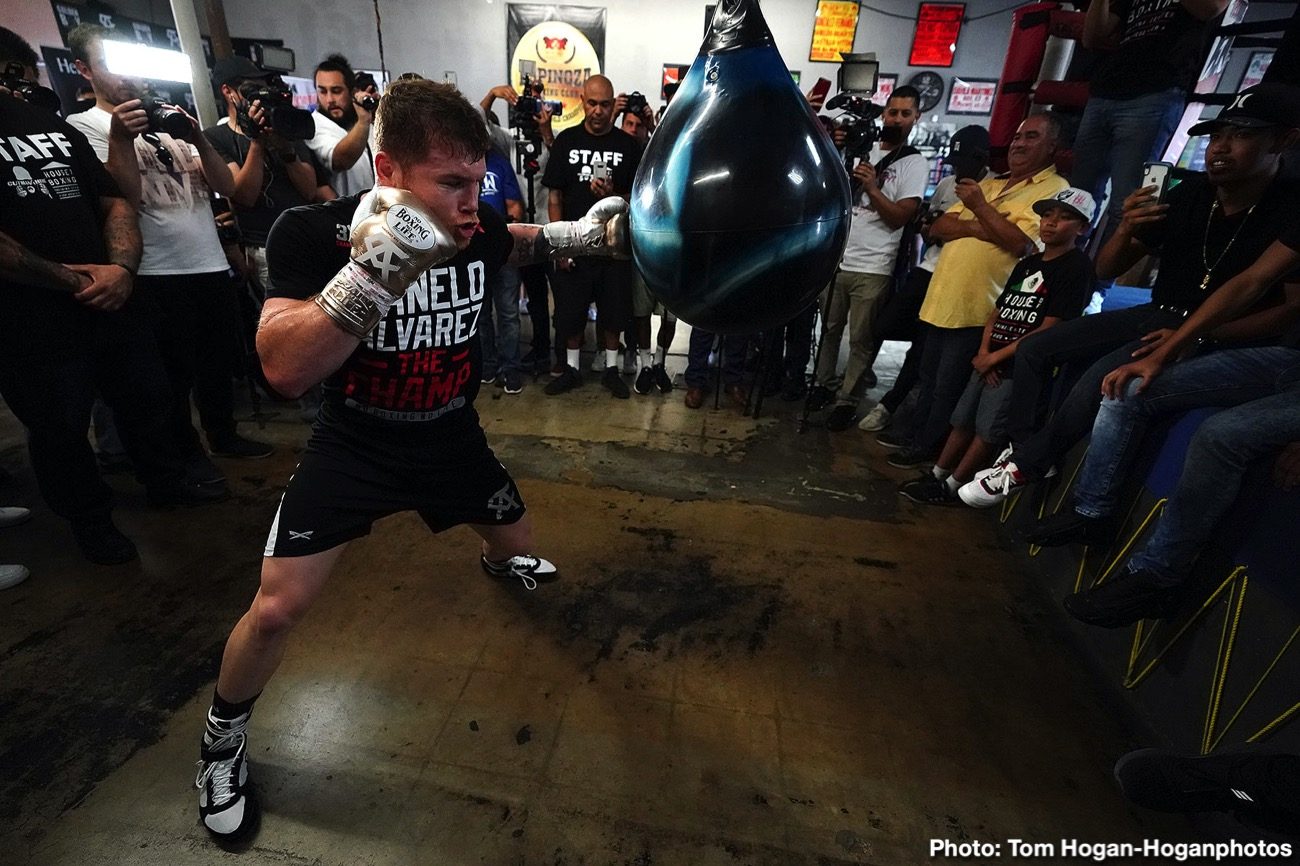 By Dan Ambrose: Trainer Angel Garcia says Saul Canelo Alvarez is looking sluggish with the extra bulk that he’s added to challenge WBO 175-lb champion Sergey Kovalev next weekend on November 2 on DAZN . Angel doesn’t think it’s a good idea for Canelo Alvarez (52-1-2, 35 KOs) to be bulking up to mess with the big boys at light heavyweight. Angel thinks Canelo is looking too muscular and slow with the size he’s packed on for the fight.

Angel points out that Kovalev will likely be in the 190s by fight time, and he’s accustomed to carrying this weight. Unlike Canelo, Kovalev can carry 190+ pounds on his 6-foot frame without it tiring him. Although it’s believed that Canelo will attack Kovalev to the body, Angel sees that as a risky thing. He’s going to get hit when he attacks Kovalev on the inside.

Angel wonders whether Canelo will be able to carry the extra weight that he’s packed onto his short 5’8″ frame. Moreover, he wonders how Canelo will deal with fighting a guy that is in the 190s, and punches hard.

Canelo looking sluggish with too much muscle

“I like Canelo, and like him as a fighter,” said trainer Angel Garcia to Fighthype. “I don’t know what they’re trying to do to him. Is he going to have a life after this s—? For real. Remember he’s sparring big guys too. He’s looking a little sluggish with too much muscle. You’re talking 178, but these guys come in at 190 and 195,” said Angel about the light heavyweights. “They’re like heavyweights. Those are big f—– guys. What is he going to come at? 190 at his height? Remember, he’s going to weigh in at 178.

“He’s going to eat that night, recover, and he’s going to be at 190, bro. For his size, will he be able to handle that weight? Pushing that weight around. Kovalev is a big guy. He’s comfortable there. I’m not saying Canelo can’t be comfortable. I’m just saying, ‘why? He’s got all the belts. Why does he need more belts? Is it going to make him better? How about your mind and your brain?” said Angel about Canelo.

Canelo hasn’t said what his plans are after his fight with Kovalev fight. His trainer Eddy Reynoso rattled off a list of potential fights for Canelo for May of 2020. One of those names is IBF/WBC light heavyweight champion Artur Beterbiev. Canelo says he’s going to wait and see how he looks against Kovalev before he decides what his next move is.

This is the list of fighters that Reynoso mentioned for Canelo’s next fight in May:

“That’s like me taking Danny [Garcia] to 154, and then taking him to middleweight right now. He [Canelo] only had one fight at 168. You remember who he fought, Canelo. He fought that kid [Rocky Fielding] from Europe. At 168, he destroyed him in one round. Now you’re going to 178,” said Garcia in talking about Canelo taking risky fight.

Kovalev could be a hard fight for Canelo, as he hasn’t fought anyone at 175 yet. This will be Canelo’s first fight in the weight class. Although Canelo fought once at 168, it was against a poor opponent in Rocky Fielding. That was like Canelo fighting nobody. You can’t count Fielding as experience for Canelo, because he’s nothing like Kovalev.

Angel: What happens with Canelo after Kovalev fight?

“You remember who beat him [Kovalev], Andre Ward. That’s a big boy,” said Angel. “What happens after that,” said Angel in asking where does Canelo go after the Kovalev fight. “That’s a good fight too [Artur Beterbiev]. You’re making money, man. There are a lot of fights at middleweight. If Canelo gets f— up? What happens then? When Bernard fought last [against Joe Smith Jr.] and he flew out of the ring, and almost lost his life. He could have fell out of the ring and hit his head on the chair, and snapped his neck.

“The guy that played Superman [Christopher Reeves] fell off a horse and broke his neck. Is it worth it? This is a dangerous sport. People die all the time lately. With all these crazy a– trainers sparring these fighters every day. They’ve got them like punching bags in the gym. Beat them the f— up. When they come to fight, half of these guys have been knocked out a week before their fight, and everybody hushes it up,” said Angel.

Canelo will likely drop back down to 160 unless he beats Kovalev with ease. If Canelo easily defeats Kovalev, then he’ll probably stay at 175, and look to face IBF/WBC light heavyweight champion Beterbiev (15-0, 15 KOs).

“We’ll see how he do against those big guys,” said Jermall Charlo to Fighthub about Canelo’s fight with Kovalev. “Obviously, he gained weight like any of us. We could fight at 175 that we normal weight at. So, it’s just a fight that he doesn’t have to lose weight. So we’ll see how he fights and performs at. It’s a good stylistic match-up. Stylistically, a tall rangy guy.

“You got to keep him on the outside. You got a short guy that is strong, fast, and is going to come in with punches. Whoever with the best game plan, will have their hand raised. If we can see Kovalev use his jab, and not fight the way he fought Ward, I think he’ll do great,” said Charlo.

WBC middleweight champion Jermall Charlo isn’t quite sure what to make of Canelo’s fight against Kovalev next Saturday. Like everyone, Charlo is interested to see how the smaller fighter Canelo deals with the size of the taller Kovalev. This is the shortest fighter that Kovalev will have faced as a professional, and he’ll need to be able to adjust to the height and the slightly different angles of the punches.

Charlo says Golovkin vs. Derevyanchenko should have been a draw

“Man, I would have given him a draw,” said Charlo about Gennadiy Golovkin’s last fight against Sergiy Derevyanchenko. “That fight was real close. Like I said, there’s something about the jab, and something about guys that just want to throw big shots. Derevyanchenko was trying to land the bigger shots. He couldn’t really get Golovkin out of his game plan.

“That’s another good fight for me. Golovkin is reaching that point where is he going to keep going or not. Not really,” said Charlo when asked if he’s nothing that Golovkin is on the decline. “They said the same thing about Koby [Bryant], and you saw how he ended his career. And that’s Golovkin too. Some of the older guys get wiser, and they fight different and fight better under pressure as they get older. Some of them do better when they’re young,” said Jermall.

Charlo (29-0, 22 KOs) sounds like he’s being diplomatic with his comments about Golovkin out of self interest. The last thing Charlo needs is say Golovkin is looking over-the-hill, because he wants to fight him still. Golovkin (40-1-1, 35 KOs) did have a lot of problems in edging Derevyanchenko by a close 12 round unanimous decision on October 5. Derevyanchenko used the blueprint Canelo created against GGG, and did a better job with it. One can argue the reason Derevyanchenko didn’t get the decision against GGG is because he’s not as popular as Canelo.

Golovkin came on strong at the end with his big power shots, and landed the cleaner, harder punches. That was the reason the judges gave him the win.


« Josh Taylor with excellent options for next fight