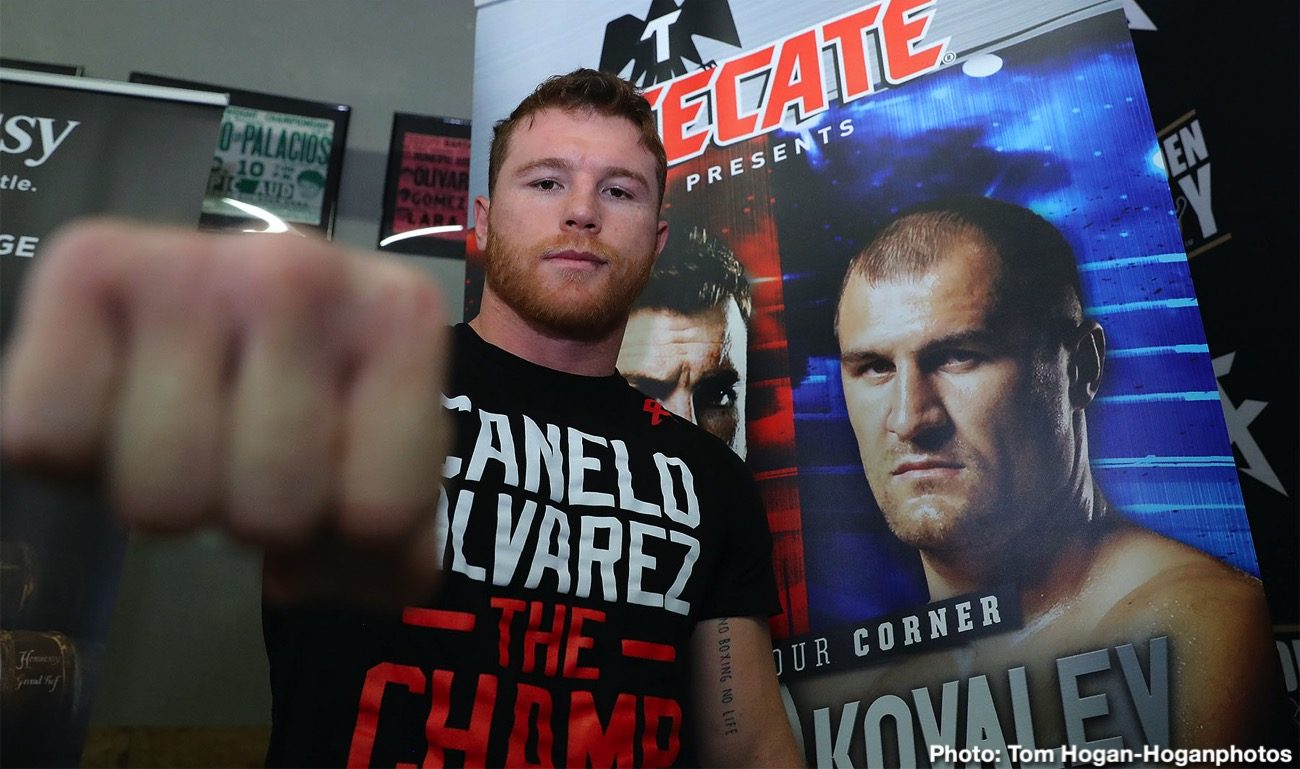 By Aragon Garcia: Saul Canelo Alvarez says he’s not sure if he’s going to move back down to 160 after he faces Sergey Kovalev on November 2. Canelo (52-1-2, 35 KOs) will be challenging Kovalev (34-3-1, 29 KOs) for his WBO light heavyweight title on DAZN at the MGM Grand in Las Vegas, Nevada. Canelo will likely make a decision on whether to move down based on how well be performs.

It’s understandable why Canelo would want to stay at 175. He wants to have huge challenges that make it interesting for him, and for his boxing fans. With Canelo’s recent wins over Gennadiy Golovkin and Daniel Jacobs, he’s exhausted the big fights available for him in the middleweight division.

The remaining fighters in the 160-lb division lack the popularity needed for it to be worthwhile. There’s no one really popular at 168. There are some good fighters in the division, but they don’t have a large following. But moving up to 175, Canelo will have huge challenges available to him against these fighters:

The light heavyweight division is now unquestionably the best in all of boxing. Canelo would be making a smart move in staying in this division rather than moving down in weight.

Canelo not sure if he’ll move back down to 160

“I don’t know yet,” said Canelo when asked if he’ll move back down in weight after the Kovalev fight. “He has a lot of experience. His fights with Bernard Hopkins and Andre Ward taught him a lot, but we’re ready for that experience. We have experience too,” said Canelo about Kovalev.

“Making a legacy for himself and history for myself,” said Canelo in asked why he’s moving up in weight. “No, I think he lost that fight,” said Canelo about Golovkin’s last fight against Sergiy Derevyanchenko.

“It’s very dangerous. I’m going up two weight divisions. That’s his division. He’s very comfortable in that division. That’s a division that he normally fights, so it’s a challenge for me. It’s going to be a challenging fight for me. I’m moving up, and he’s in his comfort zone,” said Canelo about Kovalev.

If Canelo stays at 175, he’s got at least nine good fights available to him. That’s not counting rematches. Moving back down to 160 would leave Canelo with no interesting fights. Matchroom promoter Eddie Hearn wants Canelo to fight Demetrius Andrade, but the boxing public doesn’t care about that match.

If DAZN wants to see the trilogy match between Canelo and Golovkin badly enough, then they’ll pay the money to make it happen. It might be better for DAZN to forget about it though, because Golovkin looks shot now. He should have lost his last fight to Sergiy Derevyanchenko, according to Canelo. DAZN would be a lot happier to see Canelo fighting Beterbiev.

“Canelo is going to kill him,” said trainer Freddie Roach to fighthype in predicting a win for Canelo over Kovalev. “All he has to do is stay in that weight class, and never go back down again.

“When guys go up in new weight classes, and go back down to their old weight classes, it always fails. Once you go up in weight, stay there. I think he’ll become a better fighter. He’s tired of making weight. He can be much stronger.

Kovalev looks like he’s not going to last long against Canelo. It’s unclear what kind of lifestyle Kovalev has lived outside of the ring, but he’s starting to look really old now. Kovalev has the appearance of someone that’s had a hard life. Hopefully, Kovalev is taking care of himself between fights.

“Yes, he can,” said Roach when asked if Canelo can beat Artur Beterbiev. “Beterbiev is a big name though. He looked really good the other night. His opponent, one of Teddy’s boys, looked good in his last fight before that. But Beterbiev hurt him each time he hit him though. He’s just a strong guy. I would love to train that guy,” said Roach about Beterbiev.

Beterbiev has got to be the new challenge for Canelo. A lot of boxing fans are saying that Beterbiev (15-0, 15 KOs) will beat Canelo. That’s the fight that Canelo needs to make after Kovalev.

Roach thinks Canelo should stay at 175

Canelo might stay at light heavyweight because he’s got to know that there isn’t anyone at middleweight worth fighting now.

Boxing » Canelo Alvarez » Canelo might stay at 175 after Kovalev fight