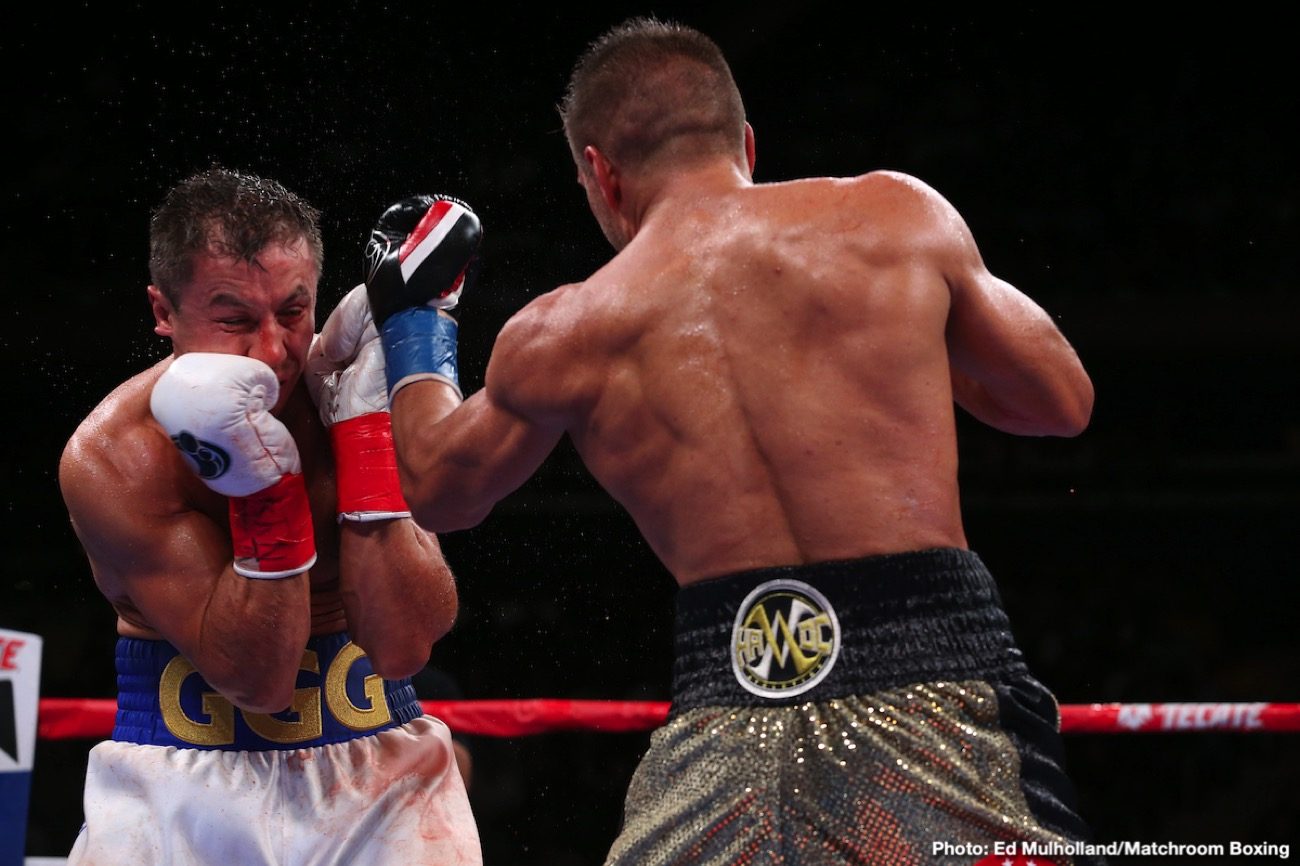 By Matt Lieberman: Gennadiy Golovkin will be looking to make an early defense of his IBF middleweight title in the first half of 2020 against Kamil Szeremeta if he can’t get the trilogy match against Saul Canelo Alvarez, according to @MikeCoppinger. The third fight with Canelo is the one that Golovkin (40-1-1, 35 KOs) wants, but if he can’t get that fight, then he’ll be trying to defend against his IBF mandatory Szeremeta (21-0, 5 KOs).

Instead of GGG waiting for the International Boxing Federation to order him to defend his newly won IBF 160-lb title against Poland’s Szeremeta, Golovkin will be looking to get it over with by taking the fight in the first quarter of 2020. If Golovkin can get his desired fight against Canelo Alvarez, then he would scrap the plans for him to defend against his mandatory Szeremeta.

Golovkin will be volunteering to fight Szeremeta

You don’t see champions too often volunteering to defend against a little known mandatory. Those are normally fights that the champions have no interest in making, because the fans won’t want to see them.

Golovkin with deal in place to fight Szeremeta

“Sources: GGG is interested in fulfilling his IBF mandatory early with a first-quarter fight against Kamil Szeremeta, and there’s a tentative deal in place. Barring a Canelo fight, Szeremeta is likely GGG’s next opponent. That and more for The Athletic,” said @MikeCoppinger.

It would seem pretty obvious that Golovkin and his management were already planning for their next fight last Saturday when they had Szeremeta fighting on the undercard of GGG’s fight with Sergiy Derevyanchenko. Szeremeta was put on the undercard against arguably weak opponent in Oscar Cortes (27-5, 14 KOs), who he knocked out in the 2nd round. Szeremeta, 29, isn’t a puncher by any stretch of the imagination.

The reason he got the quick knockout is because it was a mismatch. It was a showcase fight for Szeremeta to get boxing fans excited about him. Cortes had been knocked out previously in 2 out of his last 3 fights against Hugo Centeno Jr. and Francis Lafreniere. He’d also been knocked out in the 1st round by Francisco Javier Perez (18-12-1, 13 KO) in 2013.

GGG expected to be ringside for Canelo vs. Kovalev

There’s talk that Golovkin will be ringside for the November 2 fight between WBO light heavyweight champion Kovalev and Canelo Alvarez. He’s hoping that Canelo will give him the fight. Being at ringside will potentially create pressure on Canelo by boxing fans. The cameras from DAZN will obviously be on Golovkin constantly, and it’s predictable that he’ll go inside afterwards or at least try in order to call out Canelo.