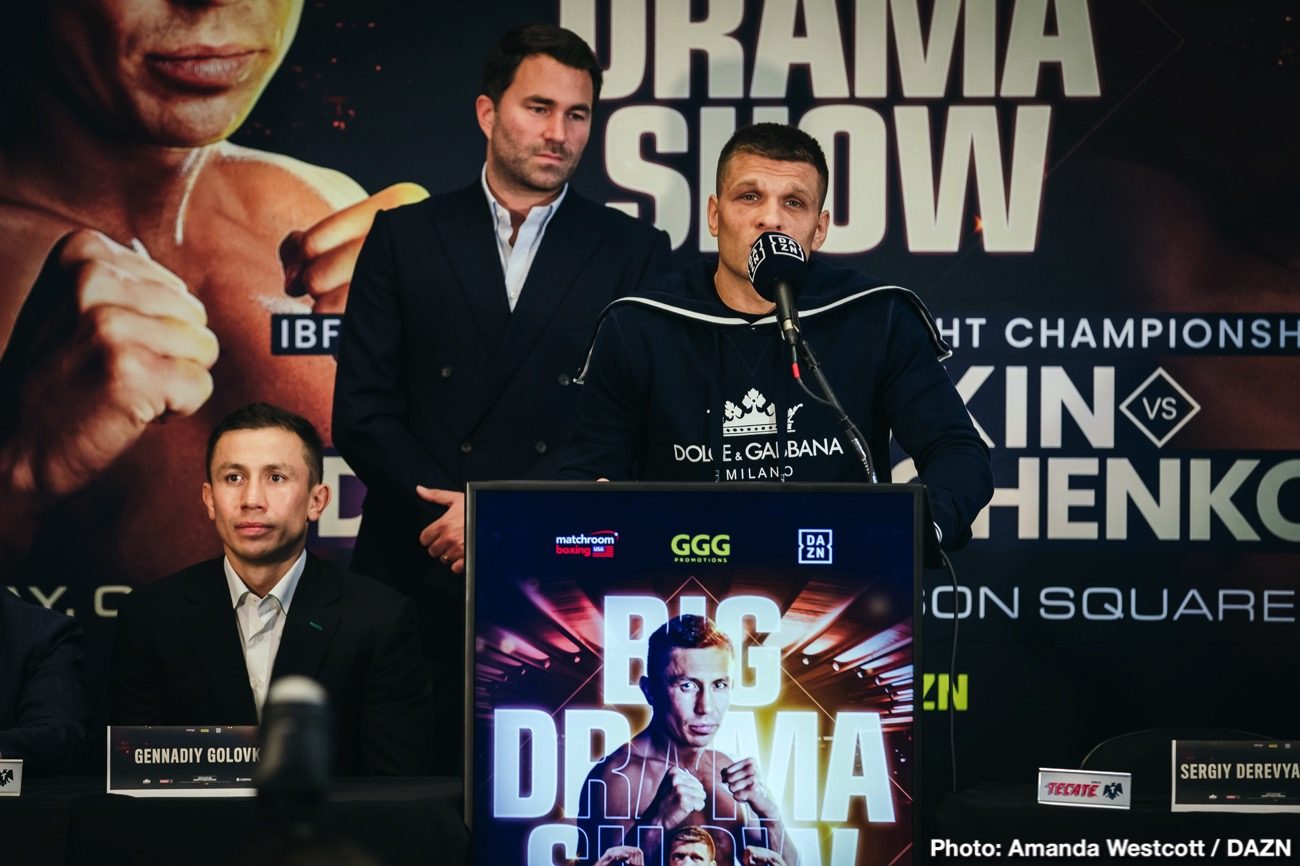 By Barry Holbrook: Gennady Golovkin is in action this Saturday night against the upset-minded Sergey ‘The Technician’ Derevyanchenko at Madison Square Garden in New York. The fan interest in this fight is lukewarm at best despite the heavy promotion by Matchroom Sport and DAZN. Golovkin has seemed distracted when giving interviews this week.

Golovkin and Derevyanchenko will be fighting for the vacant IBF middleweight title on Saturday.

Rather than speak about his opponent Derevyanchenko, GGG has talked of wanting to put together big “business” level fights against a popular fighter. It’s pretty clear that Golovkin (39-1-1, 35 KOs) is looking beyond his fight against Derevyanchenko

Derevyanchenko can wreck GGG’s dreams of trilogy fight against Canelo

“I have good legs, a good jab, and I move,” said Derevyanchenko to secondsout when asked what his advantages are against GGG. “And I move and jab. I see this fight [between Golovkin and Steve Rolls], and I think GGG is a long time not fighting. He needs an easy fight, because one year I think he’s not fighting.”

There’s not a lot of interest from the boxing public in this fight, and GGG hasn’t helped matters by not talking up the match enough. Golovkin has been pining away about the fish that got away with him complaining constantly about Saul Canelo Alvarez not wanting to fight him again.

Who can blame Canelo? GGG isn’t exactly setting the world on fire by facing Steve Rolls and now Derevyanchenko. The cool interest that fans have in the Golovkin-Derevyanchenko bout is telling. The fans are letting Golovkin know that they don’t care for the type of fights that he’s putting on nowadays. At least with Canelo, he’s facing guys that are a threat to beating him Danny Jacobs and Sergey Kovalev.

DAZN hasn’t exactly gotten the greatest deal since signing GGG to a six-fight deal. He’s fought little known 35-year-old Rolls, and now he’s fighting a guy that was recently beaten by Daniel Jacobs in Derevyanchenko. If Golovkin wins this fight, he’s talking about potentially making a mandatory defense of the IBF belt against the designated challenger selected by the sanctioning body. In this case, it would be Kamil Szeremeta, That’s a fight that would be on part with Golovkin’s last contest against Steve Rolls.

Derevyanchenko has the speed, experience and the boxing skills to beat Golovkin. The GGG that fans saw in his last fight against Steve Rolls, and in his rematch with Canelo is going to have a great deal of problems against Derevyanchenko.

Golovkin vs. Derevyanchenko is 50-50 fight

This is a 50-50 fight, whether Golovkin wants to admit it or not. Why would he? He’s too worried about the Canelo fight, and he’s not motivated the way he needs to be for his opponent this Saturday. Derevyanchenko is in his prime at 33, and he’s someone that would given Golovkin all he could handle six years when he was at his best. Golovkin shouldn’t have taken this fight with Derevyanchenko, because he’s not motivated properly to be ready for the fight that he’s going to be in.

In GGG’s last match against Rolls, he looked disengaged and lacking the proper motivation to fight hard. Rolls took advantage of that by landing a lot of brutal shots to the head of Golovkin in rounds 1 through 3. That loss to Canelo last year may have affected Golovkin more than people think. He’s not looked like the same fighter that arguably beat Canelo in their first fight in 2017.

Fortunately for Golovkin, his power bailed him out in round 4 when he caught Rolls with a left hook on the top of his head. Rolls wasn’t ready for the trajectory of the punch, as it came from an odd downward angle that he wasn’t expecting. Once Golovkin had Rolls hurt, he finished him with a left hook to the head that put him down face first on the canvas.

“We’ll see October 5th. [Demetrius] Andrade, Canelo, and [Jermall] Charlo,” said Dereyanchenko in namng the top fighters at middleeight that he wants to fight. “This guy is the top guy right now. I want this fight for the top guy. This guy is best for middleweight,” said Derevyanchenko.

This fight for Derevyanchenko is the equivalent of the Super Bowl for him in facing Golovkin. There’s everything for Derevyanchenko to gain in this contest. If he beats Golovkin, then there’s a very good chance that Canelo Alvarez will take advantage of the situation by quickly moving in and setting up a fight with Derevyanchenko. It’s a way for Canelo to solidly his status as the #1 middleweight without having to get his hands dirty by fighting Golovkin a third time.

“Maybe a little bit,” said Golovkin to the Breakfast Club Porter 105.1 when asked if he’s lost some punching power. “Maybe the last two years. Right now I feel it’s good, because I work with Johnathon. I have more speed, more timing and more distance. Before, I think I lost more interest in boxing. We had a contract for September 14th, but he said no. We have a contract with DAZN. I don’t know why [Canelo didn’t take the fight].

“He’s not afraid. He wants to stay a long more time with my belts. I don’t know what his strategy is, because right now it’s a bad situation with Golden Boy and with him. It’s so many problems. Speed boxing,” said GGG when asked how he beats Canelo in trilogy.

“If I stay the same, I think I win. Of course I want to knock him out. This would be hard, because he knows me a long time. We trained together six years ago. Three or four training camps we trained together, and sparred together,” said GGG about Canelo Alvarez.

Canelo didn’t take the fight with Golovkin last September because he didn’t have to. DAZN didn’t have a way of forcing Canelo to fight Golovkin. So instead of Canelo taking that fight, he skipped fighting on his normal holiday fight date in September, and chose to schedule a match against WBO light heavyweight champion Sergey Kovalev. It’s a better fight on paper than Golovkin’s fights against Rolls and Derevyanchenko, but still not a great one.

“He brings a new strategy, and new style and surprise. Right now I have a contract with DAZN for five fights. Right now my focus is on 160. If I don’t have no more fights against Canelo, then I’ll go up to 168. I promise to bring good drama show for this fight,” said Golovkin about his match against Derevyanchenko. “This is a good opponent, good event, and good show,” said Golovkin.

Golovkin will need to make the move up to 168 sooner rather than later, because Canelo isn’t likely going to give him a third fight. If Golovkin stays at 160, he’ll waste time fighting Kamil Szeremeta and Demetrius Andrade. Fans don’t want to see those fights. Golovkin’s co-promoter Eddie Hearn is eager for GGG to face Andrade, because he promotes him.