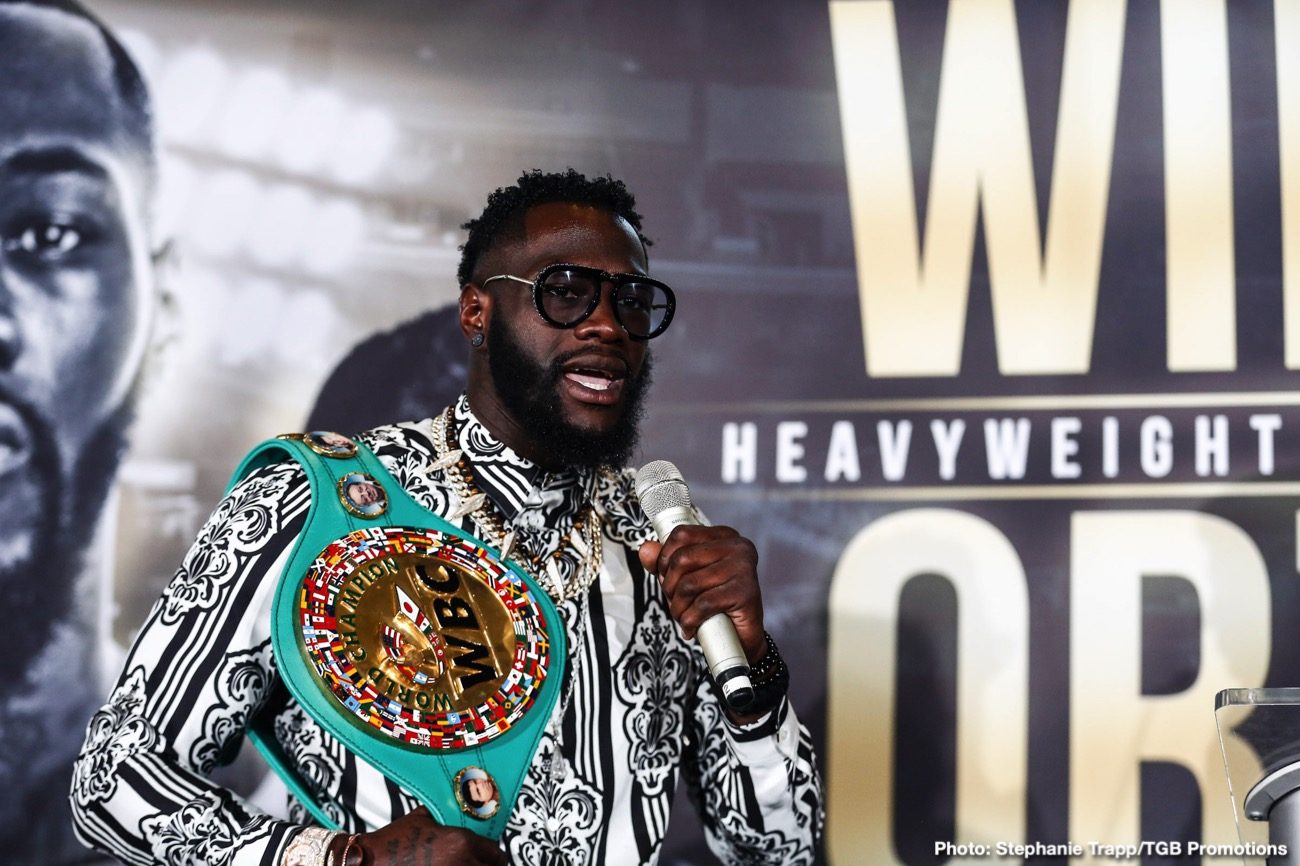 By Dean Berman: Eddie Hearn is predicting a victory for WBC heavyweight champion Deontay Wilder in his rematch in early 2020 against lineal champ Tyson Fury. The recent cut that Fury suffered in his fight against Otto Wallin on September 14 has put his rematch with Wilder in doubt for February 22.

Fury’s cut may not be fully healed by that date. If he’s stubborn about it fights on that date against Wilder, it could be a real blood bath.

Fury suffered a cut that required a whopping 47 stitches to close up over his right eye. With that big of a cut, the chances are high that Fury will have problems with that eye in his rematch with Wilder, as well many of his future fights

“I think Wilder wins that rematch. I really do,” said Hearn about the Wilder vs. Fury rematch in 2020. “I think he’ll be less cautious. I think he’ll know that he has the power to hurt him, and I think he’ll be a little more reckless. Wilder is at his most dangerous when he’s a little bit reckless. But you can’t be reckless against a good fighter, but I think this time he will be. Maybe,” it might go better for Fury.

“But I think he’s going to be more reckless this time, and come out and try and hurt him early; whereas he really didn’t in the last fight. And he’s been in there with Fury. Fury is unpredictable, and very tricky. But once you share the ring with him, you might start figuring him out,” said Hearn about Wilder solving the Fury riddle.

Last December, Wilder-Fury fought to a 12 round draw. There were a lot of fans that felt that Fury should have won, but many other fans saw it going Wilder’s way. It’s fair to say that Wilder appeared to win 5 of the first 6 rounds with his heavy shots that he was hitting Fury with.

In the 9th and 12th round, Wilder dropped Fury. With the good work that wilder did in the first half of the fight, as well as his two knockdowns, that should have been enough to get his hand raised. But not with the judging crew that worked the fight.

Although their fight was scored a draw, Hearn says that Fury (29-0-1, 20 KOs) “easily” beat him. Luckily for Wilder, Hearn wasn’t one of the judges that worked that night. Fury getting knocked down twice by Wilder didn’t impress Hearn one bit. He still thinks Fury won easily. The truth of the matter is Fury did NOT easily beat Wilder. In fact, the referee saved Fury by not stopping the fight in the 12th after he was knocked out cold. There was nothing easy about Fury’s fight with Wilder.

Fury has been exposed several times

“I think Fury has been exposed a few times, and just when you think he’s rubbish, he goes and puts in a good performance,” said Hearn. “So Fury rises for the big fights. He’s very tricky and awkward. Fury is a good fighter. He’s proved that, and I didn’t think he was.

Fury’s win over Wladimir Klitschko wasn’t easy. It was UGLY. He ran from Wladimir for 12 rounds, and narrowly won the fight. Wladimir landed the harder shots in every round of the fight, but the judges were more impressed with Fury’s movement and slapping shots.

“He was under-motivated,” said Hearn to Fighthype about Tyson Fury’s performance against Otto Wallin on September 14. “We’ve seen it from him [Fury] before. When you’re being told that you’re going to win, and it’s a bad fight. And then all of a sudden you’re fighting someone that is really hungry for it like Otto Wallin.

“Actually, he got away with it, because it was a good fight. If Tyson was on point, he would have won every round.

“With him being cut, as that goes, it actually should have been stopped. He probably should have lost the fight. Yeah, this can happen,” said Hearn about Fury’s cut that required 47 stitches.

The reason Fury had so many problems against Otto Wallin is because he was facing a big 6’6″ southpaw that wasn’t afraid to let his hands go. Unlike Wladimir, who fought timidly the entire fight with Fury, Wallin showed no hesitation in letting his hands go. When you fight like that against Fury, you’re going to give him problems. The 28-year-old Wallin being younger than the 31-year-old Fury also helped him.

Fury has really abused his body during his career, and all the weight that he lost, it aged him. Chronologically Fury is 31, but physically he looks like he’s 38. He looks the same age as Gennady Golovkin, who is 37. So if you’re a 38-year-old, and you’re put in with a 28-year-old fighter, like Wallin, you’re going to have problems. It’s not about Fury being unmotivated for the Wallin fight. He’s getting older.

“Anthony’s like, ‘Why do I have to fight all these top guys time and time again, lke [Wladimir] Klitschko, [Carlos] Takam, [Joseph] Parker, [Andy] Ruiz. Where’s my Otto Wallin? Where’s my Tom Schwarz?’ That’s what he’s saying,” said Hearn about Joshua wanting to take easy fights like Fury is doing.

“Yeah, but he’s had 23 fights, but he’s done that [fought good opposition], and that’s what’s made him different. So he had to fight Andy Ruiz, and then he’ll have to fight Otto Wallin after,” said Hearn

Who is Hearn trying to kid? Joshua has had dozens of easy fights during his career. It’s interesting how Hearn tries to get on his high horse and talk as if Joshua hasn’t been facing easy marks. Look at all these soft jobs Joshua has fought:

There’s at least five more soft opponents that Joshua has fought during his career. The point is Joshua and Fury are birds of a feather when it comes to the way they’ve been matched.

“It’s an easier fight,” said Hearn about Wilder’s November 23 rematch against Luis Ortiz. “When someone [in their late 30s] gets two years older. 72,” said Hearn when asked how old Ortiz is. “It’s a decent fight. It’s not a bad fight. The first fight was a good fight. I just think Deontay will deal with him inside four rounds,” said Hearn.

This might be an easy fight for Wilder, but maybe not. Ortiz is a southpaw with a lot of boxing skills, and he’s still an incredible puncher. Wilder was able to knock him out in the 10th round in 2018, but that was after he ran out of gas.

Ortiz took a lot of big shots from Wilder during the first nine rounds. In the 7th, Ortiz came close to knockout out Wilder after hurting him with a left hand. If Ortiz lands another big left on Wilder, he could stop him in the rematch.