David Price reacts to his loss to Dereck Chisora 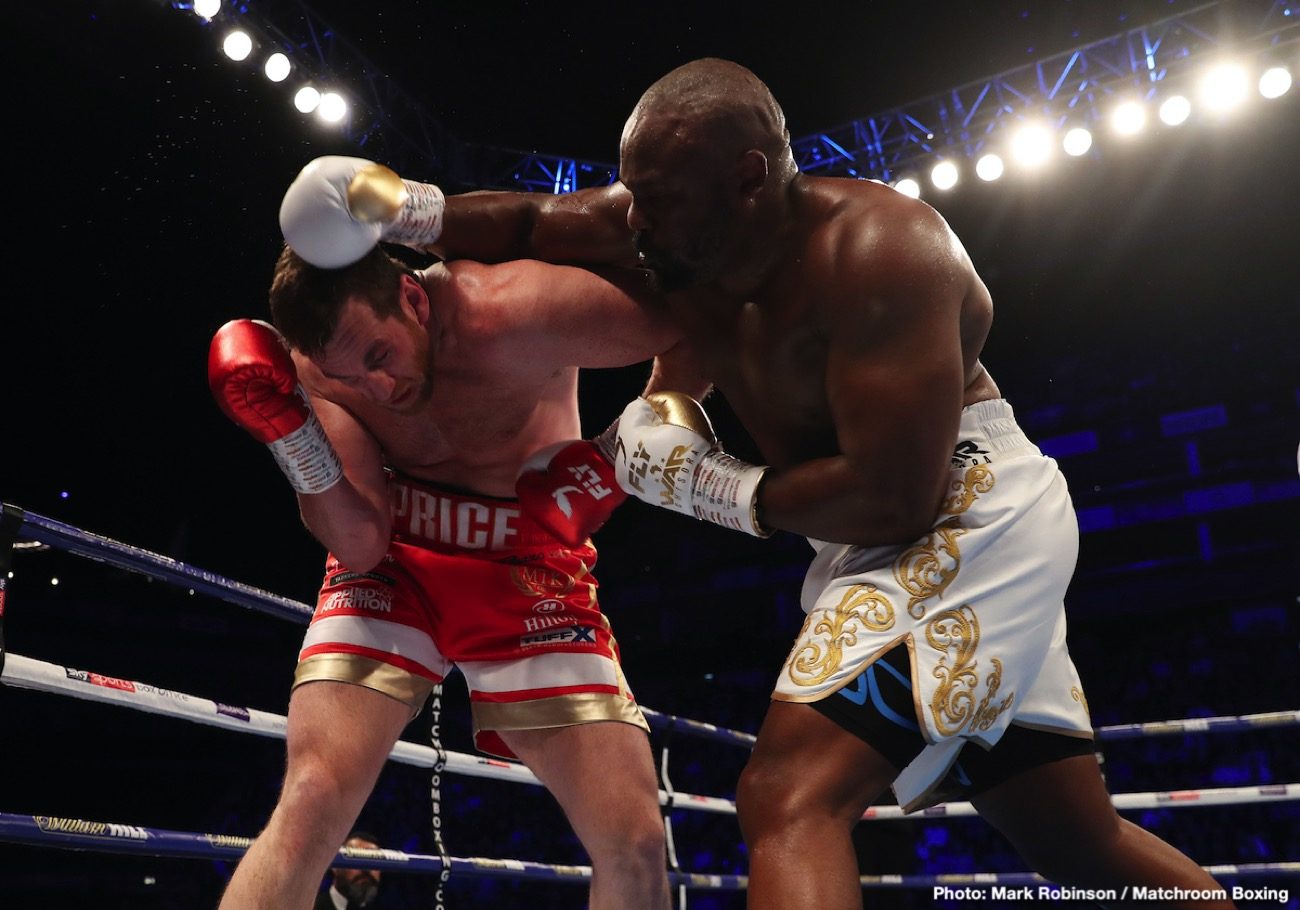 By Allan Fox: David Price (25-7, 20 KOs) tried his best in coming in on 3 weeks’ notice to face heavyweight contender Dereck Chisora (32-9, 23 KOs) on Saturday night, but he was quickly knocked out in the 4th round at the O2 Arena in London, England. Where Price goes from here is unknown. He can’t compete with first tier heavyweights, and he might not even be able to fight at the British level.

Price, 36, isn’t talking about wanting to retire from boxing. There’s a of curiosity from fans about whether Pricey will hang up his gloves after this disappointing defeat.

Chisora hit Price in the back of the head

After Price got back up, his corner threw in the towel. It looked like a hasty move on their part, as Price was never given a chance to try and recover from the knockdown the way normal fighters would. Price beat the count, and looked like he was ready to continue, but his trainer pulled him out anyway The time of the stoppage was at 2:00 of round 4.

This isn’t the first fight in which Chisora has hit one of his opponents in the back of his head. Chisora hit Kevin Johnson, Malik Scott and Carlos Takam with shots to the hack of the head. It’s not that Chisora tries to hit them there. Its just that’s where his looping punches tend to land. Tall guys like Tyson Fury were able to avoid getting hit in the back of the head against Chisora by leaning backwards. Price doesn’t know how to do that.

“I took a chance, and it didn’t pay off,” said Price to IFL TV in talking about his loss to Chisora. “And I knew I was going to be up against it under the circumstances. I just didn’t get going tonight. That was probably down to the preparation more than anything. Congratulations to him. It was a chance that I had to take. I don’t regret it. They showed compassion, first and foremost,” said Price in addressing why his corner threw in the towel,” said Price.

The loss wasn’t because of Price’s lack of preparation. It as more of a situation that had to do with his punch resistance or lack thereof. Getting hit in the back of the head obviously doesn’t help.

David Price says his balance was gone after getting hurt

“They were putting me first. I got hit in the back of the head, and lost my balance,” said Price. He’s got my best interest, and a lot of people would probably give their right arm for a trainer like that. I appreciate it. My balance was gone. So I lost the fight. I was definitely in better shape than I’ve been. And I kept in the gym. I just wasn’t firing tonight,” said Price.

Chisora was closing the gap too easily says Price

“It had to be done, and I don’t regret it. I’ve lost six times, and it was one more. I’ve been stopped seven times. Dereck has lost mostly on points. Whatever I decide to do, I’m happy and proud. Two years ago, I was finished in my mind,” said Price.

Price fighting with his back against the ropes was a dream come true for Chisora because he can beat fighters that do this. He falls apart when he faces guys that fight with their backs against the ropes. Price should followed the blueprint Agit Kabayel created in how to beat Chisora by using movement. Price is a plodder though, and is incapable of moving like Kabayel. He has a poor jab as well.