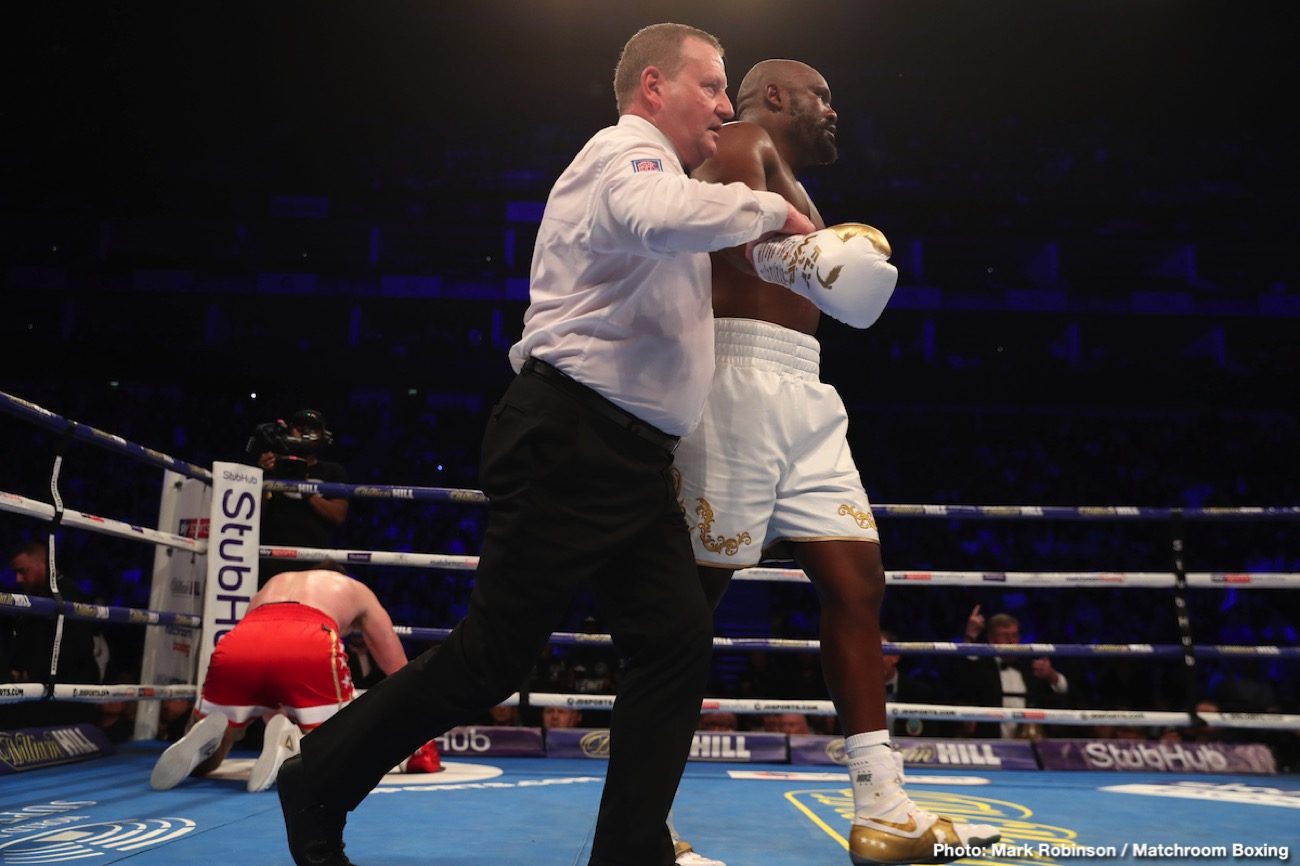 By Dean Berman: Derek Chisora (32-9, 23 KOs) says he wants to return to the ring on December 7th against Jarrell ‘Big Baby’ Miller or Joseph Parker on the undercard of Anthony Joshua vs. Andy Ruiz Jr. rematch at the Diriyah Arena, in Diriyah, Saudi Arabia.

Chisora, 35, took care of business on Saturday night in beating David Price (25-7, 20 KOs) by a fourth round knockout at the O2 Arena in London, England. It was such an easy fight for Chisora that he wants to get back in the ring as soon as possible on the Joshua-Ruiz 2 card.

That card will receive a MASSIVE amount of publicity due to the high interest from boxing fans in watching Joshua and Ruiz battle it out again. It’ll be televised on Sky Sports Box Office, and streamed on DAZN.

“David Price came in at the last minute and saved the show,” said Chisora afterwards to IFL TV. “He gave a good account of how many rounds we did. I set the pace up. I don’t think in the next round he was going to survive. He did well. And he caught me with a beautiful uppercut. I was dancing. He did really well. Amazing. I want to give a shout out to David Price, and I want to apologize for saying that I want to kill him.

Price had a short came in coming in on 2 weeks’ notice to fight Chisora, but it probably wouldn’t have made a difference even if he had a full camp. With the way Chisora was hammering Price with power shots in close, he would have been knocked out even with a 10-week training camp. What Price needed was a good jab, and a set of wheels to keep the fight at range. Price had neither going for him, so it was easy as pie for Chisora to walk him down.

Chisora ready to fight Parker, Miller or Usyk for December 7

“I’m ready for my next fight, and I’m trying to get Joseph Parker on,” said Chisora. “If I can get one [Parker or Oleksandr Usyk] in Saudi [on December 7th]. I’ll fight Big Baby Miller on AJ-Ruiz in Saudi.

“I’d be happy in Saudi in December. Yeah, 100 percent,” said Chisora when asked if he’d like to fight in Saudi Arabia on December 7th. “I’m ready to go. It’s going to happen. I want to fight in Diriyah [Saudi Arabia].

It’s not realistic to assume that any of those guys will agree to fight Chisora on six weeks’ notice. Price obviously was fine with facing Chisora on short notice, but Parker, Usyk or Miller won’t likely do it. They have too much to lose in facing a banger like Chisora without a full camp. Price had nothing to lose and everything to gain in fighting Chisora on 2 weeks’ notice.

Most likely, Matchroom Boxing promoter Eddie Hearn will need to dig up another 2nd tier level heavyweight to feed to Chisora for the December 7th card. Unfortunately, it’s now the norm for Chisora to fight lower level opponents, as tonight was his third straight fodder level guy. In Chisora’s two previous fights, he beat Artur Szpilka and Senad Gashi. Hearn will likely need to find a lesser heavyweight to match against Chisora. One can imagine who it might be.

David Price reacts to his loss to Dereck Chisora »