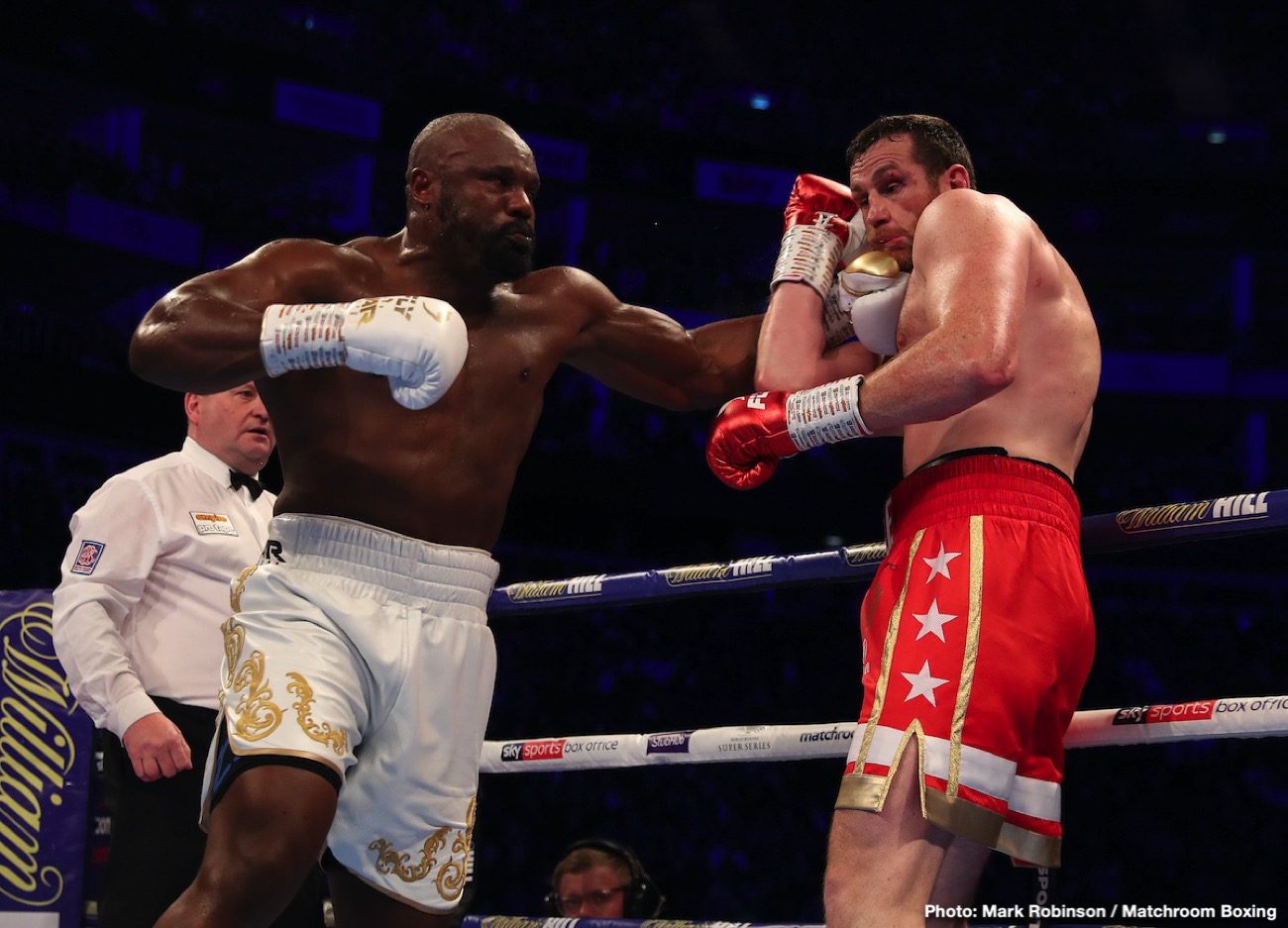 By Jeff Aranow: David Haye says he and Dereck Chisora both want Oleksandr Usyk for his next fight following his fourth round knockout win over David Price last Saturday night at the O2 Arena in London, UK. Chisora wants to make a quick turnaround on December 7th in Saudi Arabia.

Usyk’s promoter Eddie Hearn has already ruled out a fight between him and Chisora. Usyk just wants his title shot, and he clearly isn’t going to take any risky fights before he gets the fight. You can tell by the level of Usyk’s opponent for his heavyweight debut, he’s just looking to get a quick title shot without being exposed. Instead of fighting someone good in his heavyweight debut, Usyk fought 38-year-old Chazz Witherspoon.

Usyk not going to take any risks

This is a guy that is 10 years passed his prime. With the money Usyk is going to get in fighting for a world title against the Anthony Joshua vs. Andy Ruiz Jr. fight, he’ll be set for life from just that one fight. As such, he’s not going to risk losing that big payday by fighting 35-year-old Chisora, who would literally be swinging for the fences from round one to try and be the one that gets a title shot.

Hearn says he was given his marching orders by Usyk and his team that their next fight will be for a world title against the winner of the December 7th fight between Anthony Joshua and Andy Ruiz Jr.

Chisora (32-9, 23 KOs) knocked Price (25-7, 20 KOs) with a big head sshot in the fourth round. His corner then threw in the towel to have the fight stopped. Haye says that had they let the fight continue, Chisora would have knocked Price out.

Price had more in the tank says Haye

‘I’d like to give David Price the benefit of the doubt. He wasn’t completely out. And he has something out, but maybe his corner knew something that we didn’t,” said Haye to IFL TV. “He looked like he had a little more left in the tank. But sometimes a corner wants to look after their guy, and they didn’t believe he had anything left He was going to get the spark knocked out, and he would have gotten knocked out.

Price was 100 percent done after he was knocked down by Chisora in the 4th, and his trainer did the right thing in halting rather than letting him get poleaxed.

Anyone could have knocked out Price tonight. Haye makes it seem like Chisora was great for doing what other guys have already done to Pricey. Sergey Kuzmin, Erkan Teper, Tony Thompson, Christian Hammer and Alexander Povetkin all stopped Price BEFORE Chisora, and they’re not great heavyweights.

“I don’t think there are too many heavyweights that could handle that kind of assault,” said Haye in continuing to talk up Chisora’s win.. “He did what he’s trained to do in working behind his jab, and he ground him down. To break his heart, and use his inside work and bust him up. Not too many heavyweights can take that kind of heat. I’d like to see him in with Usyk, and Usyk is the mandatory with the WBO. It’s a possibility. Eddie [Hearn] likes that fight a lot. Whether it’s now I don’t know. I got to sit down with Eddie and talk to him. And I like Dereck vs. Usyk. I like it a lot. He’s been consistently training for a whole year nonstop.

“He probably had two or three weeks off the whole year, because he’s getting his body fitter and fitter. He’s fighting in two or three months, and he’s going to be fitter next time. At the moment it is,” said Haye when asked if the Chisora vs. Joseph Parker fight is dead in the water. “They had the opportunity and it didn’t happen David Price fortunately stepped up,” said Haye.

As Hearn said tonight, Usyk doesn’t want any other fight but a world title shot. He doesn’t want anymore warm-up fights. He’s already beaten 38-year-old journeyman Witherspoon in his heavyweight debut, and now he wants a world title shot against the Joshua-Ruiz winner. The World Boxing Organization gave Usyk the mandatory position because of what he did in unifying the cruiserweight division.

So Usyk doesn’t need to fight a good heavyweight or even a gatekeeper type heavyweight like 35-year-old Chisora. As weak as Uayk looked against Witherspoon, there’s a good chance he’d lose to Chisora. Some of the good heavyweight contenders would likely beat Usyk for sure. Even some of the young guys like Daniel Dubois would have a great chance of beating Usyk. He’s not going to be courageous when he’s already got a world title shot assured by the WBO.

“We’re looking to get Dereck in the position,” said Haye. “He’s 35. If he’s going to have a world title shot, it should be sooner rather than later. I doubt it, but you never know,” said Haye when asked if there’s a chance Chisora can fight on the Anthony Joshua vs. Andy Ruiz Jr. card on December 7th. “He’s fresh, and he wants to fight as often as possible now. He knows this is his last chance. So he fights regular,” said Haye.

It would be nearly impossible for Hearn to find a suitable opponent for Chisora to fight on the December 7th card. Chisora would likely want to fight in the co-feature spot, and that would be hard to do if he’s going to face another weak opponent. His last three fights have been against lesser guys in showcase [read: mismatch level contests] against Senad Gashi, Artur Szpilka and David Price. If this is the level of heavyweight that Chisora is going to be fighting on December 7th, then it would be a problem for Hearn to stick him in the co-feature spot once again.


« David Price reacts to his loss to Dereck Chisora