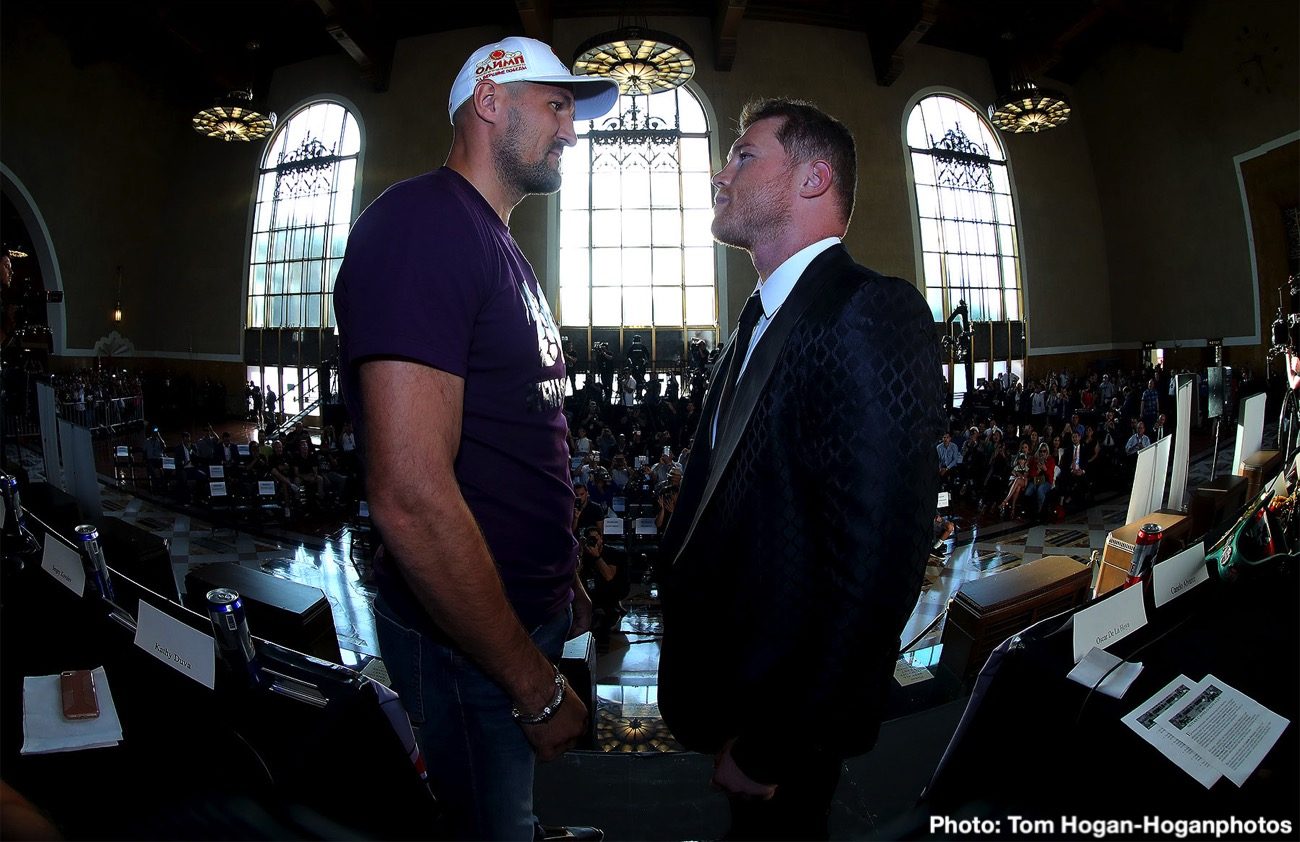 By Dan Ambrose:  WBO middleweight champion Demetrius Andrade says Saul Canelo Alvarez could get hurt next month when he challenges WBO light heavyweight champion Sergey Kovalev for his title at the MGM Grand Garden in Las Vegas, Nevada. Andrade believes that Kovalev (34-3-1, 29 KOs) is still dangerous at 36, and is still a “bad boy” with his punching power.

Canelo Alvarez (52-1-2, 35 KOs) will be looking to win his 4th division world title in moving up to 175 to take on Kovalev. The fight will be streamed live on DAZN.

Andrade (28-0, 17 KOs) wants Canelo to come back down to 160 so that the two of them can face each other in a unification fight. For now, Andrade will be defending his WBO 160-lb title against his mandatory challenger Steven Butler (28-1-1, 24 KOs) next in December on DAZN.

Andrade states that Canelo has picked another fighter that is on his way out of the sport in Kovalev to fight on November 2. Andrade doesn’t think too much of Canelo’s habit of fighting older guys that past their prime, and not the fighters they once were. Demetrius says Canelo in the past has fought fading fighters Shane Mosley and Miguel Cotto at a time in their careers where they were heading towards retirement.

Now Canelo is fighting Kovalev, who clearly is showing signs of deterioration at 36. Andrade fails to mention that Canelo didn’t fight Golovkin until he was 35-years-old. Some boxing fans believe that Canelo purposefully waited until Golovkin had gotten older before he finally agreed to fight him.

After fighting to a controversial draw against Golovkin in 2017, Canelo waited a year before fighting Golovkin in 2018. By that time, GGG was 36, and looking slower than he had in his first fight with Canelo.

“If I can’t get anybody in my weight class next year, I’ll go up t 160 to fight Billy Joe Saunders, and then I’ll become three-time world champion,” said Andrade to Fighthype. “He’s [Canelo] looking to become a Hall of Famer, and he wants to become a four-division world champion.

“There’s nothing wrong about him taking that route if that’s what he wants to do,” said Andrade about Saul Canelo Alvarez moving up to 175 to take on WBO light heavyweight champion Sergey Kovalev,” said Andrade.

Canelo wants to win Kovalev’s WBO 175-lb title, but he hasn’t said anything about wanting to keep the title and defend it. It’s likely a ‘catch and release” level title fight. Canelo looking to catch a big fish, and then let it go rather than stay at light heavyweight to take risky fights against the prime fighters Artur Beterbiev, Dmitry Bivol or Oleksandr Gvozdyk.

“I wouldn’t be surprised if he hurts Canelo. Is it a risky fight? Yeah, it still is. If Canelo wants to get his a– whooped, he’ll come down to 160, and be like, ‘I’m ready. Sign paper. I’m ready,” said Andrade.

Kovalev’s size, power and jab makes this is a risky fight for Canelo, because the Russian fighter is still dangerous. Sergey’s power is about as good as it’s always been. The drop off we’ve seen with Kovalev since 2016 is with his stamina, and his punch resistance. He’s lost to Andre Ward [twice] and Eleider Alvarez. Kovalev almost lost his last fight against Anthony Yarde.

Andrade: It’s time for me to fight GGG and Canelo

“The belts are with DAZN. So there’s no point in not making the unification bouts,” said Andrade to secondsout.com. “You can’t keep letting these guys fight anybody when you have someone like me with a belt at 160. It’s time for me to get in there with GGG, Canelo and whoever else is.

“I’ll definitely go up to 168 to fight Billy Joe. He deserves an a– whooping.  Nah,” said Andrade when asked if he wants to fight on the November 9th KSI vs. Logan Paul card. “If I had it my way, I’d like to fight on the Anthony Joshua vs. Andy Ruiz card.

“I’d like to be on that in the co-feature. It would make the fight bigger than it actually is. It would be massive if I was on that card. I was willing to fight Billy Joe Saunders when he was at 160 before he did his dirty stuff. As I said before, he needs to get his a– whooping from me. I’m willing to 168 to make it happen if I’m not getting the bigger fights and bigger names come next year,” said Andrade.