By Charles Brun: WBA light welterweight champion Regis Prograis says he was thinking that he might have had to get into it with heavyweight contender Dereck Chisora during last Monday’s press conference after Del Boy hijacked the event due to him being unhappy at being given second billing by Matchroom on the card. If Chisora and Prograis ended up in a slugging match, it would have looked bad.

Chisora’s argument was based on his fight against Joseph Parker being the one that is pulling in the fans.  He’s not arguing that his fight with Parker is a match between the #1 and #2 heavyweights in the division.

Dereck’s argument for headliner position based on his popularity

Chisora would have looked silly if he tried to say that he’s the best, because him and Parker are nowhere near #1 and #2 at heavyweight. They’re both fringe contenders at best. Chisora is better known than Taylor and Prograis, and that’s where he appeared to be coming from in arguing with Eddie Hearn. That’s the only place where Chisora could argue that he rates being in the main event. Both him and Parker recently lost to the same guy in Dillian Whyte.

Prograis says he knows a little Jiu Jitsu, and that he would have had to grab Chisora’s neck. Prograis fights at 140. He would have been giving away over 100 pounds to the 250+ pound Chisora.

It’s a fight between two fringe contenders at heavyweight.  Taylor didn’t speak up to help Prograis out when he was defending their position as the headliner. It would have looked brave on Taylor’s part if he’d helped Prograis argue with Chisora. Taylor was stone quiet.

Chisora (31-9, 22 KOs) wants his 12 round fight against former WBO heavyweight champion Joseph Parker (26-2, 20 KOs) to be the main event on Matchroom’s October 26 card at the O2 Arena in London, England.

“You’ve got love Dereck. He’s a great character for British boxing, and has been for a long time,” said Adam Smith to IFL TV. “He’s unpredictable. What he did today was probably premeditated. He wants more money from Eddie. That’s Eddie and David to deal with that side of it. What I didn’t like was he disrespected the other two Josh Taylor, and all the fighters. Prograis was going to have ago. I think he was tapped on the knee by his guy,” said Smith. 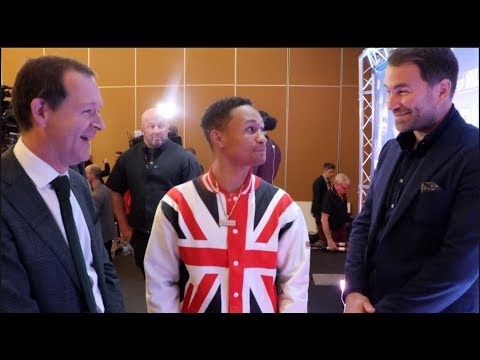 “I was thinking about it too, to be honest,” said Prograis to IFL TV about how he was thinking of getting into it with Chisora. “He’s a heavyweight? You know what? I know some Jiu Jitsu. So I would have had to grab his neck or something.”

Hearn currently has the light welterweight unification fight between Prograis (24-0, 20 KOs) and IBF champion Josh Taylor (15-0, 12 KOs) as the headliner. That match is not only a unification fight, but it’s also a battle between the #1 and #2 fighters in the 140-pound weight class. Further, the Prograis-Taylor fight is the final in World Boxing Super Series tournament. The Muhammad Ali Trophy is on the line for the fight, as is the Ring Magazine belt.

Adam Smith says Chisora should have given Prograis & Taylor respect

Smith: “He should give you respect coming over here, undefeated. People want to watch it, because they like it, and he’s in good fights.

Prograis: “When I first came out, I was jolly and happy, and then he [Chisora] kind of pissed me off. So I said, ‘We #1 and #2. Why wouldn’t we be the main event. You’re not #1 and #2,” Prograis said about Chisora and his opponent Joseph Parker. Let me bulk up and gain some weight.

“I thought him and Prograis were about to go at it,” said Hearn about Chisora.

Chisora says nobody knows about Prograis and Taylor

“I’m not going to be chief support to these guys. We’re going to need to change that,” said Chisora during Monday’s news conference. “I’m not going to be chief support. It’s as simple as. These guy wouldn’t sell Box Office by themselves. So f— that. So you either give me main event or pull me out of the show. No, I’m being serious. You want to put these little guys. Nobody knows about them on my show, and try and mug me off.”

Dereck: no one cares about little guys or the Muhammad Ali Trophy

Here’s the rest of the argument between Chisora and Regis:

Chisora: “Nobody cares about you, bro. To be honest.”

Chisora: “Don’t get me started, bro, or I’ll squash you.”

The only way to describe the Chisora vs. Parker fight is to say what the fight doesn’t involve. Chisora’s fight with Parker doesn’t have a title on the line, and it’s NOT a match between the #1 and #2 heavyweights in the division. There isn’t a Ring Magazine title on the line for Chisora-Parker fight, and there won’t be Muhammad Ali Trophy up for grabs. This isn’t a WBSS final. It’s just two heavyweights that were recently beaten by Dillian Whyte and Anthony Joshua.