Roach: Spence carried Mikey Garcia because he didn’t want to hurt him

Roach says Spence “carried” his last opponent Mikey Garcia, because he didn’t want to “hurt the guy” in their fight last March. A lot of boxing fans had the same opinion as Roach, as it looked like Spence was taking it easy on Mikey. It’s possible that Spence was thinking that could maybe get a rematch if he didn’t wipe Mikey out.

Roach says the 2012 U.S Olympian Spence in in another class compared to the 31-year-old Porter. He sees Spence crushing the over-matched Porter. The fighter that Roach thinks could give Spence problems is WBO welterweight champion Terence Crawford (35-0, 26 KOs).

“I don’t care if they have Odell.”

‘The Truth’ has no love for anything Cleveland! Time for Rapid 🔥w/ IBF Welterweight Champ @ErrolSpenceJr. (via @premierboxing) pic.twitter.com/svAiYNu9bY

“Right now, Crawford,” said Freddie Roach to Fino Boxing when asked who the #1 fighter in the world is. “Spence [#2]. They need to fight each other. The winner will be the best fighter in the world pound-for-pound. Yes,” said Roach when asked if Spence will beat Shawn Porter. “Spence kills him. A much better fighter. Different class. He carried Mikey Garcia. He didn’t want to hurt the little guy. Mikey Garcia wouldn’t be a bad match-up for Pacquiao. Maybe they might make it at 144 or something like that.

Manny walks around at 138 anyway. He has to eat extra meals to make 147. He only went to 147 for money. We would like to fight Mayweather one more time, but I think he’s sleeping somewhere crying. I thought Yarde would win that fight, but then I found out he doesn’t spar or do road work or something like that. When he got knocked out in the end, we know now why. I think that’s a very good fight, a very hard fight, but I like the guy [Canelo Alvarez] coming up,” said Roach.

“He was going to come to the Spence fight, and he was only at the Spence [vs. Mikey Garcia] fight by accident,” said Roach about Pacquiao. “And, he wasn’t there to be called out. ”

Roach’s comment about Crawford being the #1 fighter in boxing is one that many fans would disagree with, because he hasn’t fought anyone good yet. Crawford’s best opponent during his 11-year pro career is little featherweight Yuriorkis Gamboa, who was old and past it when he fought him. Crawford never fought any of the talented fighters at 140 or 147. 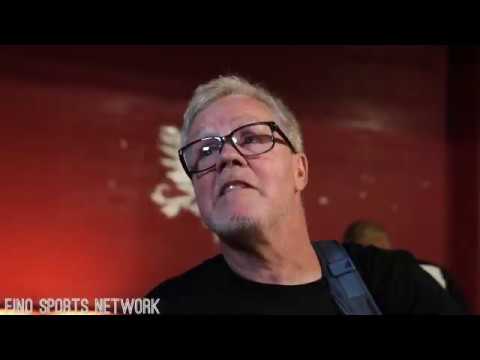 “I think GGG won the first one [against Canelo Alvarez], and in the second one he got beat really bad,” said Roach about Gennady Golovkin. “He lost every round. If the third fight happens, the same thing will happen. I think his [Golovkin] legs are shot, and I still say high altitude training isn’t good for fighters. And, I would like to see that fight [Canelo vs. Golovkin] again. I think it would be action packed. Both guys would show up, but I think he’ll win again,” said Roach.

Given that Canelo barely beat GGG in their rematch last September, it’s likely that Golovkin will win the third fight. He’s got a new trainer in Johnathan Banks, who is working on increasing his punch output. Banks doesn’t want Golovkin to back up anymore. That’s the mistake he made in his second fight with Canelo.

“I want Manny Pacquiao to fight Linares,” said Roach in mistaking Jorge Linares for Vasiliy Lomachenko. “He’s the one that has his dad training him. Lomachenko. I’m tired of hearing he’s the best fighter in the world, because he’s not,” said Roach.

Roach is dreaming in talking about Lomachenko fighting Pacquiao. That’s not going to happen. Lomachenko is moving back down to 130, because he’s starting to take punishment at 135. He’s a good fighter, but not like Pacquiao.