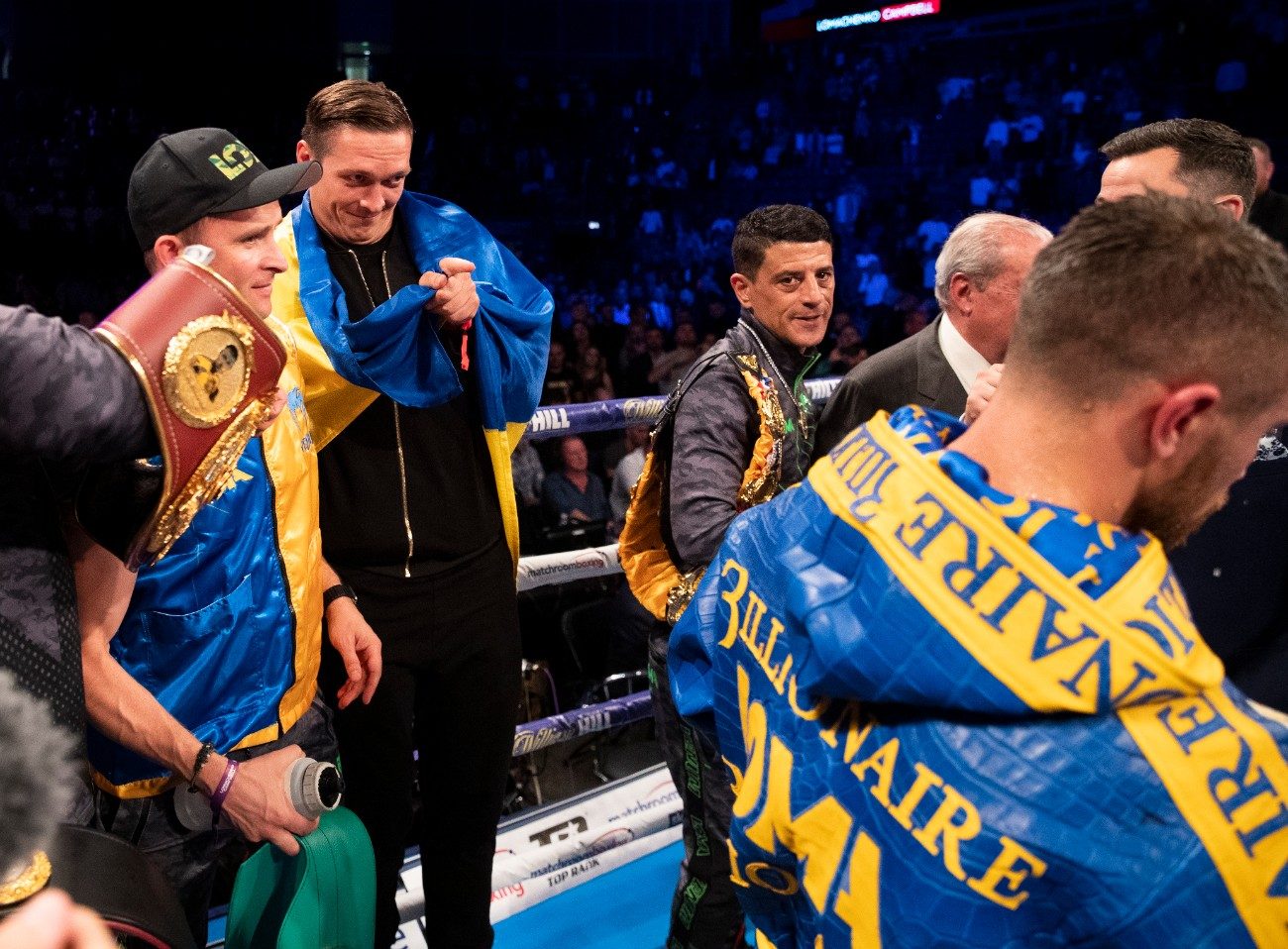 By Mike Smith: Oleksandr Usyk liked what he saw of last Saturday’s match between WBA/WBO lightweight champion Vasiliy Lomachenko (14-1, 10 KOs) and Luke Campbell (20-3, 16 KOs) at the O2 Arena in London, England. Usyk (16-0, 12 KOs) was present to watch his friend Lomachenko successfully defeat Campbell by a 12 round unanimous decision to win the vacant WBC 135-lb title on Sky Box Office PPV and ESPN+.

The win for Lomachenko, 31, puts him in the poll position to face the winner of the Richard Commey vs. Teofimo Lopez fight for the IBF title.

“It’s very good. Luke Campbell is very special,” said Usyk to secondsout. “Vasily had good camp. He’s a good fighter. It’s boxing,” said Usyk in being asked if he was surprised at the success that Campbell had against Lomachenko. “I don’t know. Maybe Tyson Fury,” said Usyk upon being asked who can challenge Lomachenko. “My next fight is 12 October. It’s Tyrone Spong. I don’t know [how to pronounce his name]. Stop,” Usyk said when asked if he’s ever seen him fight before.

Lomachenko put on a boxing clinic in getting the better of Campbell. It was from easy for Lomachenko, being that the 5’9″ Campbell had a big size advantage. The combination of  Campbell’s size and power made him a formidable foe for Lomachenko. What hasn’t been mentioned about Campbell’s performance was the huge pressure that he put on Lomachenko. Campbell didn’t let the two-time Olympic gold medalist rest for a minute inside the ring last Saturday, and this led to him looking haggard at times.

Usyk made it clear during the interview with Radio Raheem last Saturday that he’s not familiar with his next opponent Tyrone Spong (14-0, 13 KOs). Spong go through his fight last Saturday in stopping Jeyson Minda (14-2, 8 KOs) in the 2nd round at the Gimnasio Polifuncional, in Merida, Mexico.

The win for Spong clears the path for him to face Usyk next month on October 12 at the Wintrust Arena in Chicago, Illinois. This will be Usyk’s heavyweight debut after having fought the first six years of his pro career at cruiserweight. He unified the division in 2018, and he’s been out of the ring since his win over Tony Bellew last November.

This is a shout out to Luis Ortiz for giving me the work, and letting me work with him. It helps me, but at the same time I know that I’m helping him too. So it was good. I give him his respect and his props, because like I said, he’s one of the best. The best technical boxer to me in my opinion. Just to be able to train with him and compete with him did a lot of good things,” said Spong.

It sounds like Spong hasn’t had too many opportunities to spar with world class heavyweights in the past. He’s going to be over his head when he gets inside the ring with 2012 Olympic gold medalist Usyk on October 12. When Spong has going for him is his punching power. He’s got a lot of power, but he’s not a bigger puncher than Murat Gassiev. That’s a guy that Usyk easily beat last year in the final of the World Boxing Super Series tourney in Russia. Usyk will likely jab Spong frequently to minimize his work rate, and win an easy decision.