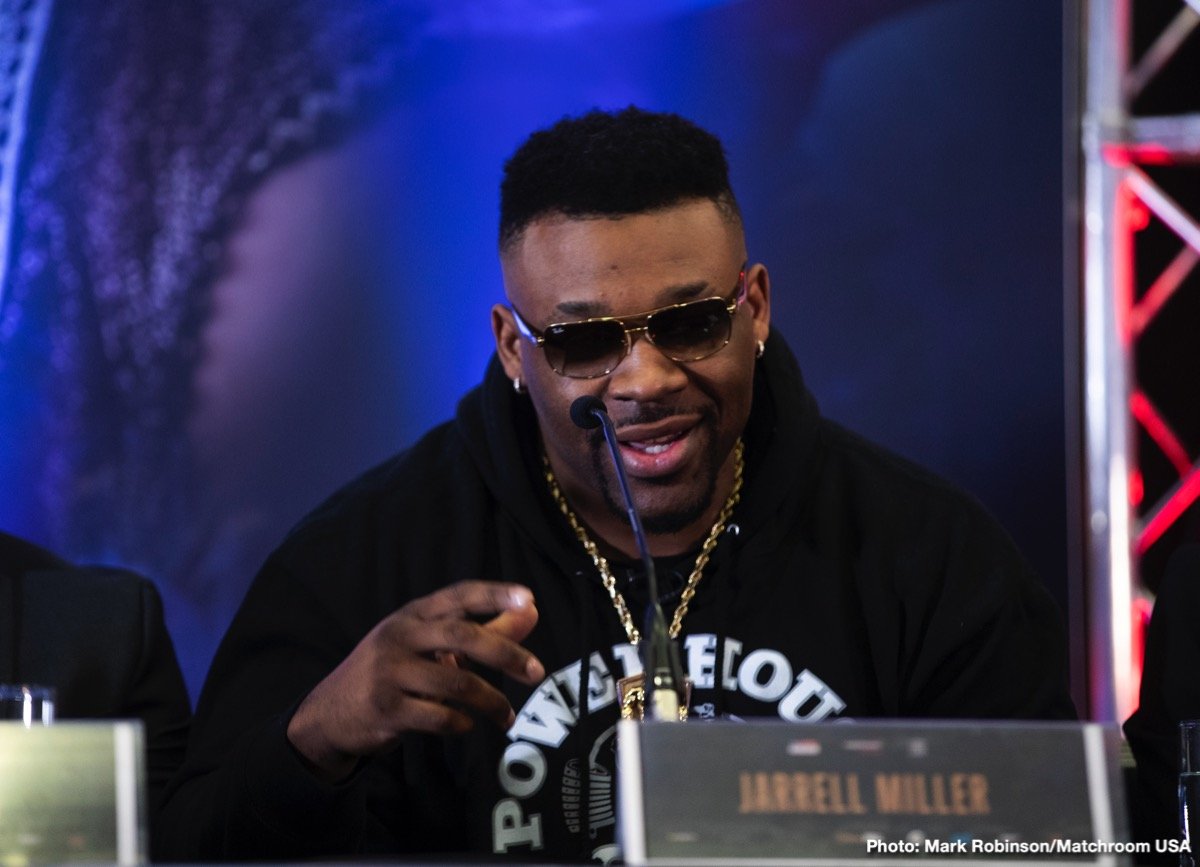 By Jeff Aronow: WBA Gold heavyweight champion Joe Joyce (10-0, 9 KOs) has answered back to Jarrell ‘Big Baby’ Miller’s challenge of him by saying on social media that he’ll fight him as long as he’s drug free. Miller (23-0-1, 20 KOs) will be free to fight soon following failed tests and a suspension.

‘Big Baby’ Miller had been signed to challenge former IBF/WBA/WBO champion Anthony Joshua on June 1, but he had to drop out of the fight after a positive drug test.

Miller, 31, took to social media this week to challenge the 2016 Olympic super heavyweight silver medalist Joyce. Big Baby Miller wants the 6’6″ Joyce to send him the contract for him to sign.

“Somebody is getting their heads taken off,” said Jarrell Miller on social media. “I hear what’s his name…Joe Joyce wants to fight. Tell that retarded boy he don’t want no smoke with me at all. Send me the paperwork. Joe Joyce wants some work.”

This would be a hard fight for Miller to take  coming off of what would be a one-year layoff from boxing. Miller’s last fight was against Bogdan Dinu in November 2018, and he stopped him in the 4th round. That was a mismatch, and not much of a fight.

Although the 33-year-old Dinu had an unbeaten 18-0 record going into the fight with Miller, the majority of his victories had come against obscure lesser fighters in his home country of Romania. In Dinu’s last fight, he was stopped in the 7th round by 39-year-old Kubrat Pulev last March in Costa Mesa, California. Pulev isn’t a puncher, but he still had no problems knocking out Dinu.

Joe Joyce responds to being called out

“As long as you are clean, I’m going to f–k you up!
@frankwarren_tv Make this happen! #THEJUGGERNAUT”

Joyce was recently interested in defending his WBA Gold title against former WBA heavyweight champion Alexander Povetkin and former world title challenger Carlos Takam. It’s unclear whether either of those two guys will accept a fight with Joyce. It would be risky for those two guys to take on the ‘Juggernaut,’ because he’s got so much size an strength. Takam and Povetkin are both 6’2″, and would be giving away four inches in height to the 6’6″ Joyce, who some compare to a young George Foreman.

📄 Jarrell Miller tells Frank Warren “send my people the contract” for a fight with Joe Joyce next, as he counts down the days to the end of his WBA suspension.

Joyce has recent wins over Bryant Jennings, Bermane Stiverne, Alexander Ustinov, Joe Hanks and Iago Kiladze. Stiverne is a former WBC heavyweight champion. Joyce stopped him in the 6th round last June in an impressive fashion. The knock on Joyce is his hand speed is glacially slow, and his defense poor. But he more than makes up for his lack of speed and defensive skills with his power, and his ability to move around the ring.