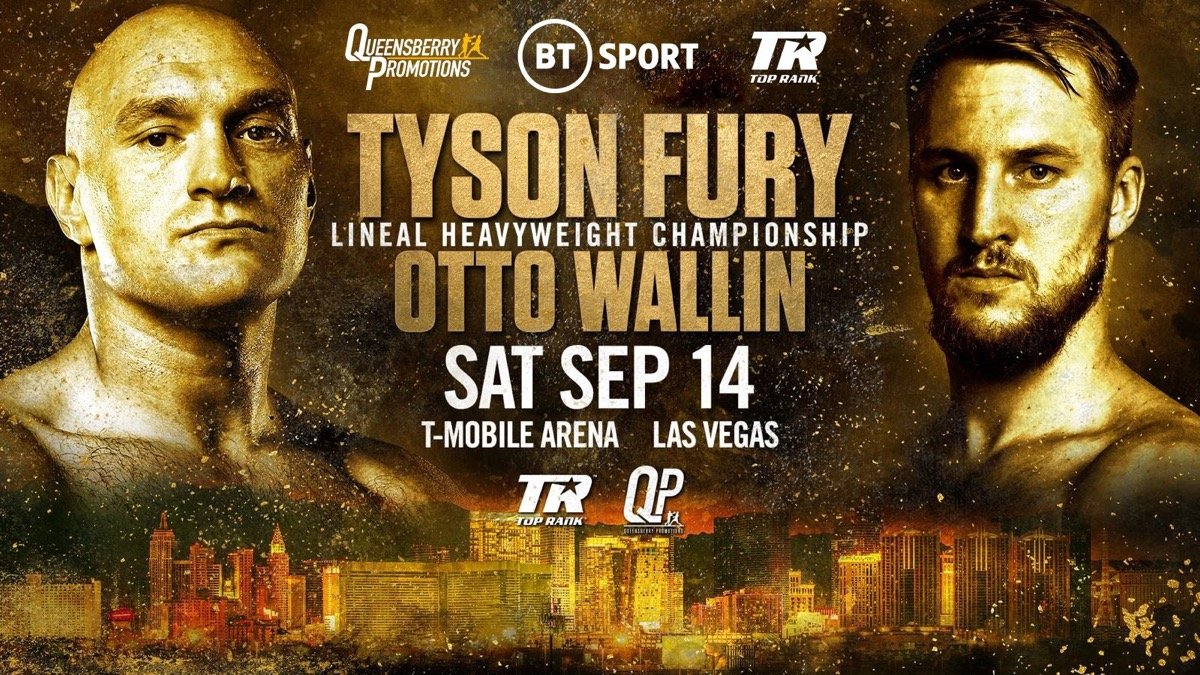 By Allan Fox: Lineal heavyweight champion Tyson Fury’s title defense against unbeaten Otto Wallin (20-0, 13 KO) is eight days away for their match on September 14 on ESPN+ at the T-Mobile Arena in Las Vegas, Nevada. Fury (28-0-1, 20 KOs) says he plans on having fun in beating the ambitious 28-year-old Swedish heavyweight Wallin.

This is basically practice for the 31-year-old Fury to get him ready for his rematch with WBC heavyweight champion Deontay Wilder on February 22 next year. With the huge payday that Fury will be getting fighting Wilder, his promoters at Top Rank doesn’t want to take any chances by having him fight a good heavyweight. So they found Wallin among the contenders in the upper tier of the division, but he’s one of those guys with an inflated ranking. His ranking is well above his actual talent in the eyes of a lot of fans.

Wallin has a little bit of pop in his punches

If he can land one of his shots flush on the chin of Fury, he might finish the job that Wilder (41-0-1, 40 KOs) started last December. Fury was knocked out in the 12th round, but the referee gave him what many boxing fans saw as a long count. Instead of stopping the fight, the referee looked at Wilder celebrate, and then eventually started counting rather than stopping the fight. Fury was still to the earth. 100 referees likely would have stopped the contest on the spot, but not this one. If Wilder shook something loose in Fury’s head, Wallin could capitalize on that if he lands one of his shots with full power.

Fury says he’s not altogether excited about fighting the 6’6″ Wallin, but he was the best available heavyweight that would fight him. He says the following heavyweights were considered for his September 14 fight:

Wallin could spoil Fury’s fun by knocking him out

The young gun Wallin, 28, will be looking to keep spoil Fury’s fun, and at the minimum set himself up for a rematch against the 6’9″ British heavyweight. If Wallin is lucky, he could be the one that challenges Wilder in February, but that’s doubtful. Top Rank will likely insist on Fury still challenge Wilder, even if he’s coming off of a loss to Wallin. No doubt, it’ll look bad for Fury fighting Wilder with him coming off of a defeat against Wallin, but Top Rank isn’t going to take a chance of letting this opportunity slip away from Tyson.

“I don’t think it’s about power, it’s the speed of the next blow,” said Fury in talking about Wilder. “Let’s face it; I was very inactive for a long time. It was the first time I had received a proper punch in years, so maybe the blows he gave me wouldn’t even affect me today,” said Fury.

Fury can’t afford to take another big shot from Wilder

There’s a very good chance that Fury would be knocked cold once again by Wilder if he were hit with a similar shot in their rematch. Wilder weighed only 212 pounds when he fought Fury in 2018. In Wilder’s last fight against Dominic Breazeale, he bulked up to 223 pounds, and seemed to have even more punching power. When Wilder meets up with Fury in 2020, he could be even heavier.

It’s not about Fury’s punch resistance improving. It comes down to basic physics. When a fighter with the kind of power that Wilder has lands a shot flush on the chin of his opponents, they’re most likely going to go down. Fury was on the move most of the fight with Wilder, and that enabled him to survive a lot longer than he otherwise would have. It’s clear that Fury was knocked out by Wilder in the 12th, and was given time that he probably shouldn’t have given his condition.

#MTKFightNight at York Hall on Nov. 9, Live on ESPN+ »