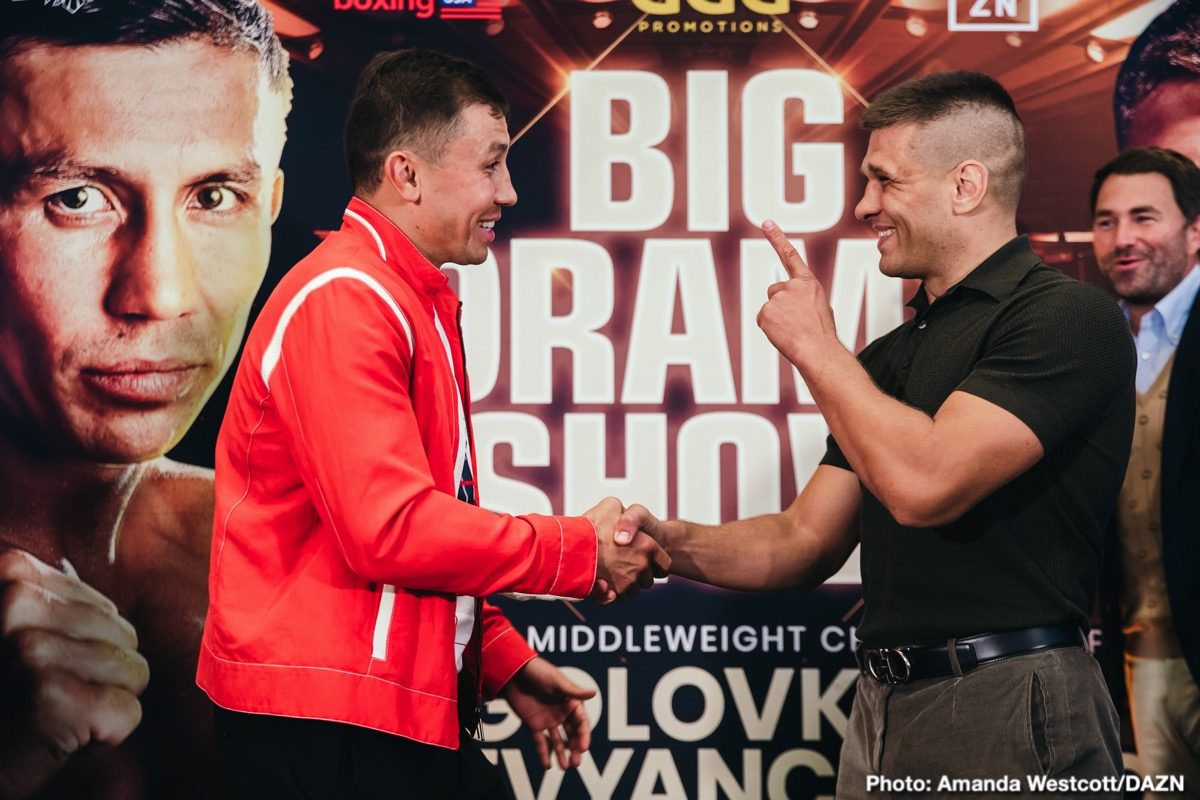 By Matt Lieberman: Gennady ‘GGG’ Golovkin (39-1-1,35 KOs) has less than one month to go before he competes for the vacant IBF middleweight title against #1 IBF Sergiy ‘The Technician’ Derevyanchenko (13-1, 10 KOs) on October 5 on DAZN at Madison Square Garden in New York.

This is a must win for Golovkin. He needs a victory over the younger 33-year-old 2008 Olympian Derevyanchenko to help him earn a trilogy fight against Saul Canelo Alvarez. That’s the fight that Golovkin wants and needs for him to get back to #1 in the middleweight division. Thus far, GGG has made it easy for the 29-year-old Canelo to steer around him, because he’s not been fighting the elite lately.

Golovkin also had a long nine-month layoff following his 12 round unanimous decision loss to Canelo last year on September 15 in their rematch in Las Vegas, Nevada. When GGG did return to action, he chose 35-year-old Steve Rolls, a fighter that few boxing fans had ever seen or heard of.

“It is all about development. My goal for GGG is not only be a better fighter, but also a fighter with a better volume of punches,” says Golovkin’s trainer Johnathon Banks to Cornerman Boxing. “Letting his hands go instead of just looking for one punch. It’s not good. He’s always going to have that power, but to me it’s about how you use it. Do you look for one punch or do you let your hands go, and let the chips fall where they lay,” said Banks.

It may prove to be an impossible task for Banks to get Golovkin to change the way he fights at this point in his career. GGG has always been such a careful fighter throughout his amateur and pro career. Getting him to change his way of fighting may ultimately end in failure, and it might be pointless for Banks to even try. From what we saw in Golovkin’s last fight against Rolls, he was the same guy that struggled against Canelo. GGG didn’t let his hands go except for the 4th.

Rolls was selected from the bottom of the World Boxing Council’s top 15 rankings. Although GGG beat Rolls by a 4th round knockout, he looked sluggish at times, and not firing on all cylinders. The only time Golovkin looked good was in the 4th round when he opened up with some big shots to knockout Rolls. Banks, who recently took over for Golovkin’s longtime trainer Abel Sanchez, wasn’t entirely pleased with his performance. He wanted Golovkin to throw more punches, but he didn’t, and he let Rolls have a lot of success in the first three rounds. Had Golovkin listened to Banks and thrown more punches from the start, the fight likely would have ended a lot sooner.

Banks wants to see improvements in GGG’s next fight

Golovkin’s new trainer Johnathon Banks is counting on seeing improvements in his game from his last fight against Steve Rolls last June. Banks wants Golovkin, 37, to break his bad habit of looking for one punch instead of just letting his hands go. He feels that GGG is a better fighter when he’s throwing a lot of shots, because his power is good that it wears his opponents down. Banks wants Golovkin to be more of a pressure fighter than he already is, and he feels that’s what was missing from his two fights against Saul Canelo Alvarez.

GGG didn’t throw enough punches in those fights, and he let the smaller fighter Canelo back him up. Banks says he didn’t like seeing that from Golovkin. It gave the judges and the boxing public the perception that Canelo was in control of the fight. It’s unclear what Golovkin thinks about Banks wanting to change his fighting style. If he’s resistant to Banks’ efforts to change him, then that would explain why he didn’t throw a lot of shots against Rolls.

As a pro, Banks learned under the tutelage of legendary trainer Emanuel Steward out of Detroit. Banks later became the trainer for former heavyweight champion Wladimir Klitschko after Steward passed away in 2012. It’s possible that Steward would have pushed Golovkin to increase his punch volume if he trained him.

One can imagine the way Steward would have been all over GGG in between rounds, urging him to throw more punches in his two fights with Canelo. Steward did that a lot as Wladimir’s trainer in pushing him to be more aggressive, and throw more punches. Wladimir wasn’t the same fighter after Steward passed away. The aggressiveness that Wladimir had with Steward as his coach was gone after his death.

“You don’t look for one punch. You look for multiple punches,” said Banks in talking about Golovkin. “That’s what he was doing with [Steve] Rolls. He started letting his hands go, and Rolls ran into a shot he never saw. That’s pretty much how GGG’s talent opens up and develops. The more he opens up, and lets his hand go, the better he looks. It’s just more of the same stuff,” said Banks when asked what changes Golovkin will use in preparation for his October 5 fight against Derevyanchenko.

Less than a month to go 💥🥊 pic.twitter.com/ztkEEgbJVY

It’ll be interesting to see if Banks can transform Golovkin into the fighter that he wants him to be. We know from watching GGG’s many career knockouts, he’s more effective when he throws nonstop shots. Golovkin’s best success against Canelo came in the later rounds when he stopped looking for single shots as much. When Golovkin was putting his shots together, Canelo was wearing down, and looking ragged.

The shots that Canelo threw at Golovkin lost a lot of the steam on them, because he wasn’t able to get his rest breaks. In both fights though, Golovkin gave Canelo too many breaks with the way he was always waiting, and looking for one shot. This allowed Canelo to time him, and land judge-pleasing counter shots. If Golovkin had just attacked Canelo with an all out assault in an Aaron Pryor style of fighting, he likely would have worn him down fast and won.

Banks: Golovkin can beat anybody if let’s his hands go

“In my opinion, anybody GGG fights, if he just let’s his hands go, and doesn’t look for one punch, he beats anybody,” said Banks. “I don’t see anyone standing up to him, getting hit over and over again by someone that hits with a ton of bricks. And, I just don’t see it. I could be wrong. I’m not saying I know it, but I’m saying right now, I don’t see it,” said Banks.